We’ll admit, when you see ancient temples nearly every day for nine months you can get a little bleary-eyed and jaded…but our visit to Sukhothai was anything but an ordinary stop in Southeast Asia. While going through our photos for this post we realized we had forgotten how stunning and cutting-edge the first capital of Siam was. Literally translating to “Dawn of Happiness,” Sukhothai was said to have sparked a Golden Age in Thailand and become the model for the country’s architecture, politics, monarchy and religion. Today Old Sukhothai is a quiet little town with a massive 193-temple complex to make UNESCO swoon. It was a lovely place to get lost for a few days (especially Saturday nights when they light the temples!) and a solid way to end our six-week tour of Thailand.

The Sukothai Historical Park is basically divided into two sections—the dense and highly preserved central complex and the wilder sprawling ruins to the northwest. The central complex was a natural and dazzling place to start with three-square kilometers of regal ruins interspersed with moats, lakes and bridges to island-bound chedis. 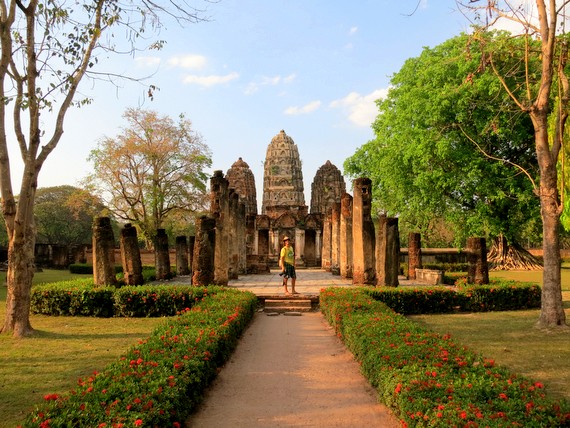 Before it became the capital of Siam, Sukhothai was an outpost for the Khmer empire. The style of this temple is distinctly different but acts as a bit of inspiration for the developing Sukhothai aesthetic. (Thanks audio guide!). 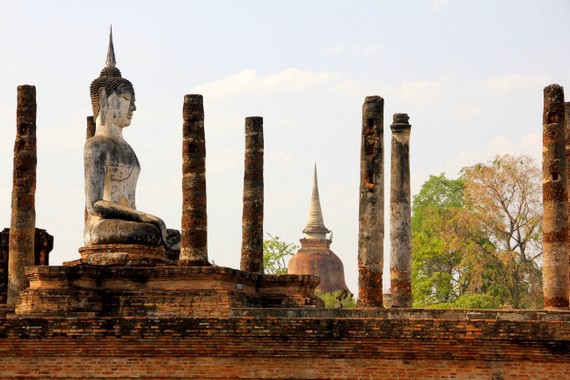 The Mat Mahathat section is one of the most spectacular and most extensive with assembly halls, religious buildings, and massive Buddhas to leave any visitor in awe. 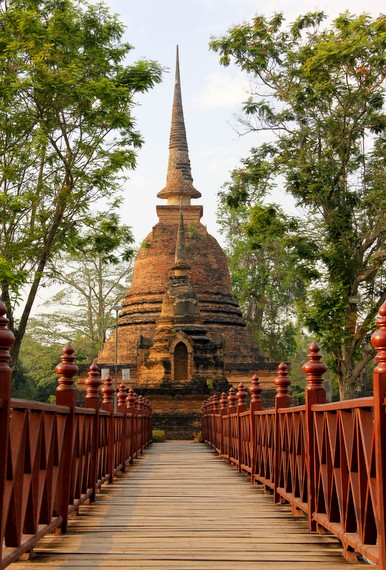 “Historical Park” sounds like a cheesy name but the way the ruins unfold across the lush grounds made it a fitting title. To visit this temple you walk down a long shady promenade across a footbridge to the middle of a lake…that’s a cooler experience than your average “archaeological site.” 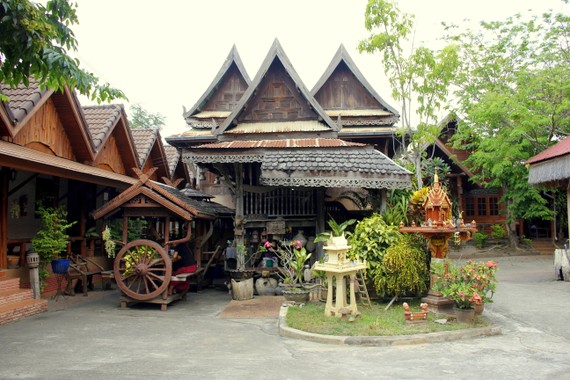 No, this isn’t another ancient ruin…it’s our hostel, Old City Guest House! Gotta love that they went the extra mile for style and still only charged $7 a night. We popped back here for a few evening-picnic supplies, to reserve our bicycles for the following day, and then set back out to the Historical Park. 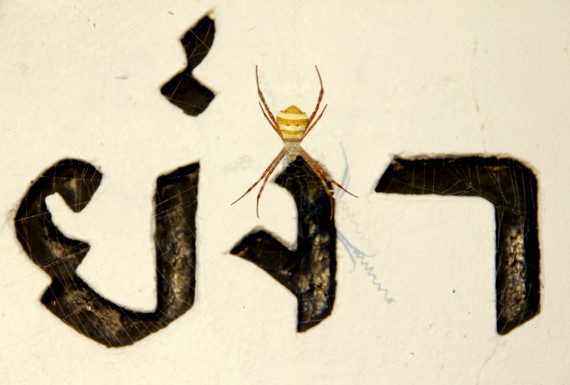 Okay, Mike and I have this debate nearly every time we edit photos for a blog post: “Beauty vs. Meaning.” We try to choose images that help us tell a story, which often relegates some of the best detail, nature, and arty shots to the slideshow (so if you love photography or you want to really dive into a location we visited, make sure to always check our slideshows at the bottom of each blog!). So to get Mike’s spider pic in this blog and also satisfy my editorial sensibilities…I’ll tell you that this spider is walking on the Thai Alphabet that was invented by Sukhothai King Ramkhamhaeng. Win win! 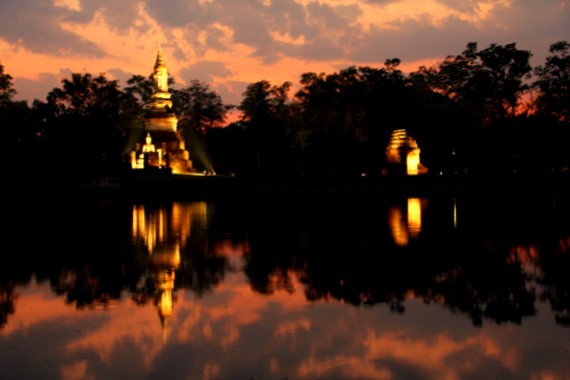 Now back to our evening at the UNESCO world heritage site! As luck would have it, we were in Sukhothai on Saturday night–the one time per week that the historical park stays open late and lights the ruins. We took our picnic to one of the lake islands for sunset and watched the reflections of the hot pink sky and golden temples mix in the water like an Impressionist painting. 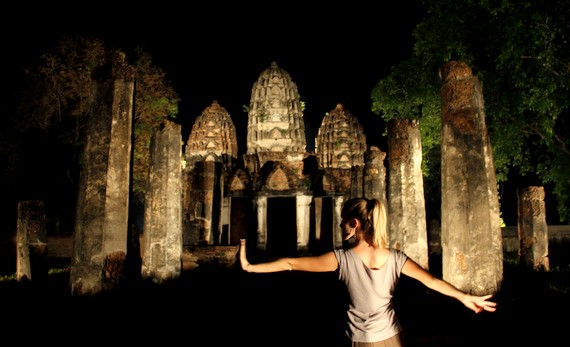 Once the sun went down, we ventured back into the ruins with a bit of trepidation. Somehow in the dark, you think less about the architecture and more about the people that once roamed here….and perhaps the ghosts that still do! 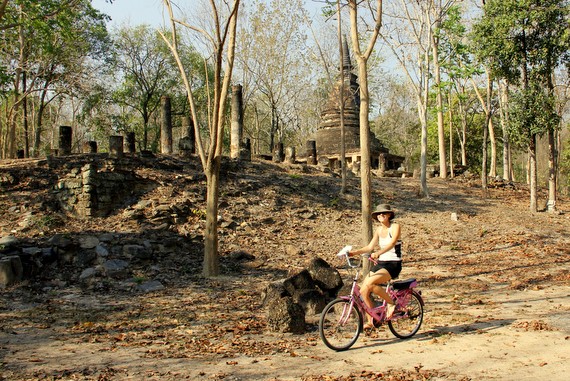 We woke up at sunrise to bike the northwestern ruins before the mid-day heat. The ruins aren’t maintained as well in the outskirts but happily this means very few tourists. 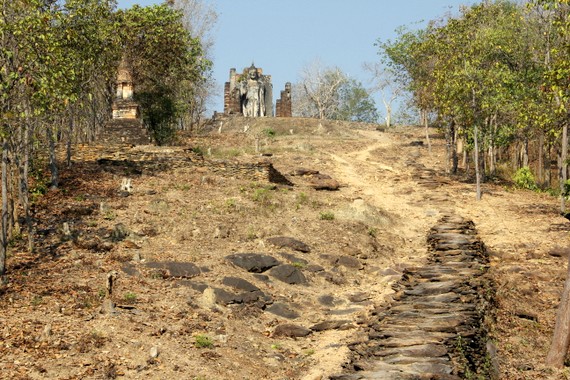 The most impressive in the group was Wat Saphin Hin. We parked our bike and climbed the hill to see the temple where King Ramkhamhaeng, the honorary founding father of the Thais, would arrive each sabbath on his white elephant to pray. 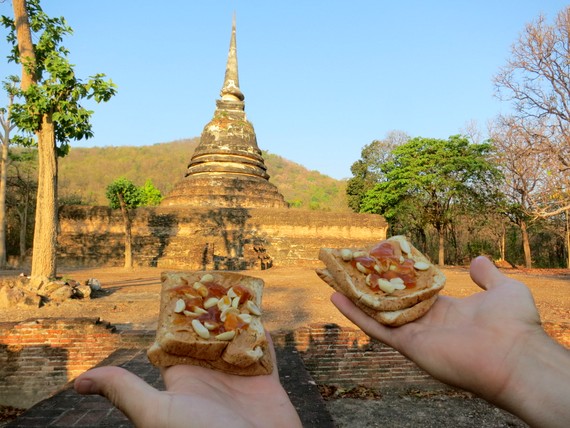 We had this neighboring chedi all to ourselves for a hearty breakfast of trail mix and peanut butter sandwiches–a HoneyTrek Classic! 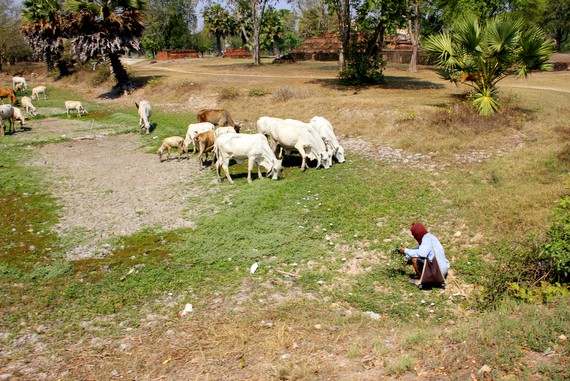 With a protein-packed belly, we rode east toward to the large Wat Phra Pha Luang complex. Passing the smaller and more dilapidated temples, you’d see shepherds bringing their herds to graze between the ruins. 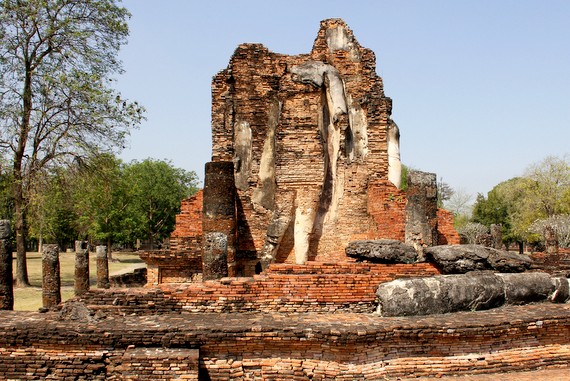 The stucco reliefs of Wat Phra Pha Luang have faded away in the most beautiful and surreal way. It’s as if this figure is vanishing before us.

Our final temple on our bike loop was Sorasak, the charming wat propped up by stucco elephants. Once again no one was to be found at this pristine temple except for a few locals collecting tamarind pods. We joined them, gathering a bunch of these sweet snacks (they taste almost exactly like Fruit Rollups!) for our night bus to Bangkok. 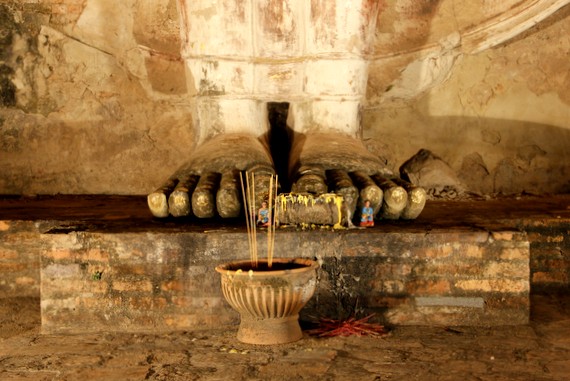 Half way between Chiang Mai and Bangkok, Sukhothai is a fabulous stopover…but most people seem to travel directly between the two cities and miss this UNESCO gem. If you visit Thailand we hope you make time for Sukhothai…you’ll appreciate it no matter how many temples you’ve seen!

7 thoughts on “Sukhothai: The Golden Age of Thailand”