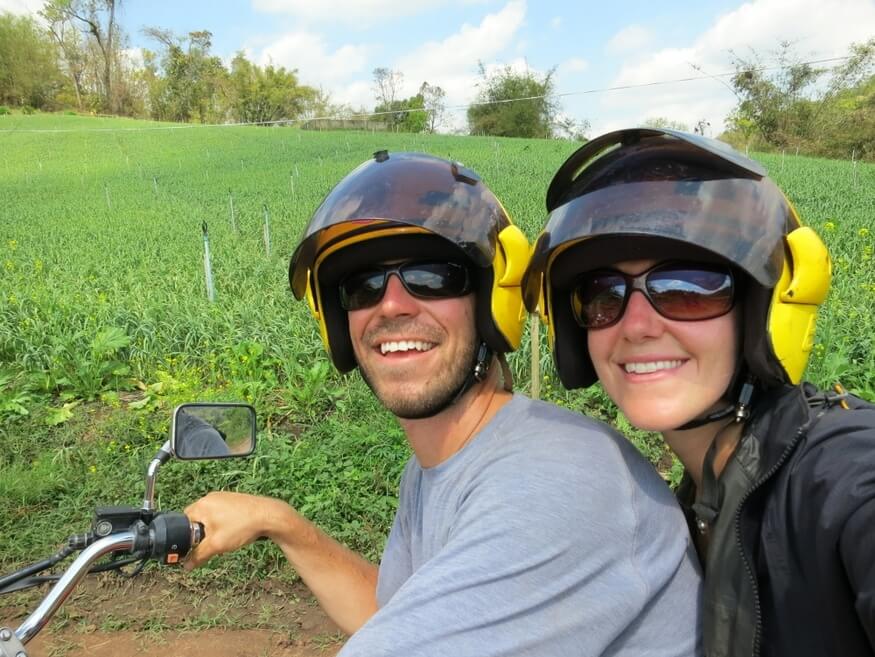 Sometimes the biggest snafus turn out to be the best experiences and our botched road trip from Chiang Mai to Pai, Thailand is at the top of that list. We’d heard great things about this 600km loop through the mountains and villages of the Mae Hong Son province so we rented a proper 500cc motorcycle and mapped out a fun five-day trip. Our only pre-planned stop was The Mindful Farm, a co-op and meditation retreat opened by a former Buddhist monk, then there was an unexpected detour….Let’s just say it kept us from ever reaching Pai, but showed us the ultimate kindness of strangers and memories we will never forget. 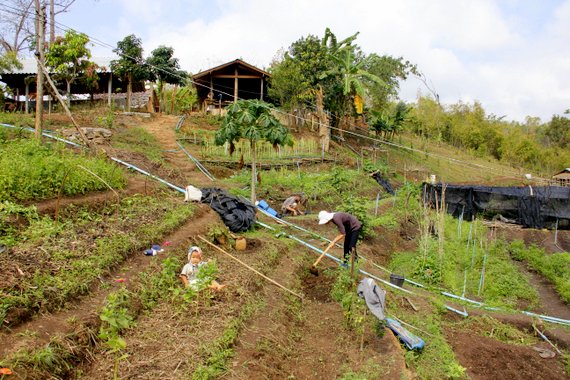 We arrived to the Mindful Farm covered in dust from our three-hour drive from Chiang Mai and joined men, women and babies in the terraced fields. The owner Chinnaworn, a petite man wrinkled from sun and smiles, came over to greet us and explain a bit about the farm. He told us, “It begins with a love story…” Chinnaworn was a Buddhist monk until he fell head over heels for his now wife Noriko. He gave up his monkhood to be with her but was determined to find a way to share his teachings with her and others. Together they started the The Mindful Farm, a community-tended plot with a few acres of vegetables, mud shelters, a shared kitchen and meditation room. With an ethic of sustainability, hard-work, and good intention with every action, Chinnaworn and Noriko try to have as little impact on the land and the most impact on its visitors. 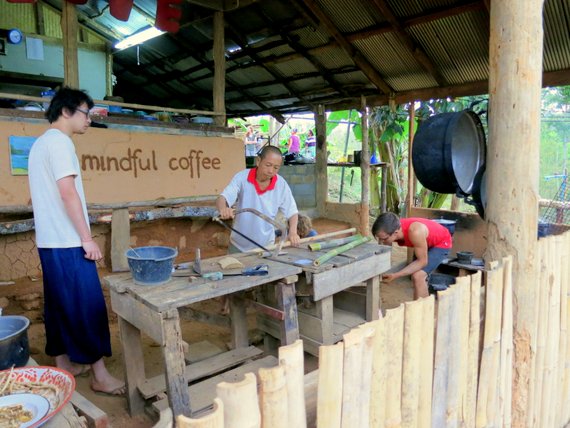 Everyone volunteered for various tasks needed to run the farm … construction, planting, harvesting, cooking, etc. These boys were getting a lesson from Chinnaworn on bamboo fencing, while Mike and I were assigned to weeding and harvesting. We gathered carrots, lettuce, tomatoes, and passed them to the group that was preparing dinner. When we walked in the kitchen a few volunteers were making homemade peanut butter and de-shelling coffee beans for a roast. Nothing on the farm comes easy…learn to make what you want or learn to lose the desire for it. 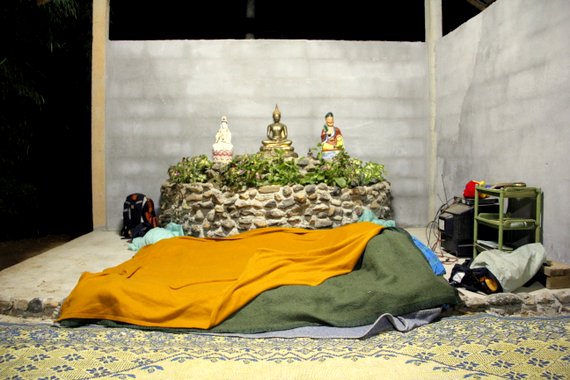 We gathered in this large open room for dinner and were asked to eat in silence to think about the food on our plate, the earth that grew it, the farmers that harvested it, the chefs that prepared it, and the way it nourishes our bodies. This exercise in meal meditation still reminds us to think twice before scarfing down our food. After dinner Chinnaworn led a group meditation with a reading about doing every act with intention (ask us about the lesson on dish-washing sometime), then everyone returned to their huts for sleep…except us. The rooms were all full and the only available sleep space was the farm shrine. It was the closest to the Buddha we’d ever been on so many levels. 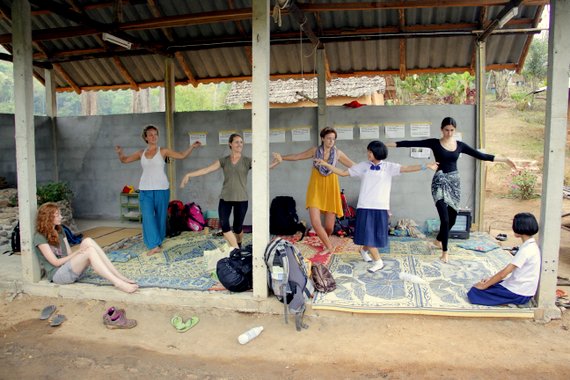 The next day we worked reclaiming flower beds, fertilizing, and planting. Time in the fields gave us an opportunity to chat with other volunteers, some who had been there for months! We had no idea how immersive and spiritual this place would be … if we had known, we would have planned to stay for at least a week! Alas our bike rental was only for a few days and the road to Pai was calling. On our final afternoon we took a Lanna Thai dance class, thanked Chinnaworn for this incredible experience, and set off with an open heart and mind. 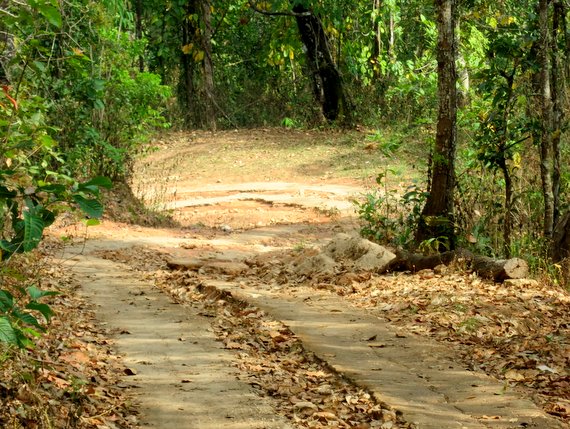 Trying to follow the squiggles on our vague GPS map, we thought we found a shortcut to the Pai highway. It may have been shorter but straight, flat, or paved it most certainly was not. We were swerving to stay out of ditches and potholes and not tear off our tailpipe and realized the weight and instability of a second body was not helping. I got off and walked up the mountain to lighten the load….but the mountain was still winning. 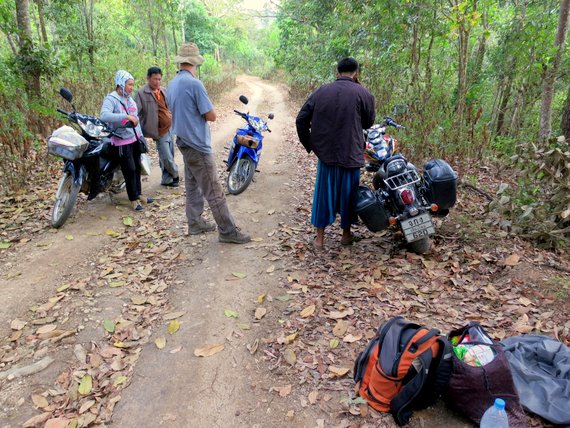 Clutch, gas, clutch, slip off six-inch wide concrete track, clutch, stop, clutch!!! Crash. The clutch officially gave out in the middle of nowhere and we didn’t have the tools or the cell reception to get us out of this. Trying not to have an emotional breakdown, we had to sit put and hope somebody would eventually stop and help us. Enter our Back Roads Guardian Angel, Pepitome!!! He was clearly drunk and with no mechanical skills, but Pepitome was determined to help. He flagged down the next driver and we all caravaned back to Pepitome’s house, where he insisted we stay for food and shelter until our bike situation was repaired. 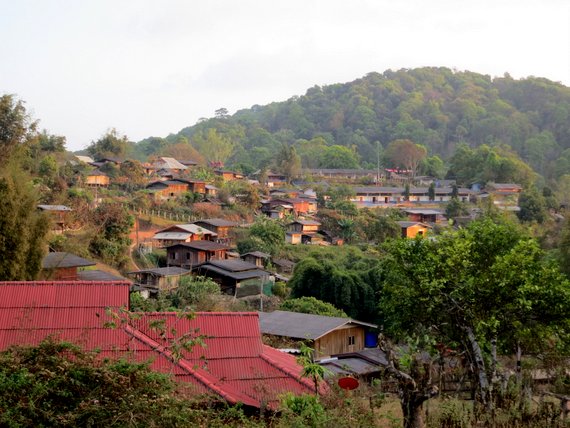 We pulled into his lovely little town in the Mae Hong Son province and judging by the looks on people’s faces, it seemed we were the first tourists they’d ever seen. This would be our home for the next 36 hours as we waited for the tow truck to arrive. 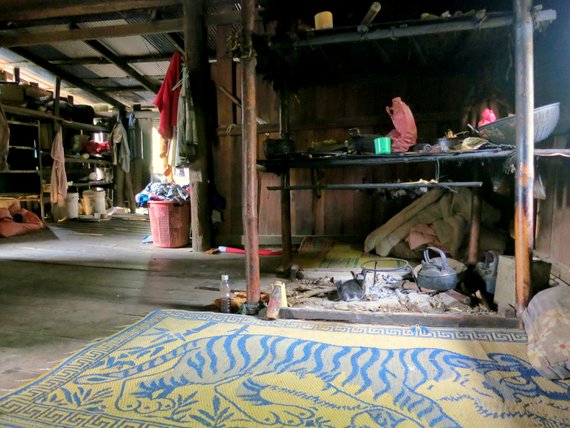 Pepitome’s house was very basic with two rooms, an outhouse, and farm stable, but he made us feel like honored guests in his palace. He set up a bed for us in the living room and made sure we were proper tipsy and well fed. This is the kitchen and open-flame stove (in the middle of a wooden house!), where they cooked four delicious and very authentic Thai meals for us. 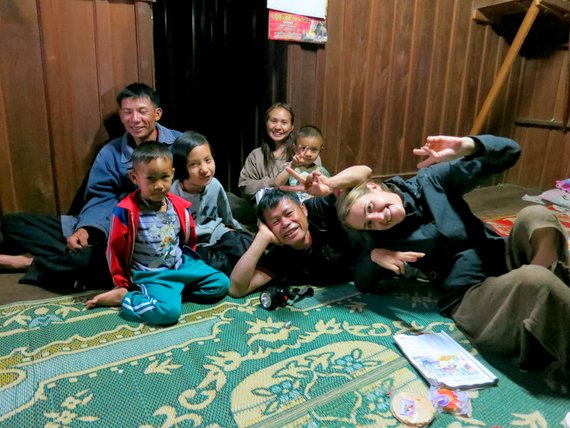 Pepitome was so excited to have us as his guest that he invited a variety of neighbors over throughout the evening to meet us. The conversation was limited to hand gestures, our five words of Thai, and his ten words of English, largely guided by the reoccurring dialogue, “Mike happy?”…”Pepitome happy!”…”Whiskey?…”More Whiskey!” Some of the kids had their English lesson books so that served as an extra communication device but either way smiles and laughter were more than enough. 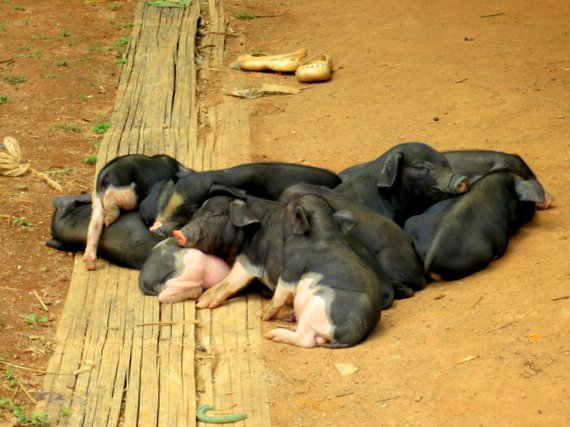 Until the tow truck driver arrived (baffled and perturbed that we got the bike this far into the boonies), we spent the day hanging out with Pepitome and his family on the farm. We fed the pigs, followed chickens, practiced English with the kids, and snuck into town to buy Pepitome some thank-you groceries for his incredible hospitality.

Would you go some place knowing you might be stranded in the middle of nowhere and have to rely on the kindness of strangers for help? After our experience trying to get to Pai, you can put us down as a “Yes.” Pepitome welcomed us into his home with food, shelter, and open arms—without knowing anything about us or asking for a single cent—it’s one of the numerous experiences that demonstrates the extreme kindness we experienced in all corners of the world.

7 thoughts on “The Back Roads & Warm Hearts of Thailand”