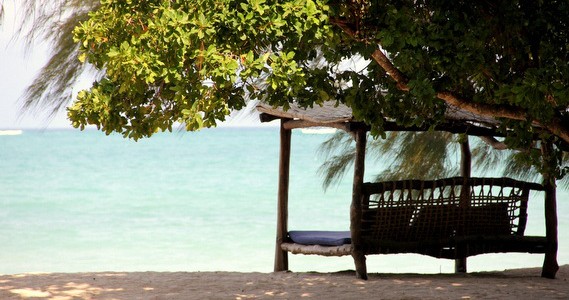 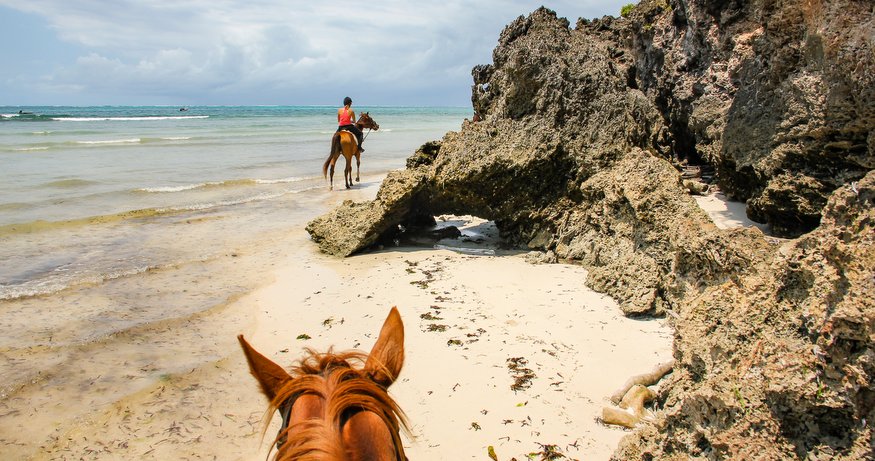 Anytime you check into a fantastic luxury hotel, you think “I could live like this” but at Kinondo Kwetu, we literally wanted to move in. Sitting on the edge of a sacred forest of Diani Beach, Kenya, this former house became a hotel when the rave reviews and support of visiting friends pushed them to open it to the world. Owners Ida and Philip Andersson can now host 38 guests in a variety of suites decorated to perfection, the chicest entertaining spaces, and grounds that stay true to the hotel’s Swahili name “home away from home.” 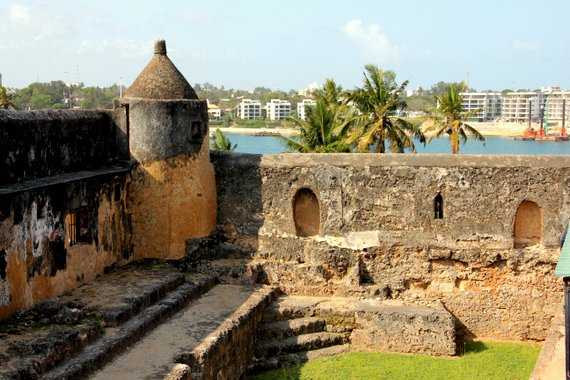 Mombasa is the biggest city near Diani with a long history as a vibrant port town so we made a stopover en route to Kinondo. In the Old Town, Fort Jesus is the main attraction—-despite the Christian name, this 16th century fortification changed hands nine times between the various nations vying for Kenya’s strategic position in global trade. Arab, Portuguese, and British influences flow together in one of the best preserve forts in all of Africa. After a fascinating tour, we strolled the winding streets of Old Town…check out the slide show for some fun shots from around town (Warning: it may prompt you to rent a camel for your next birthday party). 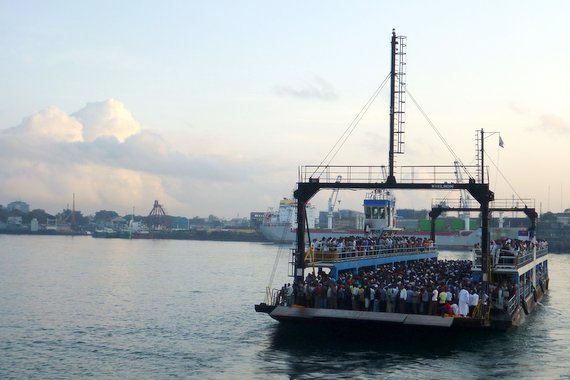 The main way to get back and forth from Mombasa Island and on to the south coast beaches is the ever-packed Liconi Ferry. We squirmed our way on here and then caught our matatu to Diani. If you can contain your claustrophobia, going shoulder to shoulder is the best way to meet the locals. 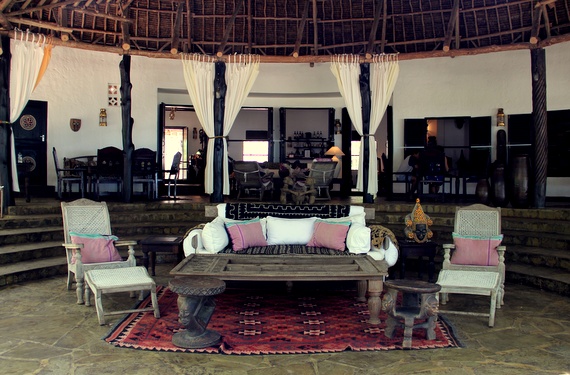 We arrived to Kinondo Kwetu and it was as if we had fallen into a spread from ELLE DECOR. As avid collectors and former fashion execs, the owners’ mix of antiques, fabrics, and accents could take the headline “Boho Chic.” 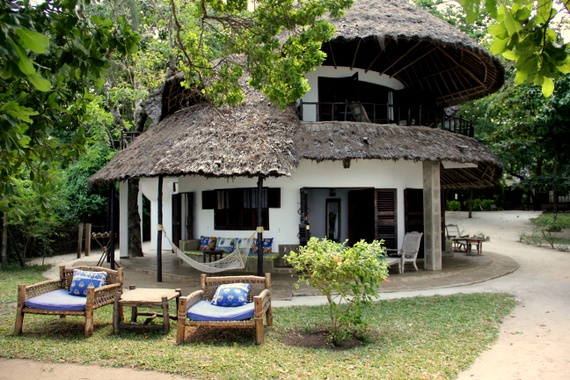 The series of suites and villas are built from coral rock, plaster, and macuti thatch with plenty of breezy windows in between. This double-decker beauty was ours for the three days. Pays to be a honeymooner. 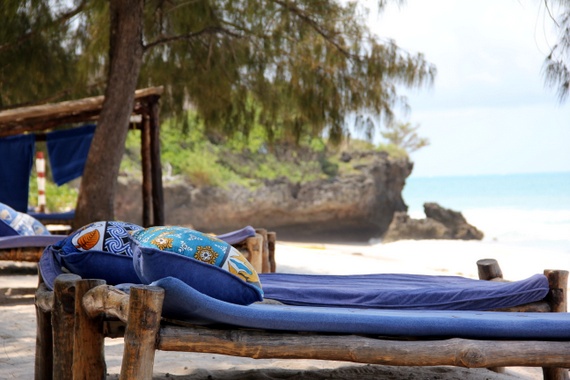 The beach that spans the property, with its driftwood lounge chairs covered in terry cloth cushions and khoi khoi pillows, beckoned us to sit back and soak up the coast. The turquoise tides change dramatically throughout the day but as they recede, members of the local Digo tribe often come out to pay homage to this sacred rock. Paper prayers are left in its crevices and cast out to sea when the spirit moves them. 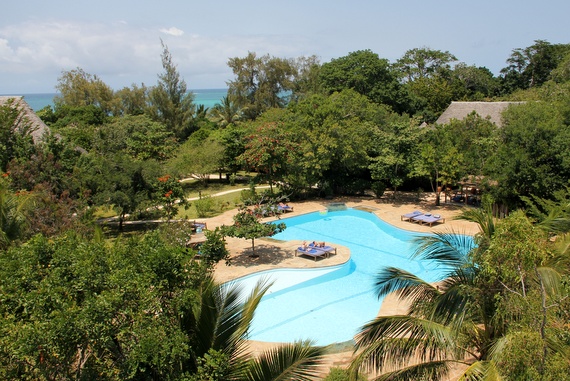 When we weren’t in the ocean, we could could be found relaxing by either of the two pools on the 13-acre property. 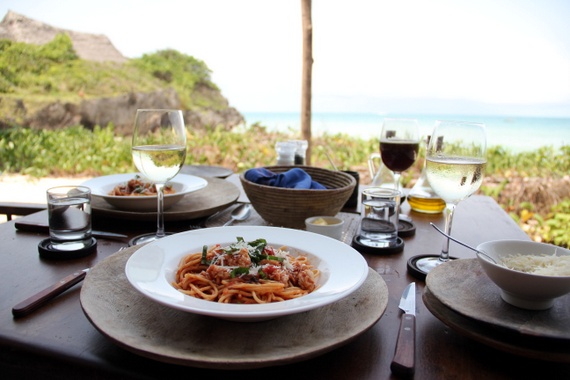 The food here was unbelievable (especially the seafood) with the setting making us savor everything that much more. 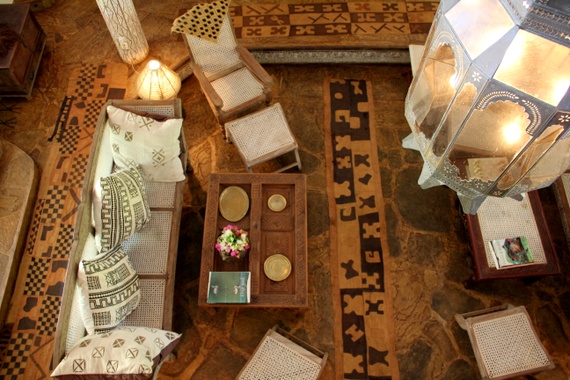 Another thing we adored about Kinondo Kwetu was the familial nature of things. In the evenings, we would meet at the Mama Ta villa as if we were gathering for drinks at a friend’s place. With old chess sets, beautiful coffee table books, and a well-stocked bar it was an easy place to get comfortable. 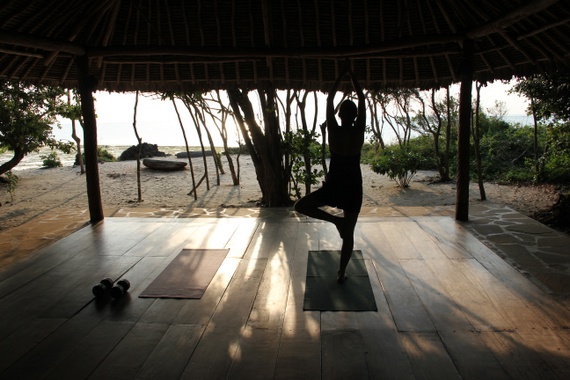 A few mornings a week, John from Africa Yoga Project conducts class in the open-air studio and spa. Proceeds help empower inner-city kids through the teaching of yoga. This is one of the many incredible community projects the hotel supports, in addition to the local Kinondo Primary School and Kinodo Kwetu Clinic. 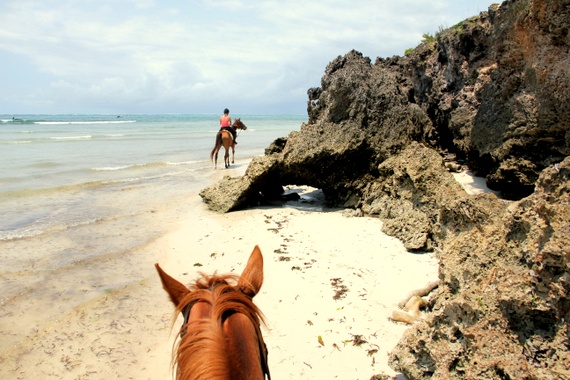 Not ones to sit still for long, we took advantage of the hotel’s volleyball net, paddle boards, snorkels, and the Kinondo stable. We explored the beach by horse watching local ladies gather mollusks, fisherman cast their nets, and kids splash in the waves. 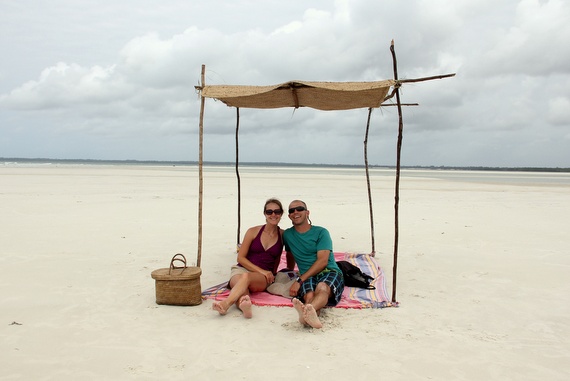 Excursions also head to the natural marine park to swim with dolphins and dive through the coral or down the river to Paradise Lost. We opted for the later which is an sandbar island that emerges at low tide. Only an hour after we finished our picnic in our pop-up pavilion, the island had literally disappeared. 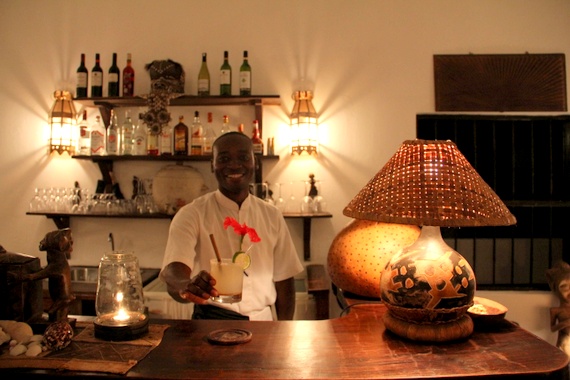 We have loved so many places that we’ve visited on our trip around the world but rarely do we feel the immediate urge to return. We’ll be back some day and if you get the chance before we do, we hope you can have a signature HoneyTrek cocktail (vodka, ginger juice, fresh lemon, and a splash of Sprite) for us.

7 thoughts on “Paradise on the Kenya Coast”