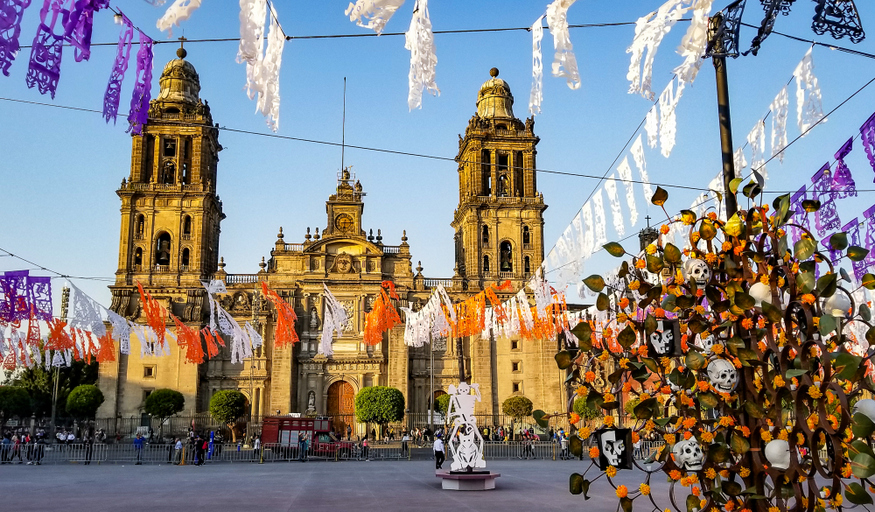 When you eventually pass away, wouldn’t you want your family to remember you with a party each year? You’d be welcomed home with your favorite foods, music, jokes and elaborate personalized decorations. Two days would be dedicated to the good times you shared and keeping the fun rolling. We love this light-hearted look at death, and celebration of life, that manifests around Mexico every November 1st and 2nd. Elements of Día de Muertos date back thousands of years, though when the Spanish conquistadors arrived in the 16th century, indigenous and Christian traditions had to find a way to coexist. To practice under Catholic rule, the Aztecs adopted All Saints and All Souls Days and other trappings of Christianity by adding altars and crosses to their pagan displays. What started as a workaround is now one of the most poetic expressions of culture, to the level of earning UNESCO status. We were thrilled to go back for our third Day of the Dead—this time on assignment for Lonely Planet and Visit Mexico.To find the most incedible Día de Muertos celebrations in Central Mexico, we explored five cities in five days–from marching as skeletons in Mexico City’s world-class parade to adorning altars in indigenious family homes. Find out more about the traditions of Day of the Dead, the must-see events, and what you can expect when you hopefully go to Mexico for this otherworldly celebration.

Day of the Dead Crash Course

In fall 2014 we housesat in Mazatlán, a gorgeous colonial city on the Pacific coast of Mexico, excited that our stay overlapped with Día de Muertos…but not fully sure what that would entail. Bakeries started to fill with pan de muerto, colorful papel picado was strung across the streets, and the icon of Catrina—the grand dame skeleton of Día de Muertos—seemed to preside over town. We dipped into a store selling costumes and the Dracula and Sponge Bob outfits we’d come to expect in late October, were replaced with reams of black lace, red roses, and skeleton suits. As we learned, stripping down to the bone reminds us that death is the great equalizer. No matter how high society you are there is no escaping your maker, and just to remind politicians and socialites of this fact, newspapers were running literary “calaveras,” sarcastic epitaphs with a boney caricature about the mayor’s counsel. The more we chatted with Mazatlecos, the more we realized Día de Muertos was a reminder to not take ourselves to seriously and that even when we die, the party’s not over.

This is one of the most festive holidays in Mexico, so when we asked our neighbor Julia for costume advice, she brought down a box of face paint, boas, wigs, ponchos, and a massive black hat adorned with feathers and flowers. Wearing a rose in my hair was not going to cut it. She got her whole body professionally spraypainted into a skeleton and we fumbled our way through YouTube tutorials to turn ourselves into sugar skulls for the parade.
TIP: Mazatlán is one of the many cities around the country to host a multi-dimensional procession. In addition to the central Mexican cities below, Oaxaca, Guanajuato, Merida, and Lake Pátzcuaro are also excellent Día de Muertos destinations.

Sunset fell on November 1st and we took to the streets, alongside thousands of Catrinas and floats with artistic displays honoring the great citizens of Mazatlán. We made stops at grand altars around town—everywhere from government buildings to historic homes—to pay our respects with candy, coins, and prayers. Unlike most cities, Mazatlán’s favorite parader is a donkey hauling kegs of free beer. Catch him if you can.

More than a fabulous parade, Day of the Dead is a familial holiday. At the core of the tradition is building an ofrenda (altar display) to honor and welcome home their family members who have passed. Ofrendas are deeply symbolic; aromatic marigolds and candlelight are used to guide the way from the heavens; salt is placed to purify their soul and water quenches their thirst, while sweets, alcohol, and nostalgic decorations encourage the dead to stay for a while. Living in Mazatlán for six weeks, we were lucky to have friends invite us into their homes to partake in the more intimate celebrations, gathering around the table for tamales, laughter, and a stroll down memory lane.
TIP: Try to plan a homestay either on Airbnb, Couchsurfing, or Homestay.com to increase your odds of a similarly intimate experience.
See our video photo gallery from the Mazatlán Día de Muertos.

We woke up at 10am the next morning washed off the rest of our skeleton skin, and made our way to the cemetery for All Souls Day: part two of Día de Muertos. The cemetery was a sea of marigolds, candles, and families. You’d think a cemetery would be a somber place, but each headstone was having their own party. To lead the spirits back to their place of rest, families gathered around decorated graves for picnics, with an extra serving for the deceased. Banda musicians went from plot to plot taking requests for the dead’s favorite song. We did see more personal moments of prayer and even a few tears, but when everyone shares a day to “mourn,” no one feels alone.

After our experience in Mazatlán, we knew we’d be back to Mexico for Día de Muertos. With deep indigenous roots, each region has their own interpretations of the holiday. On Pátzcuaro Lake, there is a procession of candlelit boats, where fishermen twirl their butterfly nets to lure spirits to the grand fiesta. In Tuxtepec, locals create elaborate rug designs from sawdust along the streets. So for the 2017 Día de Muertos, we flew to Central Mexico and explored five cities to see how the festivities manifested from place to place.

Our latest Día de Muertos journey began in Mexico City, a capital rich with history and culture. Though curiously Day of the Dead was never on CDMX’s list of festivals–until 2016. When the James Bond Spectre movie released worldwide, with an opening scene of a Día de Muertos parade through the Centro Historico, it had everyone clamoring to come the Ciudad de Mexico for the festival…that didn’t exist. A country of ingenuity, Mexico saw this as an invitation to turn fantasy into reality, with a parade that more accurately showcased the meaning of Day of the Dead, while having a fiesta to one-up the film. The parade was such a success, it’s here to stay. The theme for 2017 was La Muerte Viva and Carnaval de Calaveras with over 1,000 performers, a dozen floats, and fantastical displays marching seven kilometers from the Estrela de Luz, up Avenida Reforma to the grand Zocolo plaza. Using our Lonely Planet credentials, we got to go backstage with the performers then marched in the parade, skeletal makeup and all. Watch fire-breathing diablos, Aztec marching bands, and hundreds of twirling Catrinas as we go behind the scenes of the ultimate celebration of life and death.

Sunday morning we made our way south to Puebla & Cholula. We chose these neighboring cities, with UNESCO written all over them, because they speak to the religious mashup of Día de Muertos. Puebla is classically colonial and very Catholic, while its neighbor Cholula was a pagan religious center dating back to 1 AD and still has a thriving indigenous population. Together they comprise a vibrant cultural scene with tons of events around Día de Muertos, including a 50-skull exhibition, pre-Hispanic carpet weaving contest, Catrina fashion show, and ofrendas all over the town. See our Facebook Gallery and our Instagram Stories Highlights from these two cities.

House to House in Huaquechula


An hour southwest of Puebla, the indigenous village of Huaquechula is renowned for their massive pyramidal altars. Not on display in a cultural center, they are only in homes of those who’ve had a family member pass away in that calendar year. You’d think on such a sullen occasion, you wouldn’t want house guests (much less strangers) dropping by, but it’s encouraged. On November 1st, paths made of marigold petals are sprinkled on the street so visitors and the honored dead can find their way to the celebration. We went into one home with a three-story alter for a 10-month old boy. Just when I felt my eyes welling up, the mother came to offer me a hibiscus juice and asked us to stay for mole. While we adored the rollicking parade and dazzling artwork across central Mexico, this was perhaps our most memorable moments of Día de Muertos.


Up all Night in San Andrés Mixquic

To choose where to go on the night of November 1st—the pinnacle of the Dia de Muertos celebration–is an incredibly tough choice when there are thousands of festivities going around Mexico. How did we choose? A recommendation from a cab driver (always ask the locals) led us to San Andrés Mixquic on the very edge of Mexico City. This 11th-century town has held onto its pagan traditions and holds Día de Muertos as its most important time of year. They start their festivities when the church bell strikes midnight on October 31, signaling the arrival of the souls of departed children. On the morning of the 1st, while other cities are waiting for the parade at night, they lay out breakfast on the ofrendas. By nightfall, the spirits swap places and the adult festivities begin. We walked into the cemetery just as the families were finishing up their decorating and getting ready for a night of fun. The street festival spanned blocks with Catrina and Aztec art displays running down the center, houses decorated with signs welcoming their dead like “Bienvenida Maria Elena!”), tons of food vendors, and an ulama court. This Mesoamerican game played with an 8lb rubber ball and struck with the hip, is one of oldest continuously played sports in the world so to see it played in full costume with religious pageantry was unreal! We pushed our fun until 3 am (long but interesting story, here). 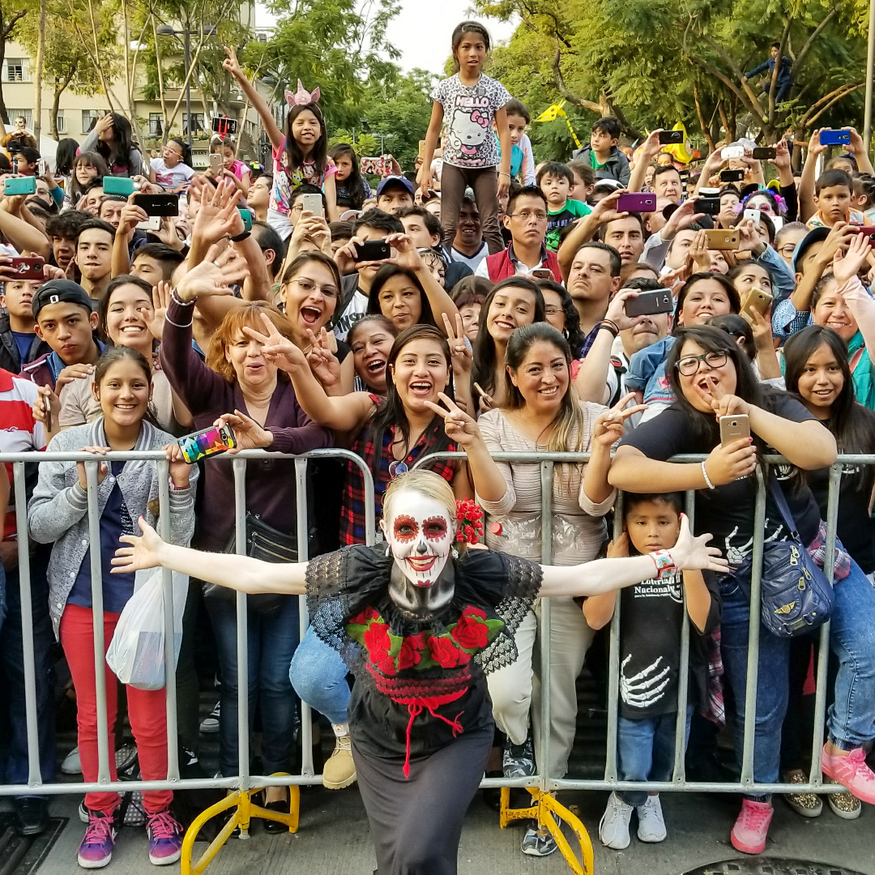 There were so many amazing moments captured on social media that we had to build a special HoneyTrek page to share it all at glance. Can’t wait to go back and celebrate our fourth Dia de Muertos in Mexico!

22 thoughts on “Celebrating Day of the Dead in Mexico”