I’ve always wanted to explore a country by bicycle. We’ve met so many long-distance bikers over the years, all praising it as the purest means of travel. Not just for its zero emissions, but the lack of barriers between you, nature, and the locals. As a mode of transportation, biking keeps you moving at a decent pace but goes slow enough to take in the scenery. Meeting our friend Jamie who tandem bicycled the world (with an open seat for random passengers) or the “Guitar Biking” couple who busked from Belgium to Vietnam, I was wooed by the romance of it all. But there was one problem, I don’t really bike. I mean, the one time I biked over 40 miles my leg seized up on the Verazzano Bridge and the next week I walked like a washed-up cowboy, and since then my riding has been limited to beach cruisers. I was not qualified for a multi-province journey, but EverTrek’s e-bike tour up the Kattegattleden gave me a newfound confidence. Sweden’s first national bicycle route is a flat, 395 kilometer paved path running along the southeast coast’s charming beach towns, medieval cities, wine country, and finishes in Gothenburg…home of the 2019 Adventure Travel World Summit, the conference which brought us to Sweden. The Kattegattleden terrain is perfect for a newbie, plus EverTrek maps out the best stops, restaurants, hotels, and offers luggage transfer to keep it fail-proof. Plus, a pedal-assist bike would give me extra time to detour down charming alleyways and stop to take photos, without falling a mile behind the group. No more excuses, it’s time to go on my first multi-day ride! 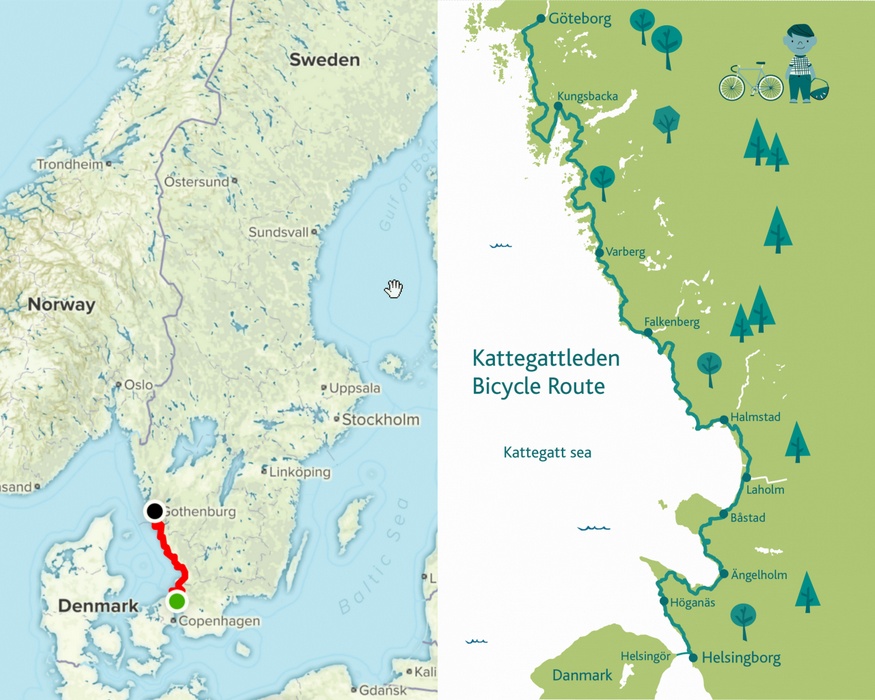 At nearly 400 km, the complete Kattegattleden trail is best spread over 7-10 days. If you’re short on time, there is also a train that runs the length of the route so you can still hit the highlights. Our group had three days to make it from Helsingborg to Gothenburg so EverTrek organized this best-of route:
Day 1: Helsingborg – Arild – Halmstad (40 km cycling)
Day 2: Halmstad – Falkenberg – Varberg (57 km cycling)
Day 3: Varberg – Kungsbacka – Gothenburg: 62 km cycling)
For complete route information check out Kattegattleden.se 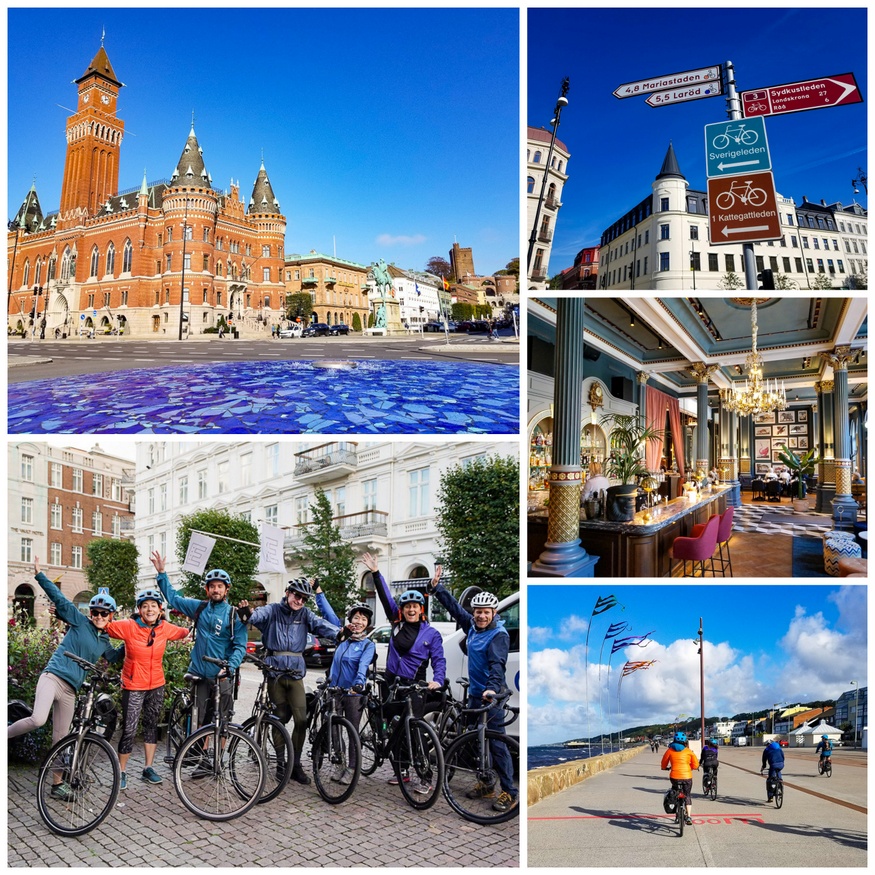 Our journey began in one of Sweden’s oldest and most culturally unique cities. Founded by the Danes in 1085 CE and under their control until 1658, Helsingborg has deep Danish roots and maintains friendly relations with its mother-nation 4 km across the sound. Their medieval fortress towers over the city and stone churches and wonky wooden buildings line the charming narrow streets. To immerse us in the history, EverTrek had our group stay at the Elite Hotel Mollberg—the oldest hotel in the country. At their stunning bar with hand-painted columns, crystal chandeliers, and dashes of gold along the molding, we had our first team meeting. The founder of EverTrek, Gunnar Nyström, ordered a round of champagne to welcome our intrepid group of seven, hailing from the Philippines, Peru, China, Mexico, and the States. Gunnar has over twenty years in the travel industry, leading biking and hiking trips in a dozen European countries, and currently lives in Gothenburg…the final destination on our Kattegattleden bike trip. 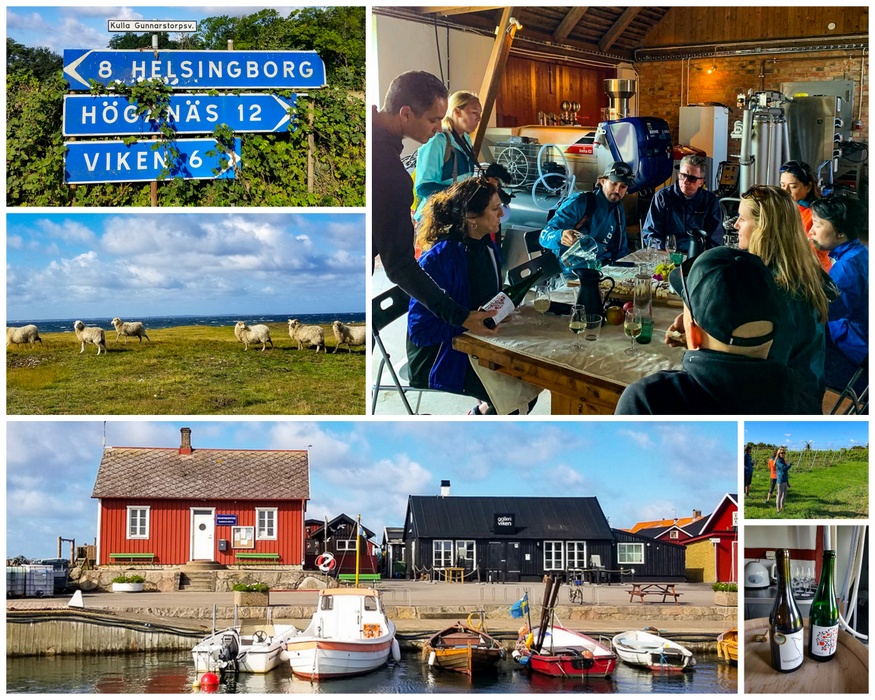 Hopping on the Kattegattleden bike trail right from downtown Helsingborg, we cruised along the Öresund sound and its lively boardwalk, sandy trails lined with blackberry bushes, and ocean-front sheep pastures. We stopped for a snack at the postcard-perfect town of Viken with bobbing rowboats and colorful seaside cabins, then carried on to Kullabergs Vineyard. The vintner Felix admitted Sweden’s wine-making industry is in its wild-west stage, but he’s proud to say their award-winning wines are giving the Skåne region some street-cred. Solaris grapes thrive in the cool sea air, as do plums which make for fantastic schnapps. Sampling a variety of wine and spirits led to my favorite part of the experience, a lesson in Swedish drinking songs.

The Art of Fika 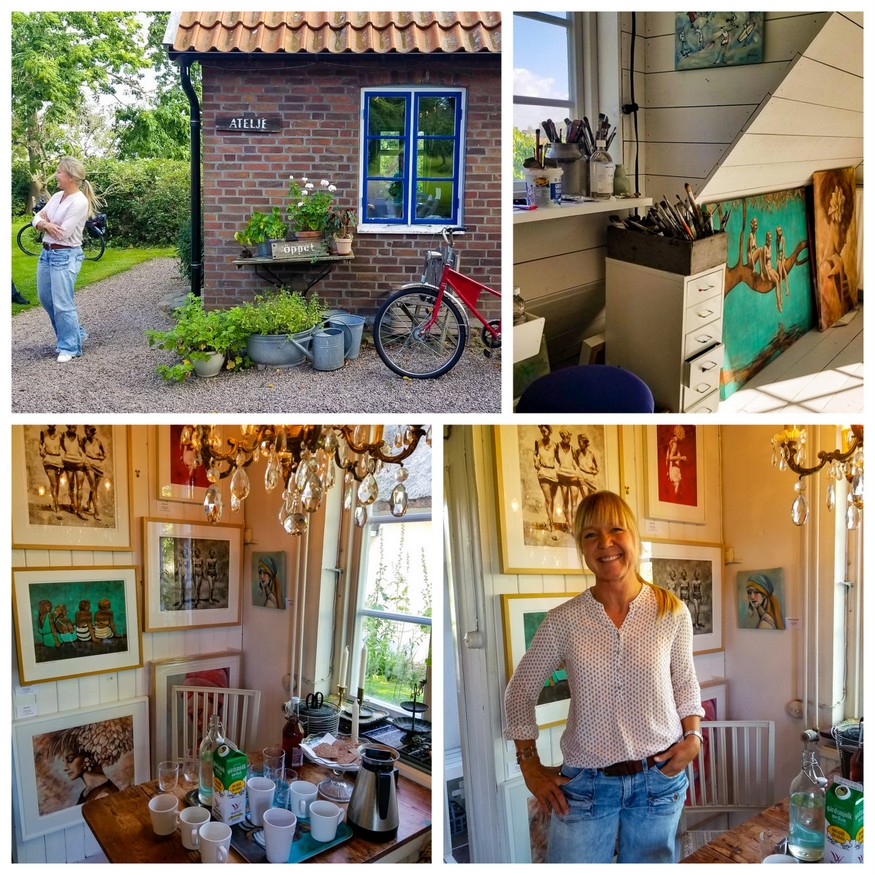 After our wine tasting, Gunnar was wise to assume we needed a “fika,” the daily Swedish ritual of having coffee and cake with friends. Pedaling beyond the grapevines and into the pastoral community of Arlid, we reached the artist studio and home of Helena Staffas. With twinkling blue eyes framed by blonde bangs, she welcomed us into her airy space for fika at her kitchen table, surrounded by her sea-inspired art. After university, she worked as an au pair in Los Angeles and became obsessed with beach culture. Scenes of surfers and bathers dominated her clapboard walls because to her they represent freedom. Our group gravitated to her lacquered trays, while I had my eye on the bunting…the symbol of glamping. She had taken an experimental oil painting, cut it up into triangles and strung them over her kitchen sink. I asked if she had any for sale and she gave it to me with a smile. 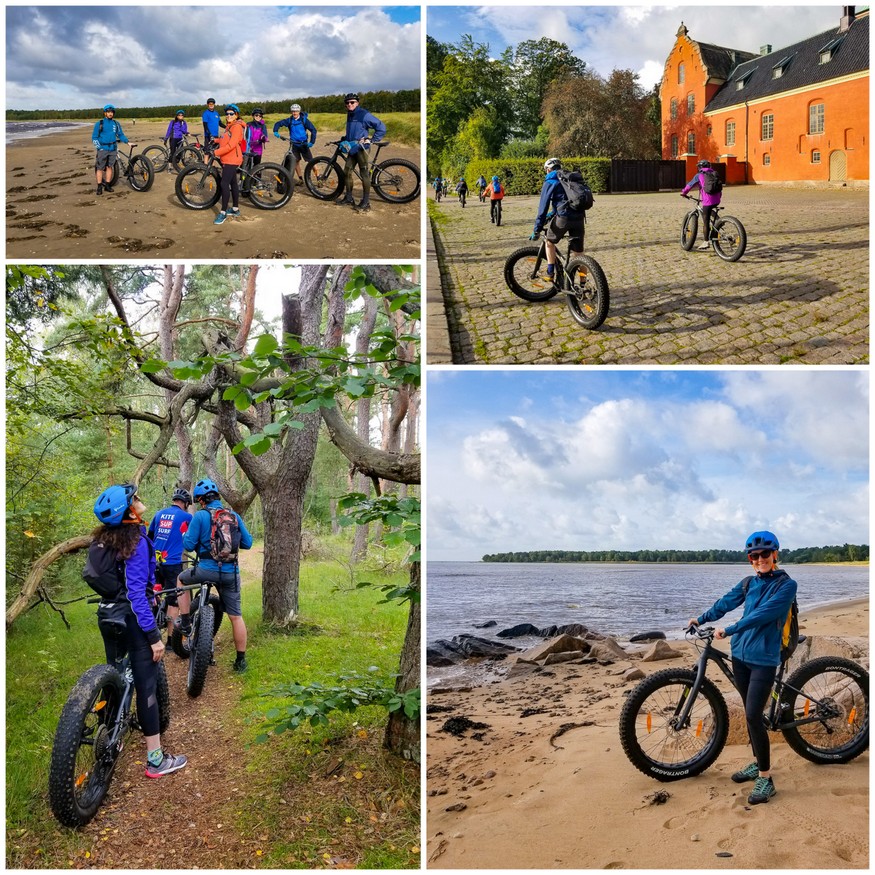 We entered the province of Halland and into the “Summer City” of Halmstad. Tuckered out from a full a day in the saddle, we checked into the Grand Hotel, grabbed a bite at the yummy Hummer Grill & Bar, then rested up for a morning of fat biking. EverTrek partners with local outfitter KiteKalle for people who want to check out the region’s more rugged terrain. Starting at the 400-year-old Halmstad Castle, we hopped on the Prins Bertil Trail. The city vanished and we were in the thick of the forest. The trees gave way to the beach and the next thing you know we’re fat biking over sand dunes and splashing through shallow surf. Loved the mix of terrain on this 18-kilometer trail and would have kept going but we had a date with a celebrity! 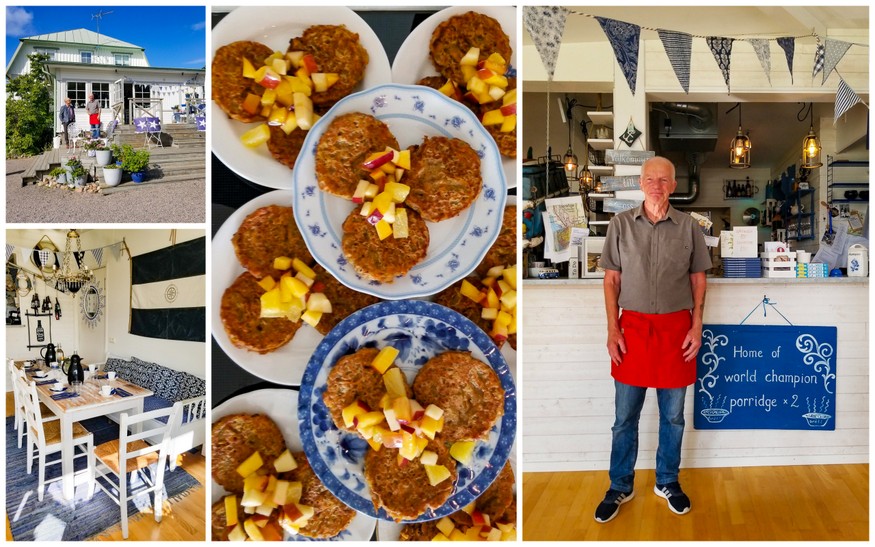 Steninge is home to the two-time winner of the World Porridge Making Champion, Per Carlsson. I’ll admit I didn’t know this fierce oatmeal competition existed but I was star-struck to meet its gold medalist. Per is a soft-spoken, slender man in his late 70s, but when you see his new tattoo with “Porridge World Champion” and crossed kitchen utensils inked on his forearm, you know he’s a badass. For our visit to his B&B, Steninge Coastal Station, he prepared a carrot-cardamon porridge pancake drizzled with chocolate and it did not disappoint. As Per says, “Great porridge needs three key things; love, patience, and great ingredients.” I would highly recommend an overnight stay at their charming seaside inn; it comes with a daily porridge bar and a sprinkle of stardust.

The Way to Falkenberg 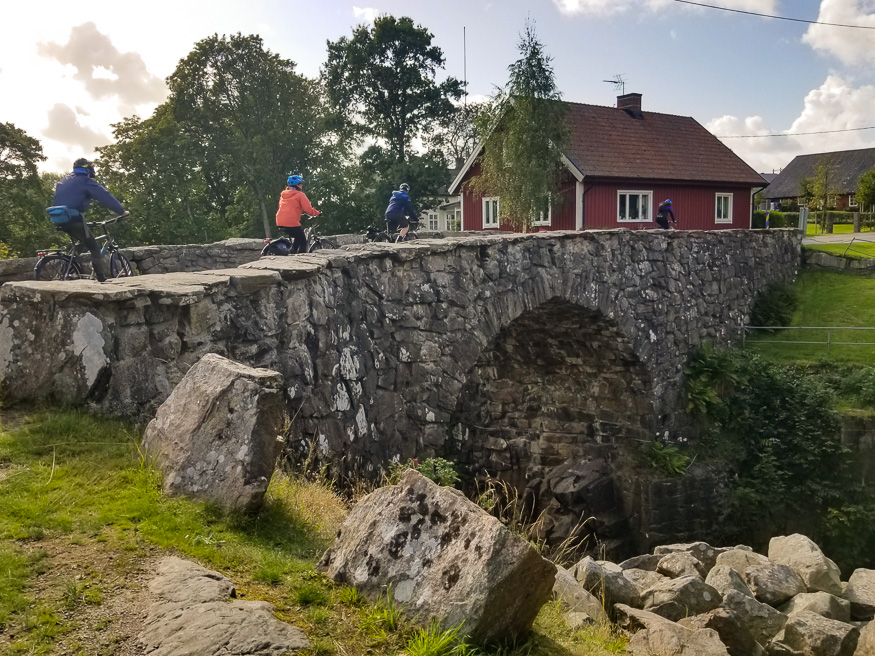 North of Steninge Beach, the landscape changes from barren and rocky into a verdant agricultural setting. After biking back in time over stone bridges and around farm-house studded pastures, the 21st-century returned with Falkenberg’s modern Skrea Strand. New colorful cottages and the swanky Falkenberg Strandbad Hotel lined the beach, as did golden sand dunes. 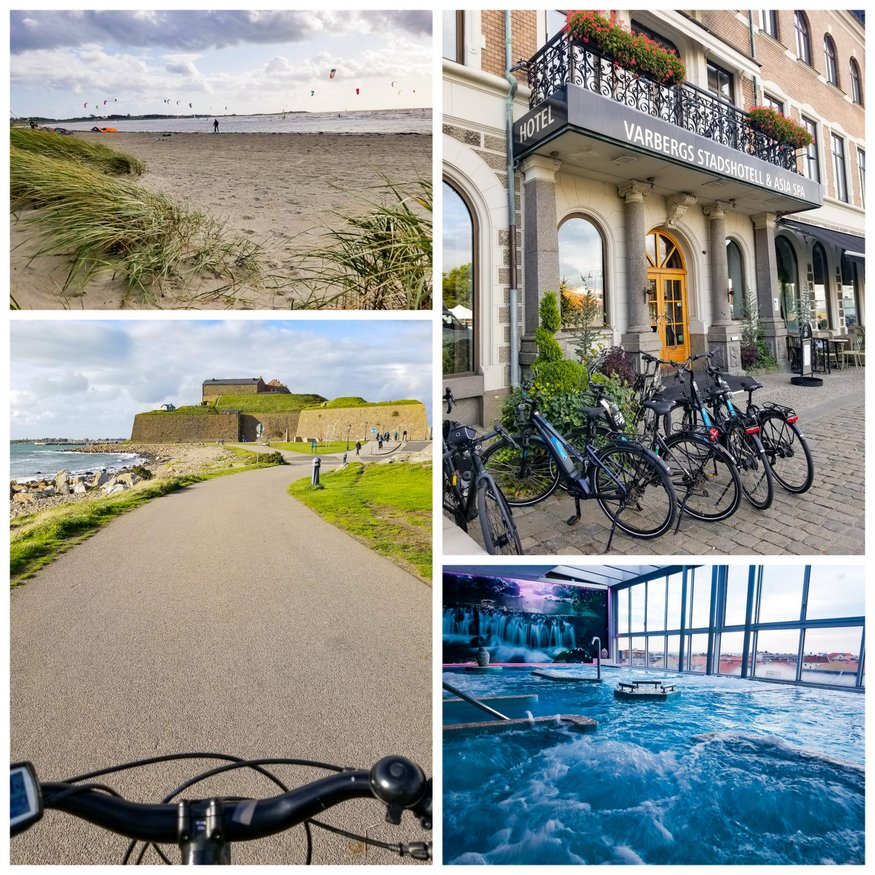 Perhaps my favorite stretch of the whole ride was Apelviken to Varberg. The sky was filled with kitesurfing sails and Swedes doing flips over “Apple Bay,” a mecca for Nordic kiters. The next 4 kilometers were lined with dramatic cliffs and beach coves, leading towards the 11th-century Varberg Fortress. Hanging a right at the stone fortification, we reached the center of town and our hotel, Varbergs Stadshotell & Asia Spa. I had my doubts, having not seen an Asian person since my arrival to Sweden, but man…that spa was legit with saunas, steam rooms, ice baths, multi-station whirlpools, and views over town. Speaking of town, this was the night we tore it up, hitting three bars (Grappa was our favorite) and dancing like merry fools. 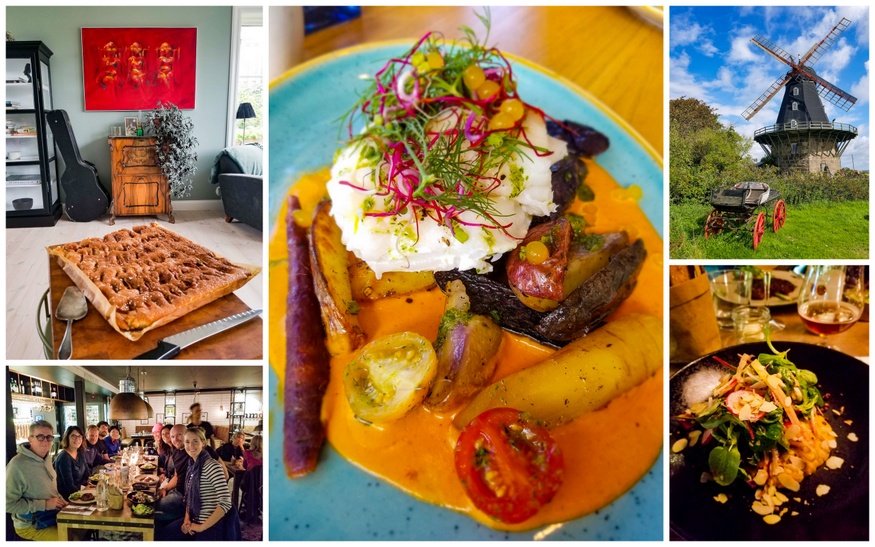 On the final day, the headwinds were brutal so we shortened our ride and stopped for an early lunch. It should be noted that meals on this trip were not the brown-bag variety. In fact, each lunch and dinner was a sit-down, and often gourmet, affair. From the contemporary Bara Vara in Helsingborg, the cozy Strand Hotel in Arlid, to the unique Särdal Kvarn cafe in a 19th-century wind mill, the food was top notch with a lovely setting to match. While pickled herring and lingonberries might be what Swedes are known for, I would say farm-to-table simplicity is what makes them stand out. After lunch in the sleek Långedrags Värdshus coast guard station, Gunnar announced that dessert would be served by the home of the “Apple Pie World Champion.” We pulled up to a house with a small apple orchard in the yard, and his wife Cristina swung open the door. Even though the claims of her champion status was just a joke and compliment, the gesture of welcoming us to their home made it five-star. 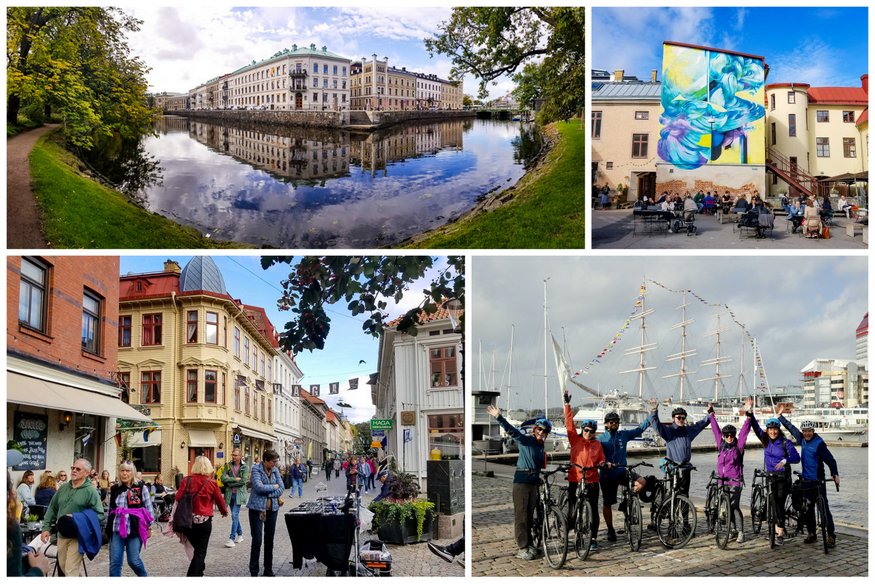 Bellies fueled up, we pedaled our last stretch to Gothenburg. Sweden’s largest port city was founded as a trading colony, where the Dutch, Scottish, and Germans each left their mark on the architecture. Stone neoclassical houses lined the canals while modern buildings like the Volvo Headquarters and multiple universities give the city a sparkle. We followed the water, past tall ships and cargo carriers, and made it to the doors of the Adventure Travel World Summit. Three days and 159 kilometers later on the Kattegattleden trail, I found my love for long-distance cycling.