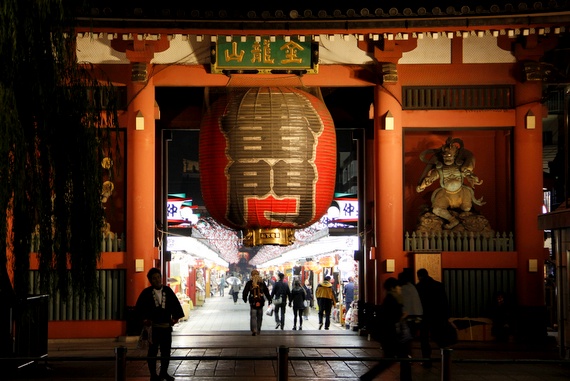 Tokyo is as lovely and well mannered as you’d expect the Japanese capital to be, but it has a nerdy, naughty, and edgy side that keeps it interesting. Things like capsule beds, anime emporiums, Pachinko parlors, and Hello-Kitty-themed Love Hotels thrive alongside ancient shrines and state-of-the-art skyscrapers. It’s a place of endless contradictions and it kept us on our toes.

The city has a modern facade but right behind these skyscrapers, the Tokyo Skytree tower and the Asahi building (with a roof made to resemble a frothy pint of beer), is one of best preserved neighborhoods in Tokyo: Asakusa. We based camp in this fantastic neighborhood with a stay at the surprisingly affordable Asakusa Smile. (Private room, kitchen, WiFi, laundry, and two free beers at check-in for $26/couple). 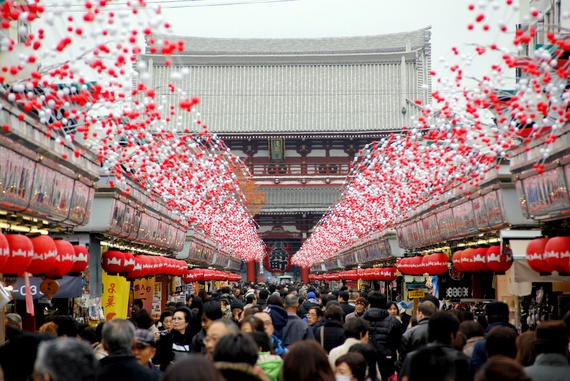 Digging into historic Asakusa, we made our way toward Tokyo’s oldest temple, Sensō-ji. Leading up to the temple there is this little shopping street called Nakamise-dori that has been here for centuries selling everything from wood-cut prints to hot sake to kimonos. 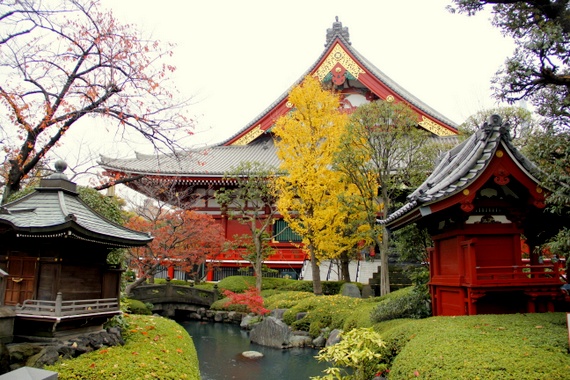 After purchasing a few gifts, we zig-zagged our way into the beautiful Sensō-ji. While the front is packed with tourists jockeying for the perfect photo or lighting incense to honor their ancestors, there are hidden paths to smaller shrines and quiet gardens around the back.

Aimlessly wandering after our temple visit, we stumbled across this funky Japanese diner. Judging by the walls plastered with autographed kabuki headshots and theater posters, this must be the place where every kabuki actor over the last century has slurped down a bowl of udon. What a find! 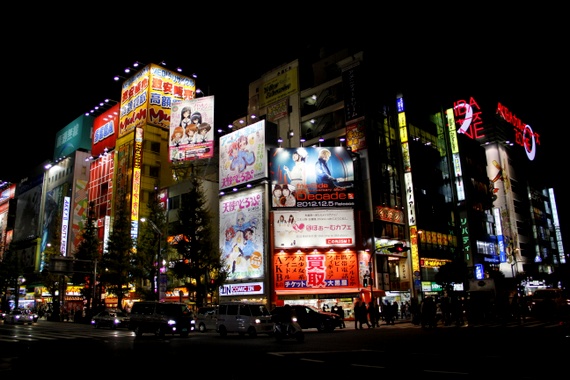 A visit to Tokyo would not be complete without a few hours perusing the anime comic book emporiums, Pachinko parlors, and karaoke clubs of Akihabara. Big cities can seem alike but there is no place like the nerdy kingdom of Akihabara.

The following day we met up with Kota, my Japanese friend from Carnegie Mellon, whom I hadn’t seen since we graduated in 1999. We started the day at the fascinating Tokyo National Museum (check the slideshow for my favorite piece in the whole museum:the wood carving of the warrior in a wall of flames), then meandered through the Ueno Park down to Tsukiji for some yummy street food. 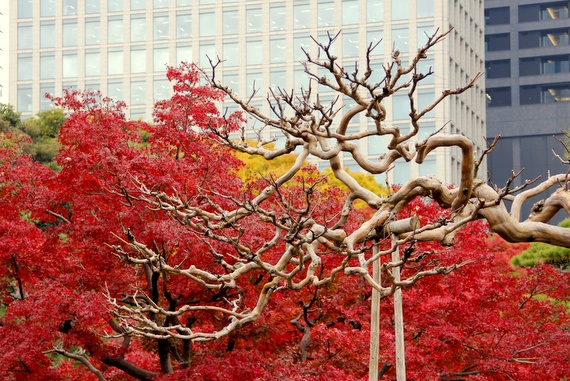 After lunch we strolled through the 17th-century Hamarikyu Gardens, which was the villa and sport grounds of the Shogun Tokugawa. The fall foliage was in full bloom, and in true Japanese fashion the landscapers demonstrated equal part artist, architect, and engineer. 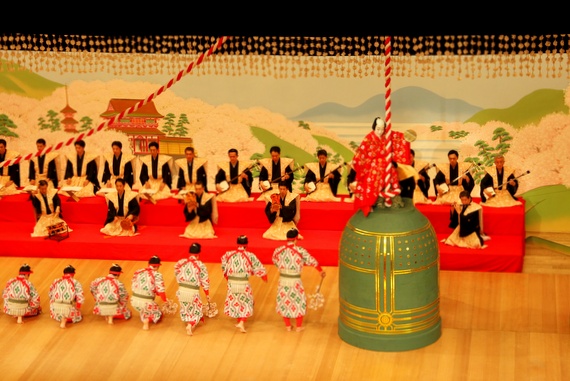 To round out our month of Japanese cultural immersion we went to see Kabuki at the famous Shinbashi Enbujō theater. Kabuki is beautiful to watch but incredibly hard to understand. Aside from it being performed in Japanese, there is so much symbolism in every costume, gesture, and backdrop that even our fluent friend Kota got an audio guide for the show. But once we plugged in, this four-hour feast for the eyes unfolded in the most fascinating way.

As some of your know, we didn’t ask for many physical gifts for our wedding, but rather experiences around the world. A pub crawl in Tokyo’s raucous neighborhood of Ropongi was actually on our wish list and thanks to Ryan, Chelsea, and Magic Pete we had one wild night on the town. Our first stop was this awesome dive, Mistral Bleu Train Bar with blue Christmas lights, currency wallpaper and classic rock on the jukebox. This was followed by three more stops, including an an expat discotec and this ten-seater bar where we bonded with the locals in a lively match of rock paper scissors. 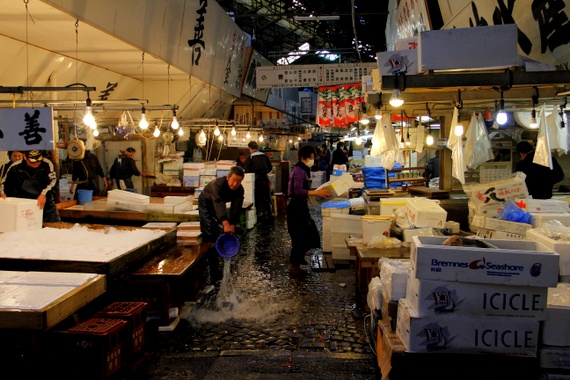 It was a bit harder than usual to wake up the next morning, but we motivated to see the start of the day at Tsukiji, the largest fish market in the world. Tiny fork lifts were whizzing around, fish were flopping about and the fishmongers made for the best people watching. Now this is about the farthest place from a food court but we figured, “If sushi is just fresh raw fish, why couldn’t we just buy a hunk and eat it right here?” With a dash of soy sauce from the vendor’s personal stash, we had sashimi sliced directly off a 300 lb yellow fin tuna. 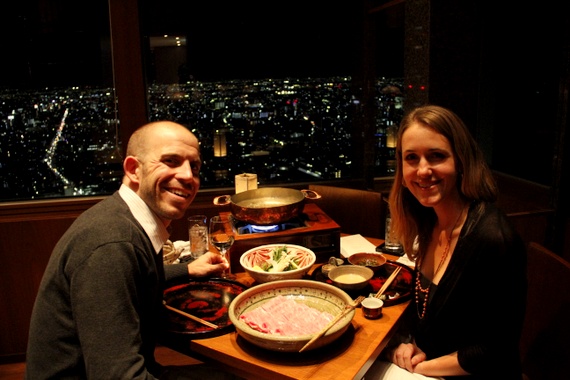 Ever since we saw Lost in Translation we wanted to sip a neat glass of whisky at the New York Bar atop the Park Hyatt Tokyo. Never in our wildest dreams did we expect we would find ourselves staying in a Park Hyatt suite, sharing cocktails with the GM on the 52nd floor, then be whisked away to a honeymoon feast. At the incredible Kozue restaurant, we had a traditional eight-course meal, including shabu shabu and the potentially killer blowfish. We lived through the blowfish but thought we had died and gone to heaven.

The view from our hotel room with Mt. Fuji perfectly silhouetted by the sunset was beyond magical. We couldn’t imagine a better way to say goodbye to such a beautiful country, and while we barely scratched the surface it was one epic month in The Land of the Rising Sun.

16 thoughts on “The Many Faces of Tokyo”