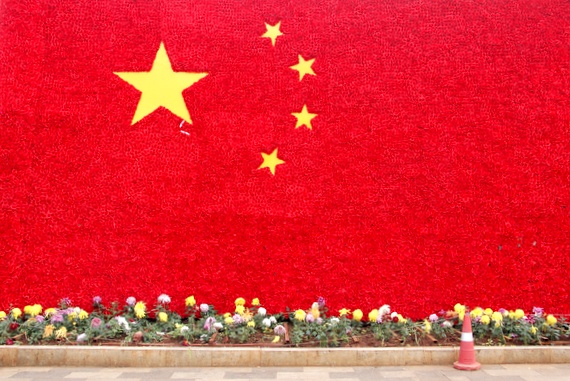 We thought our entry into China via Hong Kong would semi prepare us for this massive and mysterious nation, but really, nothing can. We took a boat from the formerly British HK over to the mainland and it was like entering a new and very foreign country—goodbye English language, Roman alphabet, capitalism, and western ways of thinking and ni hao China! First up on our four-week journey through the 3.7 million square-mile country was the far southwestern province of Yunnan. Bordering Burma, Laos, Vietnam, and Tibet with the Silk Road to India running through it, Yunnan is made of 25 different ethnic minorities with an equally diverse landscape to match. 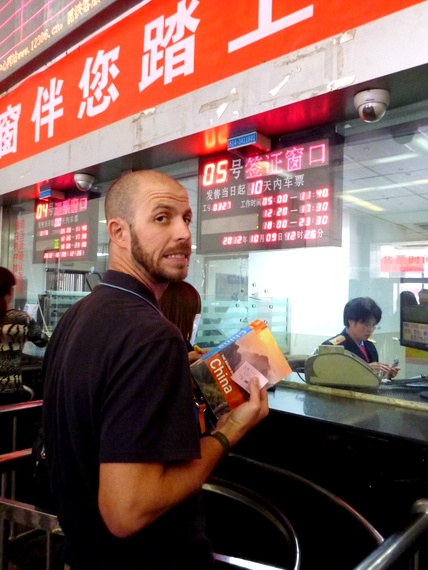 Flying three hours from Shenzen, China (the secret airport to get cheap flights out of the Hong Kong area), we arrived at the Yunnan capital of Kunming and went to the information booth to ask for directions into town. The entire “help desk” of attendants at the international airport did not speak a single word of English and had no idea what we were talking about…it was at this moment (moment #1), we realized China was going to need a new level of HoneyTrek resourcefulness. With a bit of wandering, hand-gestures, and a prayer we finally found the bus station and got two tickets to Kunming. 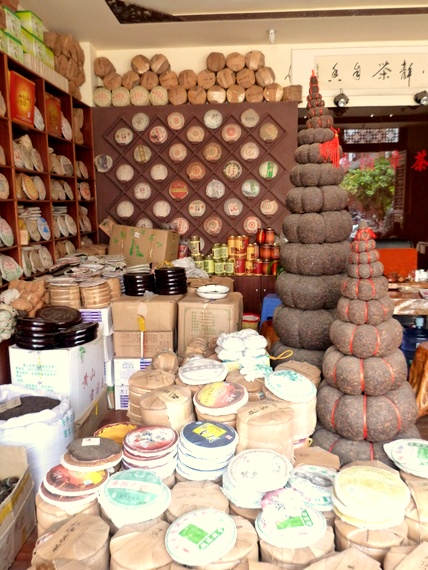 We only had one day in Kunming before catching our train further up the Silk Road into the depths of Yunnan so we spent the day exploring as much as we could. For a city dating back to 279 BC, it’s quiet modern with with cute tea shops like this, chic boutiques, grand monuments, and lovely parks. 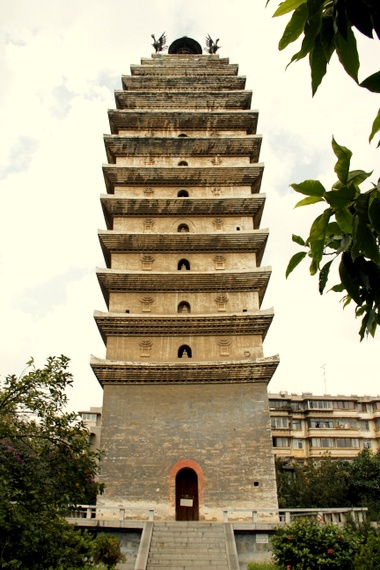 If the U.S.A. had any monument from the 9th-century it would be a huge deal but in Kunming, and honestly most cities in China, it’s just another relic blending into the urban landscape. We found Kunming’s East Pagoda tucked off a major boulevard in a quiet park without an entrance fee or any tourists to be found. 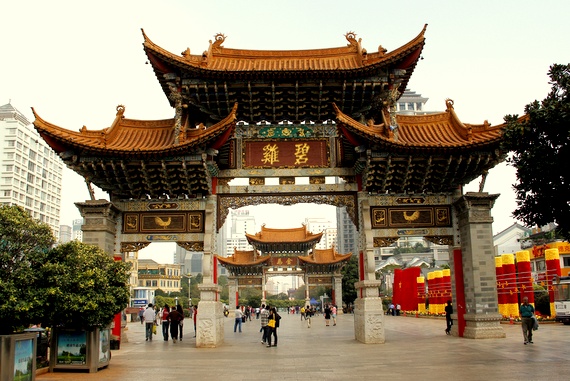 The Kunming Gate with its curved eaves swooping up to the sky and golden characters etched across its lintel was just the kind of classic Chinese architecture we’d been dreaming about. 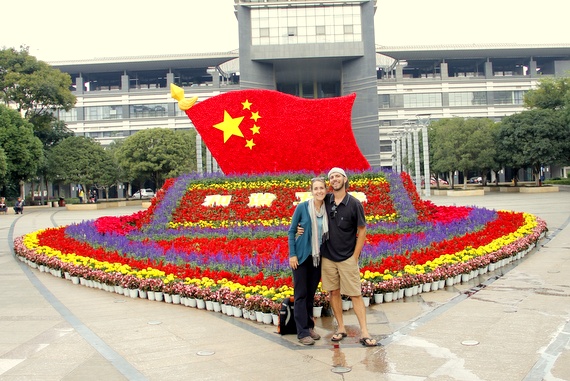 The displays of patriotism are anything but subtle in China—especially during Golden Week. We arrived to Kunming just after the national holiday so the Chinese decorations, landscaping and flags were in full effect. 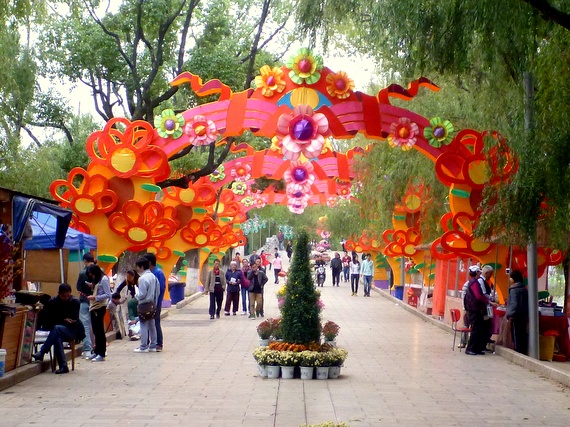 Green Lake Park was by far our favorite part of Kunming for not just its beauty but its energy. For Golden Week and a few upcoming festivals, the Qing Dynasty-era park was decorated to the nines with floral archways and inflatable floating sculptures (think birthday bouncy house but way cooler and without toddlers), while its patrons were performing music, practicing tai chi, and playing mahjong in the gardens and pavilions. With a places like this, Kunming tempted us to stay another day. 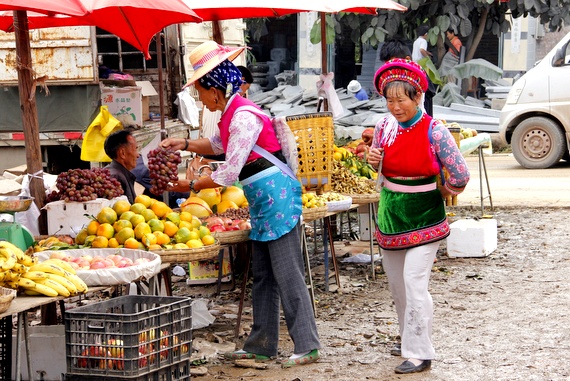 After an overnight train from Kunming, we arrived to the small city of Dali and set out to explore the surrounding villages along Er Hai lake. A mobile market travels to a new town every few days and we caught it at the northeast edge of the lake. The indigenous Bai people come here to sell their wares and shop for anything from apples to fabrics. We came for the people watching—we couldn’t get over their beautiful traditional clothing and wicker basket backpacks! 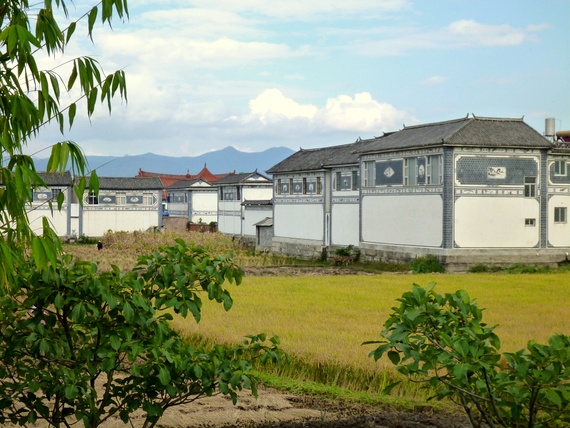 Driving past rice fields and mountains, we continued to the historic town of Xizhou. Like much of China’s tourist attractions, there was a massive entrance fee and an overly commercialized feel that turned us off. Still curious about the Bai homes (just look at those gorgeous trompe l’oeil facades above!) and their way of life, we went around to the backstreets and explored the real Xizhou neighborhoods. 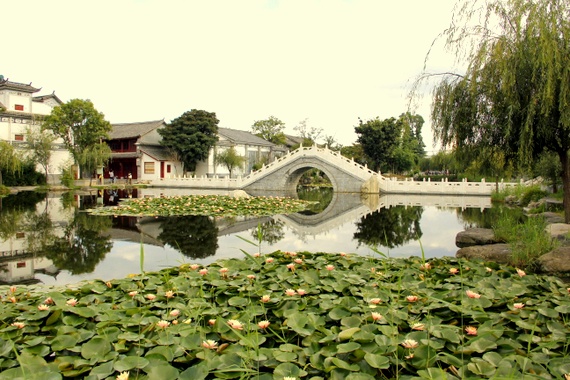 This charming bridge at the edge of the village felt like it was out of a storybook. 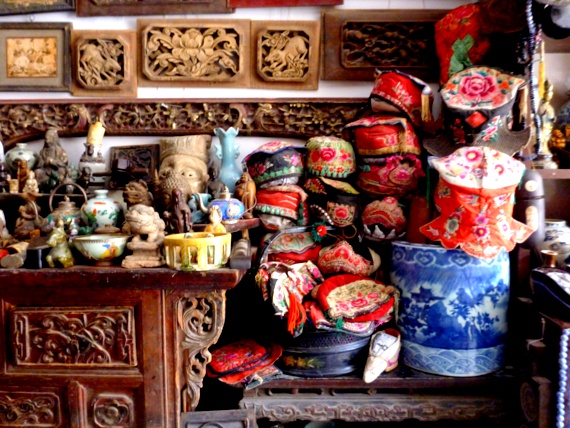 We popped into this antique shop and loved looking at the stacks of embroidered hats, wood carvings, old pipes, and local curiosities. 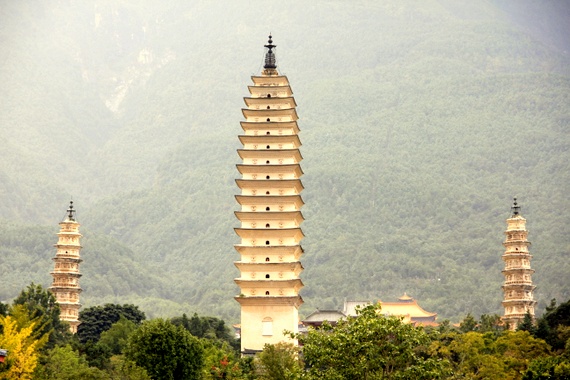 For our final stop on our roadtrip, we went to Yita Si and San Ta Si pagodas. Originally built in the 9th-century, these 69-meter tall beauties nestle at the base of the mountain just outside of Dali. 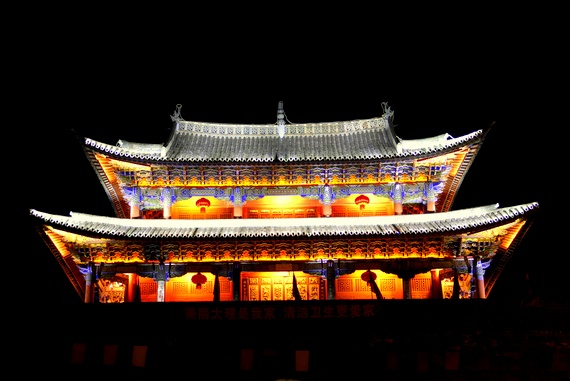 We got back to Dali at nightfall, just as the old town gates were lighting up. Walking up to the balcony, we took in views of the lively streets. Packed with hot pot restaurants, knickknack shops, and bus-loads of Chinese tourists (I think we were the only westerners there), Dali was definitely a great base for the night but the surrounding villages had us excited for what more remote Yunnan has in store.

21 thoughts on “The Gateway to Yunnan, China”