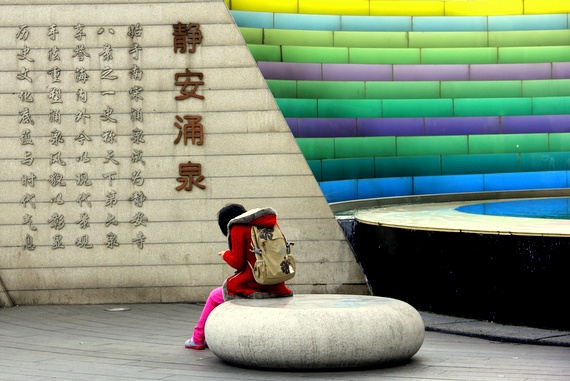 We heard such mixed reviews on Shanghai that we almost didn’t come here. “It’s just another big city” some people scoffed while others raved, “It’s one of the most exciting cities of the 21st-century,” …so with that we had to see for ourselves. With more than 4,000 skyscrapers and plans for over 1,000 more in the next decade, it’s definitely a metropolis on the move. It’s wild that Shanghai was once a sliced up city, owned in part by the British, Chinese, French, Americans and Japanese with each group running on its own rules and competing, not only in business, but in style. From Neoclassical architecture to futuristic towers, with the grimiest and chicest streets in between, Shanghai kept our mind and eyes wide open. 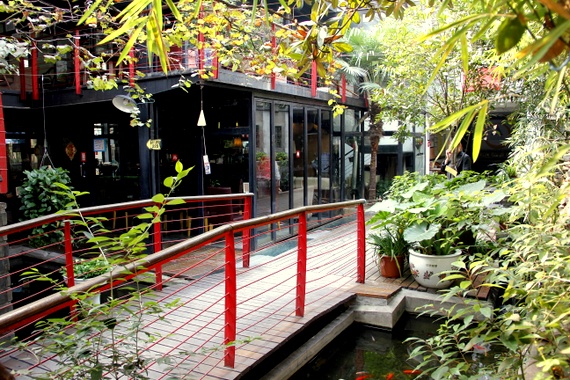 One thing that always helps a visit to a foreboding city is a great base. We checked into the very inviting MingTown guest house right off the Renmin Square and with their helpful staff and central subway-friendly location we felt ready to tackle the town. (As a side-note MingTown Hostels are around the country and always fantastic). 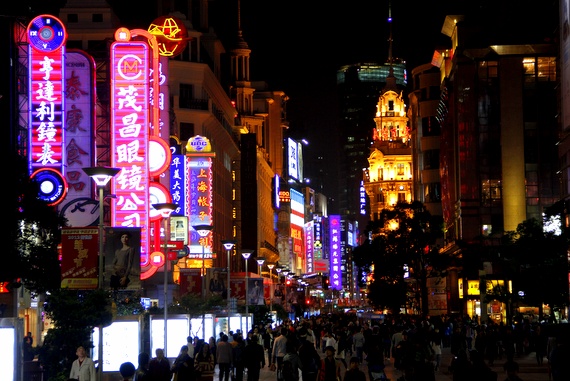 Passing along Renmin Square and heading out to the river is the city’s busiest shopping street, Nanjing Lu. We strolled past the fancy stores and zigzagged down the side streets eating amazing Shanghai treats like pan-fried dumplings and this grilled pork egg cheese sandwich that was unfathomably good. 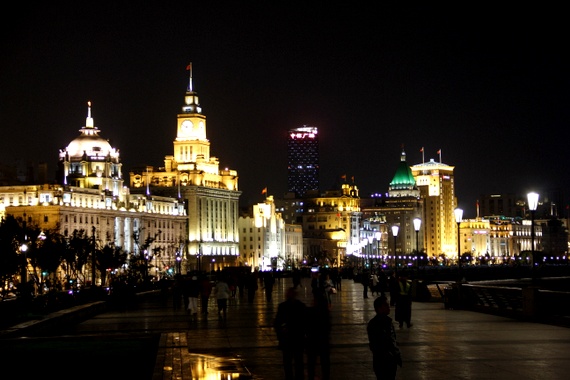 We arrived at the iconic Bund and were totally dazzled. This strip of the river was the 19th-century British base camp and hub of imperial trade in Asia until Mao put a communist halt on it in 1949. Today the strip of neoclassical and art deco buildings are luxury stores and hotels making for an even an extra spectacular stroll. 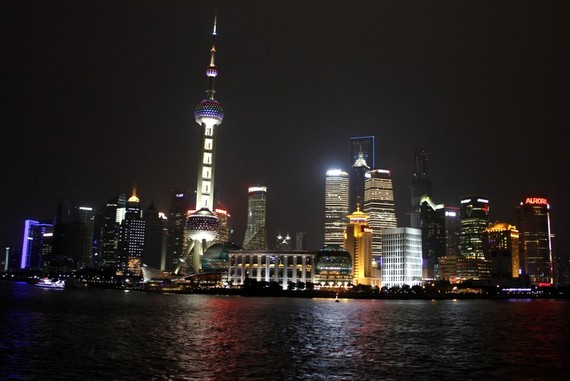 Across the river from the historic Bund sits Pudong, a district so futuristic it was used in a the sci-fi film Code 46, without any CGI. Looking up at the colonial buildings across from some of Asia’s edgiest skyscrapers is like being in limbo between entirely separate worlds. 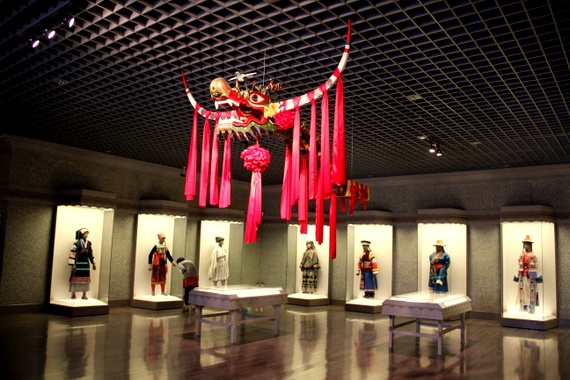 The next morning we went to our neighboring Renmin Park (People’s Park) to see the Shanghai Museum. More a national arts gallery than a city museum, it has permanent exhibits on Chinese furniture, calligraphy, seals, jade, and this colorful ethnic minority costumes exhibit. Having come from the far reaches of Yunnan it was cool to recognize some of the outfits. 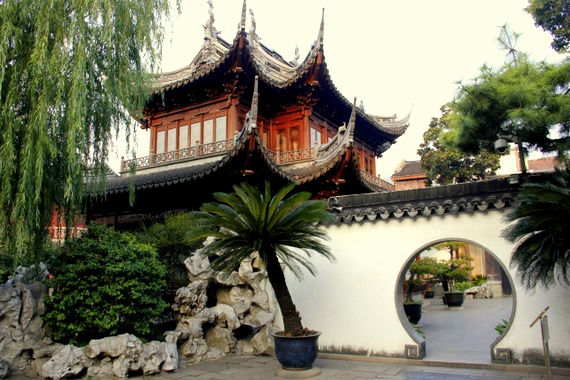 Shanghai is such a western mash-up but one true Chinese beauty is Yu Yuan garden. This 16th-century collection of pagodas, pools, bridges, and rockeries was stunning and surreal. 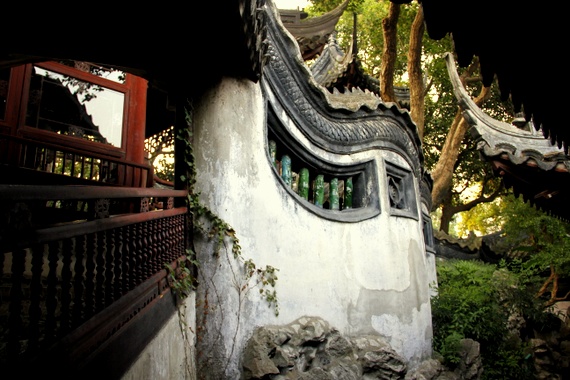 Doorways came in all shapes but rectangular–jagged rocks stood like sculptures and the serpentine walls were that of a dragon’s body (notice the scales). Exploring its never-ending passageways and pavilions, we lost ourselves here for nearly three hours.
Coming here actually inspired me to write a piece for Condé Nast Traveler on the doorways of China. Check it out! 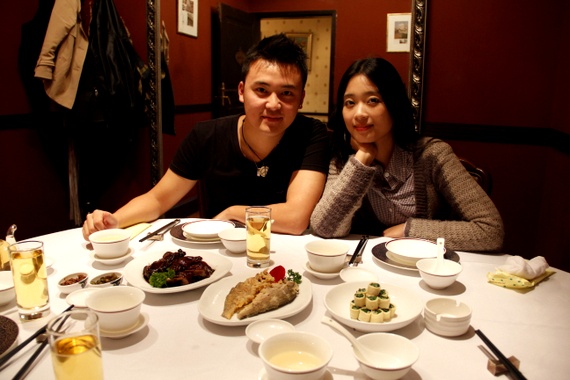 That night our Shanghainese friends, Michael and Sophie, whom we met river rafting in Nepal (the world is getting smaller) took us out for an incredible meal at his uncle’s incredible restaurant, Victorian House, and then out to the hip bars around Xiantiandi. These are both places we would have never had found—or experienced properly—without a local. Thanks Michael and Sophie!

Our locals tour continued the next day when we met Michael for lunch (and a haircut where he acted as translator) and to see this amazing temple by his office. The location of the centuries-old structure wedged between skyscrapers is almost better than the building itself. 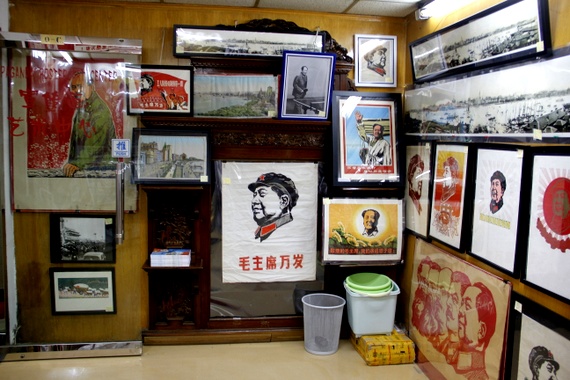 With my freshly trimmed hair swinging around my shoulders, we raced across the French Concession to make it to the Chinese Propaganda Poster Art Center. We got to the apartment-basement-turned gallery with a few minutes until closing and had to beg the surly attendant to let us in for the remaining minutes of the day. After our loop around the Mao pop-art, we weren’t quiet sure if this anti-democratic exhibit was a satirical or nostalgic for the good ole days. 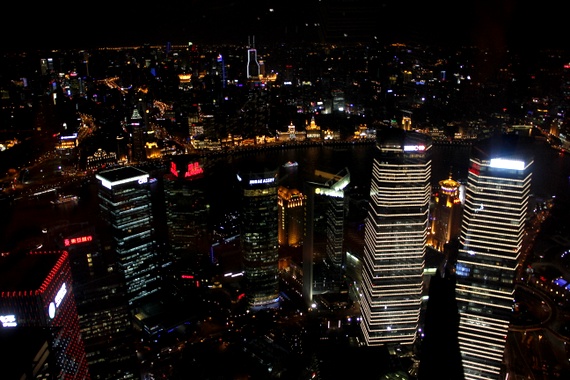 Shanghai is massive and in an attempt to understand its ever-growing magnitude, we had to get up high. The famous and very pricey Jinmao Obsersvation Tower in Pudong is the most popular lookout but we found the best the views without the fee. On the 87th floor of the Grand Hyatt Hotel is the highest bar in the world, Cloud 9, and it serves buy-one-get-one happy hour, delicious bar nibbles, a chill ambiance and knockout views to the to Bund and beyond. So, despite the naysayers, we left Shanghai with a good (lycheetini) taste in our mouth.