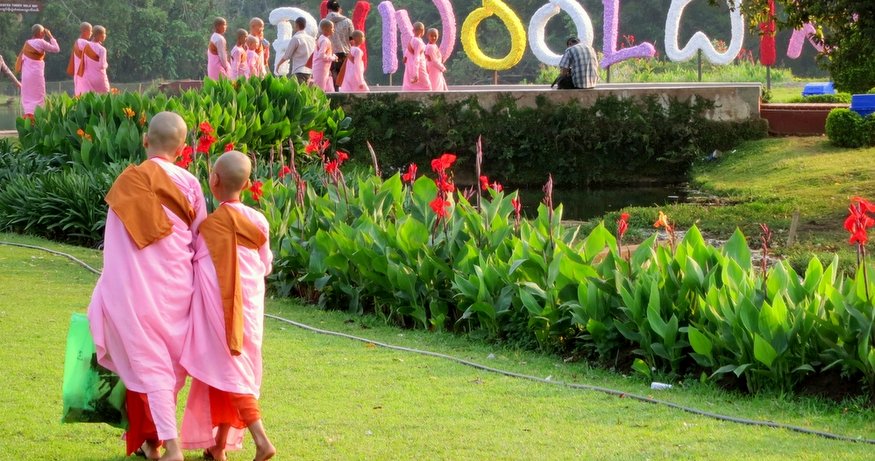 There is a traffic jam of Cinderella-style carriages outside the Pyin Oo Lwin train station. The trappings of the Victorian era and a cool breeze make this former British hill station feel instantly different from any other town we’ve seen in Myanmar. Set at 3,500 feet above sea level, Pyin Oo Lwin was the Brits’ summer escape from the Mandalay city heat. The English left with the fall of the empire in ’48 but their colonial mansions, plazas, and manicured parks remain and the Myanmar people have reclaimed this quirky city with a new-found pride. 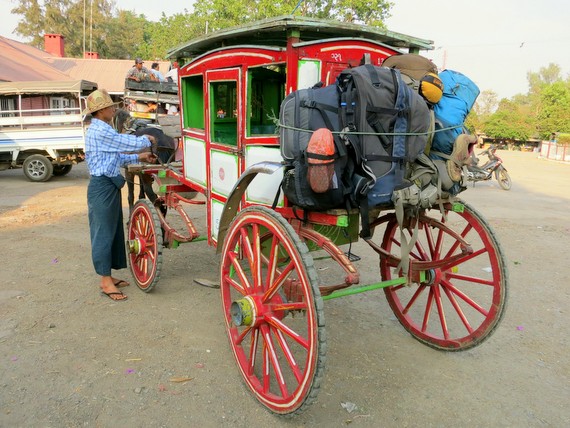 The horse-drawn carriages are more common than taxis in this town, so we strapped our backpacks to the hand-painted trunk and went searching for a nice guest house (as in: private bathroom and maybe air conditioning) for my birthday weekend. 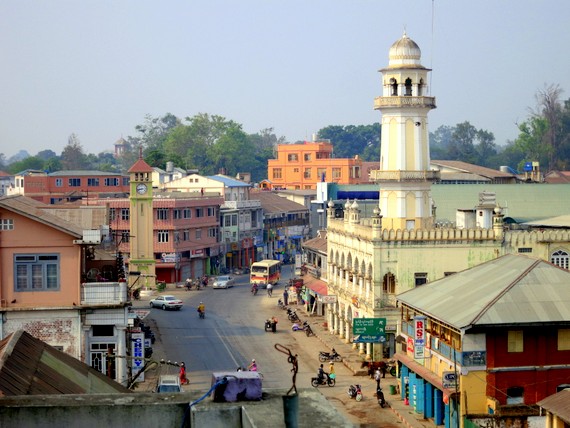 We trotted through town, passing an odd blend of Victorian homes, stupas, stables, mosques, Indian sweet shops and a Big-Ben-style clock tower. We found the decently nice Bravo Hotel with a lovely view of town for $24/night. 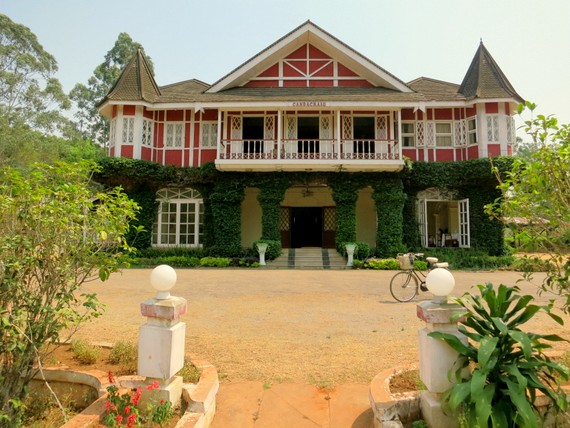 The outskirts of town are one of the highlights of Pyin Oo Lwin so we rented a bike for the day. Cruising around Circular and Forest Roads, we admired the colonial mansions and old British country clubs. The Candacraig Inn had its doors flung wide open so we wandered in–not knowing its considered by locals to be haunted! This would have explained its abandoned look and creepy dude maintaining the yard with a machete. 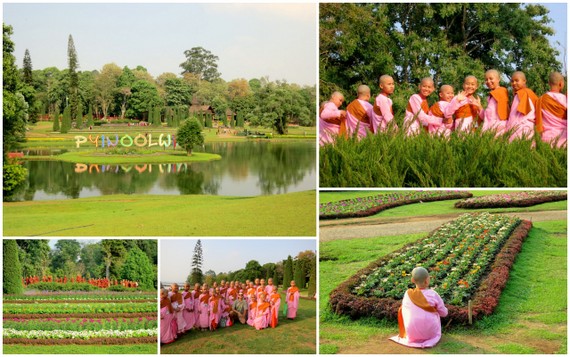 We continued our ride around the lake towards the National Kandawagyi Gardens. The Brits brought in a botanist from London’s legendary Kew Gardens to manicure this 382-acre park with orchids, roses, and dahlias, plus 480 species of other flowers, shrubs, and trees. The park was stunning but enhanced ten-fold by a novice monk graduation day! This meant hundreds of young monks in pink and brown robes lined up smiling for photos then frolicking through the flowers. Swoon!

We were watching the young monks dutifully complete their class photos, when apparently the greatest announcement ever was made: “Free Ice Cream!!!” The hundred little monks simultaneously squealed with joy then ran at top speed towards the snack bar. This eruption of pure happiness will stick with us for life. 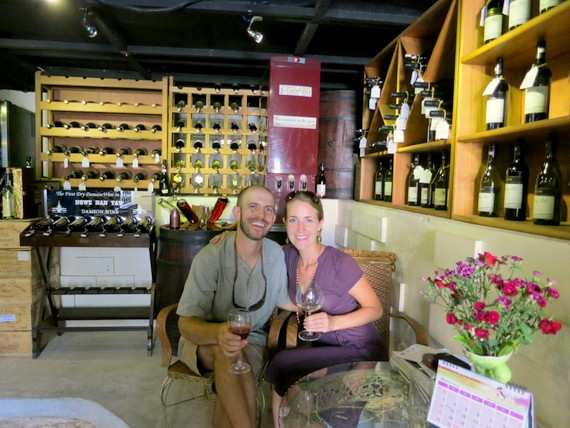 To complete an already lovely birthday we went to the Ngwe nan Taw winery for a cellar tasting (their Damson Plum Rosé is delicious!) and Mike surprised me with the a dinner reservation at in this adorable colonial bungalow turned restaurant, The Club Terrace. Thanks, love! 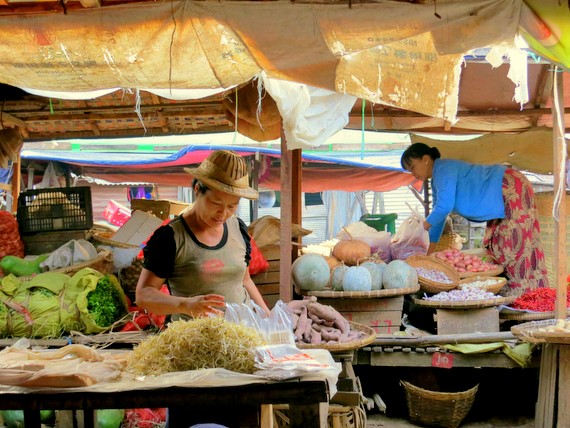 The following day we had to catch a bus to Mandalay, but not before a stop at the lively Shan market. The Shan are the second largest ethnic group in Myanmar and related to the Tai peoples of Thailand, Lao, and China’s Yunnan–giving this market an extra diverse mix of goods (see the slideshow for the fat grubs and flower-flayed fish). 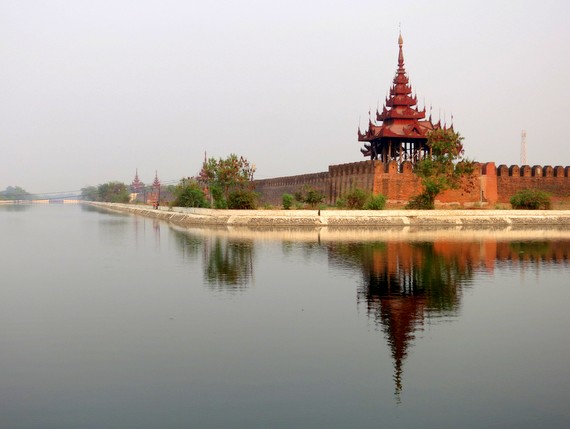 Mandalay was our last stop in Myanmar—more because of the airport than its stellar qualities. It’s a newish city (1857) with an unlucky past. Just thirty years after the Avva kingdom built its first palace and payas here, the Brits came in and took the place over; sixty years after that, Mandalay was bombed to smithereens in World War II. Today it’s an even newer hodgepodge but it still has a few gems. 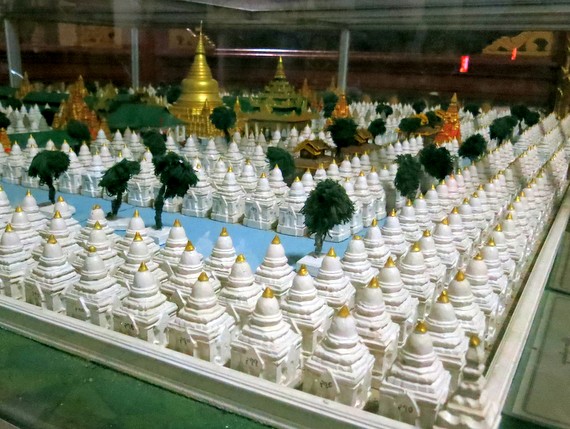 The world’s biggest book is still proudly found in Mandalay at the Naha Lokamarazein Kuthodaw Pagoda. It spreads over 13 acres of land as 729 massive marble pages each in their own stupa-like structure. We took this picture of a model to grasp its scale. 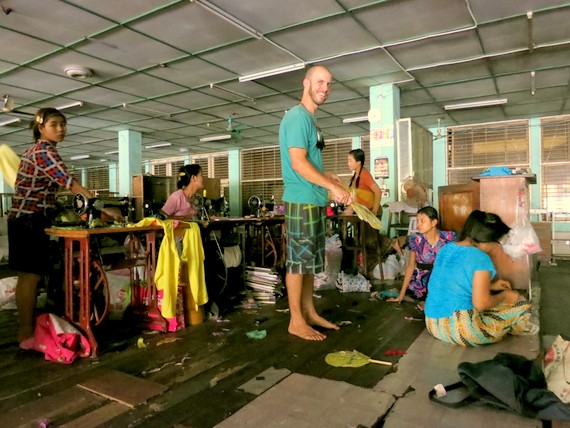 Zegyo market is the oldest and most important market in Mandalay; we came here to check it out and to get some of our gear darned before we left for New Zealand. We walked into the main floor, stacked with goods of every kind, and asked if there was a tailor in the building. We were directed up three-flights of broken escalators, past the abandoned stores, and followed the whizzing sound of sewing machines. I’m not sure if a nicer description would be fallout shelter our sweat shop, but the smiling faces let us know it was okay to enter. We showed the ladies the holes in our bags, shoes, and shirts and asked how much it was to mend them…and they insisted on doing it for free! Not knowing how to repay them, Mike is here fanning them as they worked.

As you can probably tell, we are over the moon for the people of Myanmar. If you too want to experience the heart-warming kindness of its people, you have to travel without a tour group and learn a bit of the language. We learned more of the local language here than in any other country—not because it was easy or we stayed here longer–but because the people were so friendly, we wanted to get to know them better! Watch this video for a quick language lesson from our local buddies and get closer to our favorite country in the world.