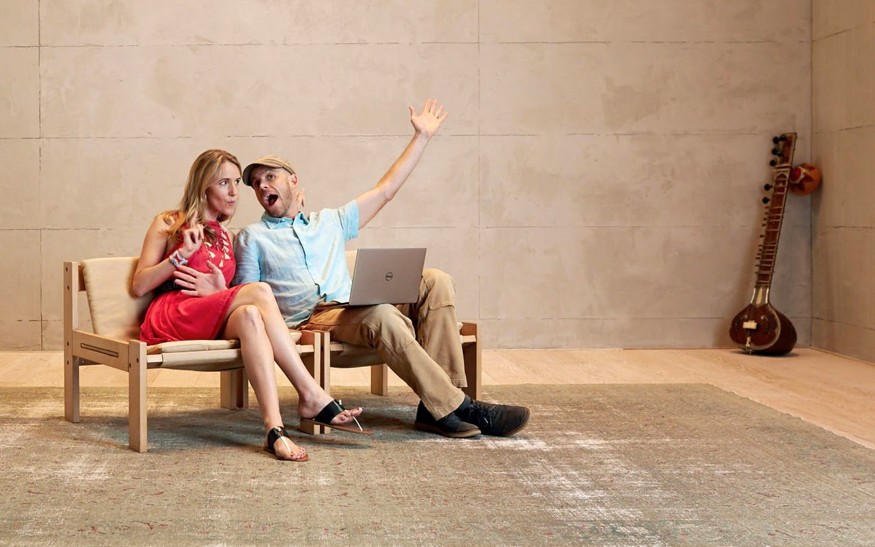 A few months ago, the folks at the McCann Erickson (one the largest advertising agencies in the world), reached out to us. They said they were working on a Microsoft television campaign, showcasing how real people use PCs to achieve their passion, and they thought HoneyTrek could be a good fit. Flattered and flabbergasted, we started an intense interview process, and three months later we are on national TV! The whole experience from start to present has been incredibly humbling and absolutely surreal…here’s how it all went down. 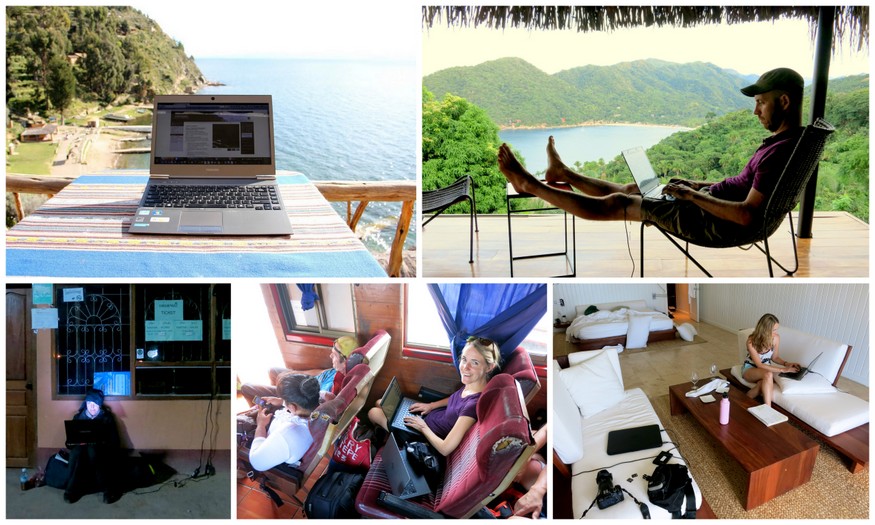 HoneyTrek began as a grand idea to honeymoon around the world, immerse ourselves in other cultures, seek life-changing adventures, and inspire other people to think beyond their country’s borders. Having ditched our desk jobs to follow our dream, we run HoneyTrek from our “satellite offices” (aka. beach chairs, bus stations, housesits, ferry boats, jungle huts, etc.) All we need is a laptop and each other to set up HoneyTrek HQ. 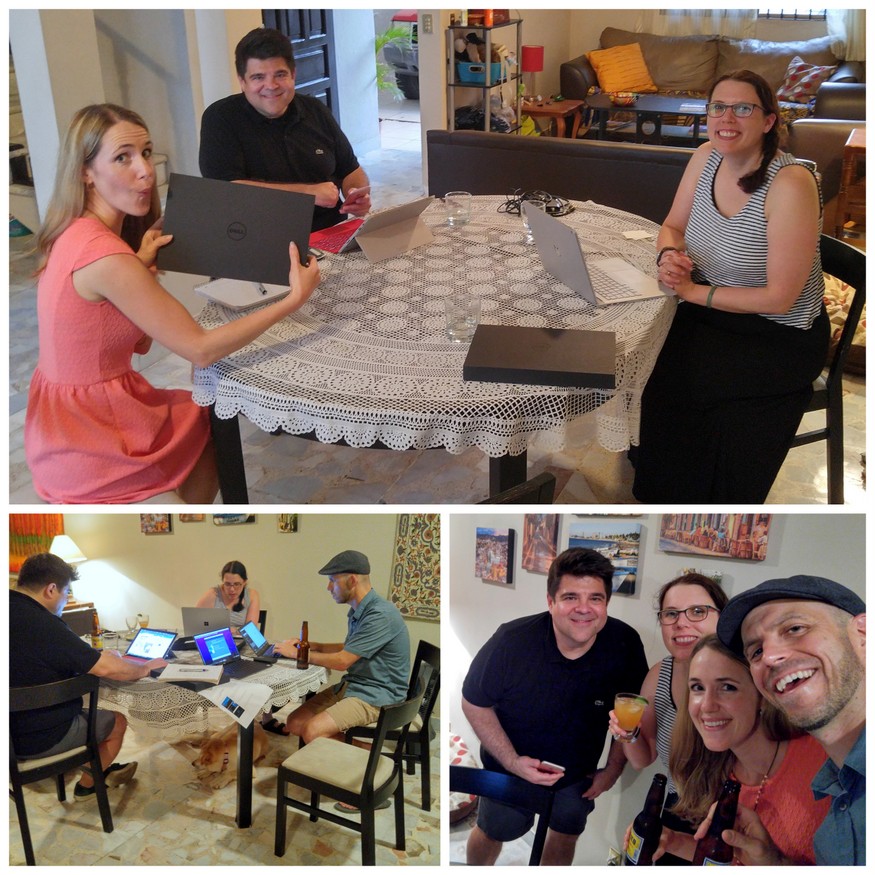 After a few rounds of Skype calls with then McCann and Microsoft teams, they said they wanted us to test out the new Dell XPS 13, loaded with Windows 10. Trying to contain our excitement, we sent them our mailing address in Mazatlan, Mexico. Their email reply (on a Friday) said, “Thanks for the address. The Senior Manager and Director of Global Advertising will be arriving on Tuesday.” Wait, what? They flew their upper management from Seattle to Mazatlan (totally crazy side note: Seattle & Mazatlan are actually Sister Cities…must be fate!) to hand-deliver and set up our computers in person! We spent the next three weeks exploring the latest Windows features (Microsoft Edge, Cortana personal assistant, Universal Apps, 3D Maps…to name a few) and putting the laptops through the HoneyTrek ringer (7-hour bus rides, sun-drenched work spaces, blogging marathons, etc.) and it passed with flying colors. One thing led to the next and before we knew it, we were on a first class flight to LA to shoot a TV commercial. 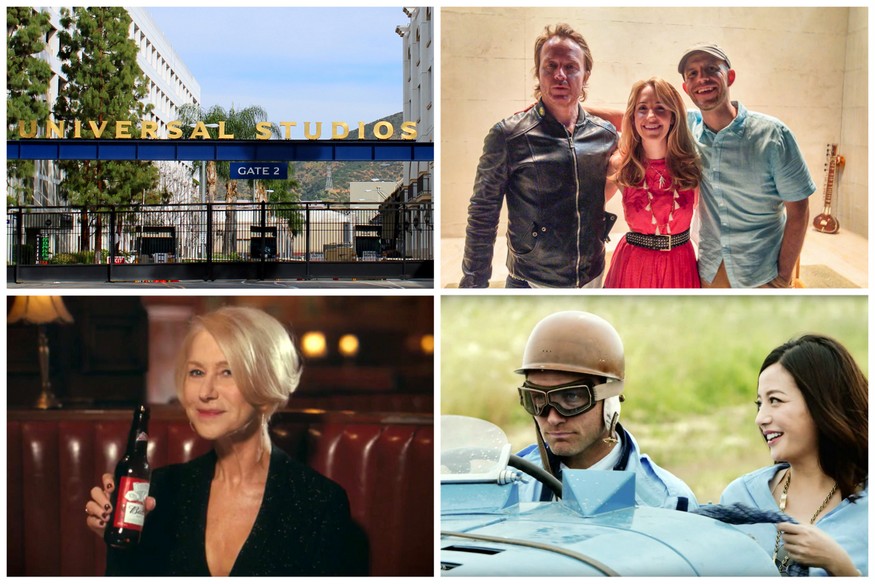 We pulled up to the gates of Universal Studios, and it was buzzing with camera crews, set builders, show runners, and glamorous people. A man with a RSA Films badge walked up to us, “Are you guys HoneyTrek?” With a mega brand like Microsoft we knew this wasn’t going to be a ragtag crew, but we didn’t realize they hired one of the best production companies in the world. RSA stands for Ridley Scott Associates; he’s the Academy Award Winning director of Gladiator, Black Hawk Down, The Martian, and a dozen more acclaimed films. He has an incredible team, including his son and director for our commercial, Jake Scott. You’ve seen Jake’s work…the Budweiser “Simply Put” Super Bowl ad with Helen Mirran, Johnny Walker’s “Gentleman’s Wager” with Jude Law, and music videos for U2, REM, Radiohead, and plenty more. No pressure, HoneyTrek. 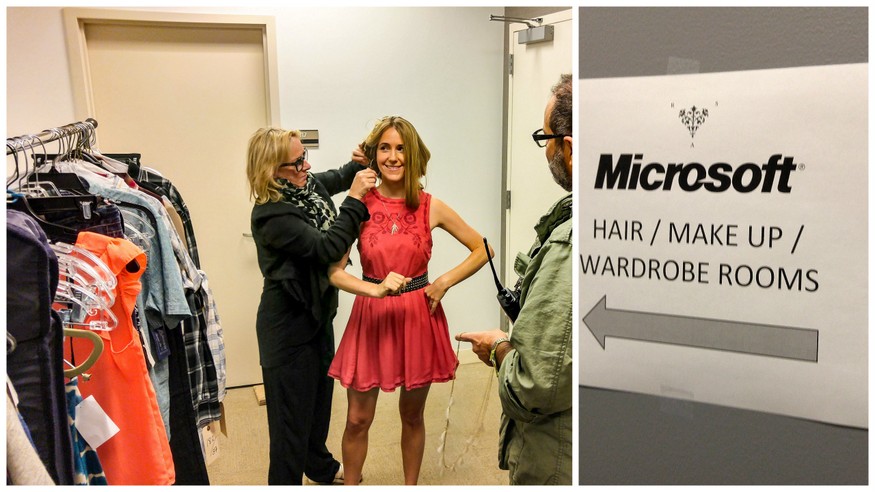 We were escorted to Wardrobe for a fitting with the two costume designers. Kim and David had been studying our “style” from photos and videos over the past week and selecting outfits to match. They had us try on and photograph a dozen different looks, incorporating some of our favorite personal accessories, until we had solid options to show Jake. Red linen dress, a beaded bracelet from Mazatlan, and leather sandals for Anne and some weathered Carhartts, a short-sleeve button-down, and the signature green hat for Mike. 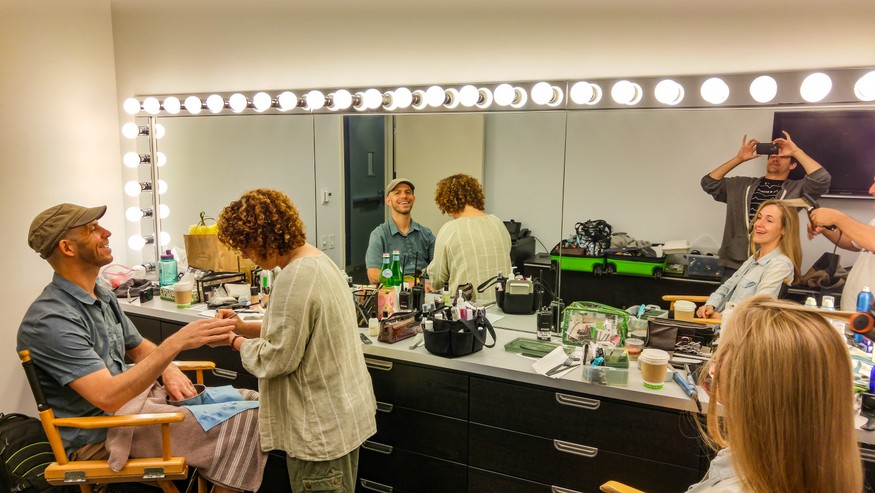 We tried to get a good night sleep but all the nerves and excitement woke me up at 4am, so I decided to go to the gym. I walk out of our hotel room on the 17th floor of the Universal Sheraton and I nearly jumped out of my skin…and so did Bernie Sanders’ aides. It was election day in California and The Bern was staying two doors down from us! But I digress…I did some yoga, had some breakfast, then we got picked up at 6am for hair, makeup, and nails. How glamorous! 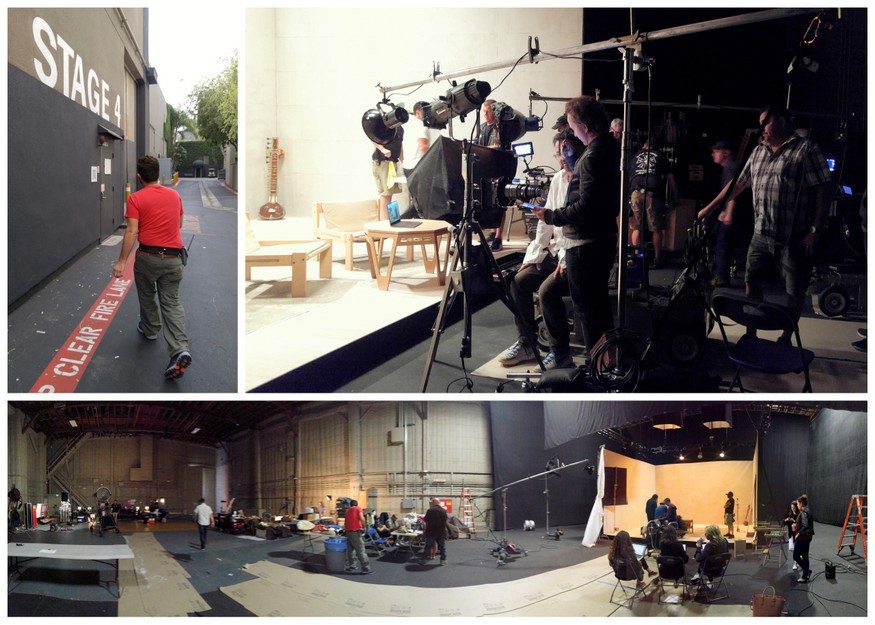 Primped and preened, the Assistant Producer escorted us to Stage 4. In a space the size of an airplane hangar, there were over 100 people…setting up lights, sound, cameras, and props for the “HoneyTrek Inspired” set. We rounded the corner, and everyone paused to stare at us. Gulp. 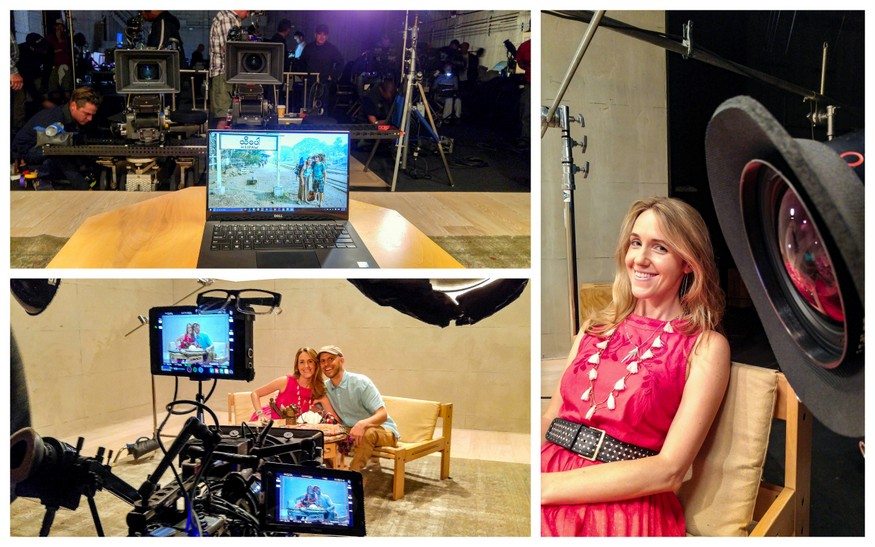 It was pretty intimidating having all these people and massive cameras around, but Jake, with his laid-back vibe and disarming English accent, somehow made us feel at ease. He sat at the edge of the stage and just asked us questions about HoneyTrek and how we use our tech. They didn’t give us a script…in fact, they barely gave us any info about what we’d be doing to keep our responses extra natural. We just riffed on travel and walked them through how we edit photos, compile videos, do social media, and post blogs. Not gonna lie, it was still pretty intense but so cool that they trusted us to shoot from the hip. 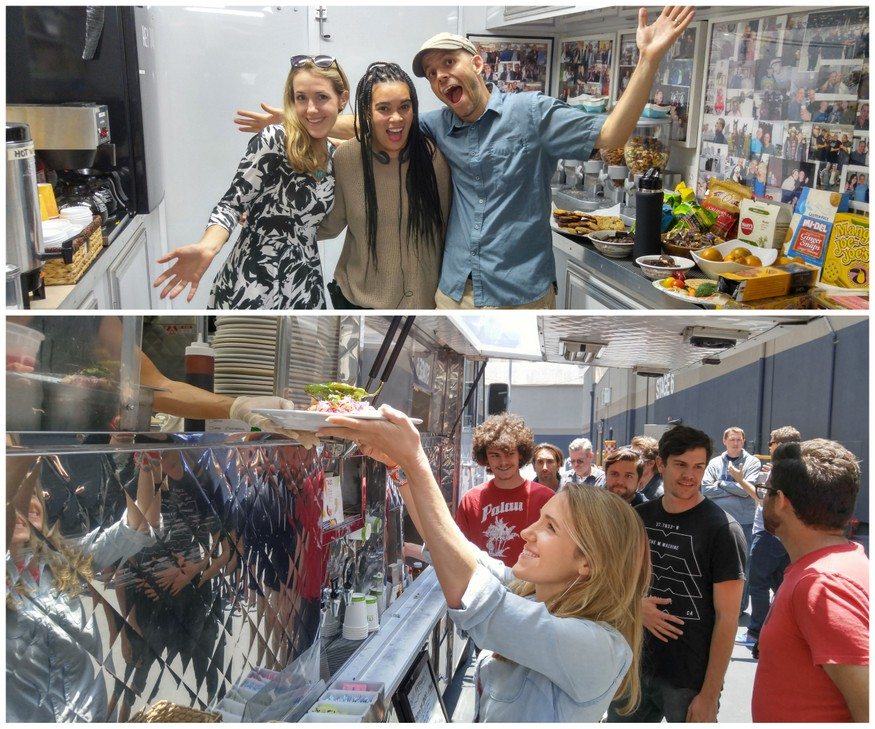 We made it to lunchtime, phew! We don’t know how people who work on these high-profile sets don’t get fat. Lunch was a smorgasbord, the food truck was always open, and the crafts service team delivered gourmet snacks every couple hours…and we loved every minute of it.

Once we completed the shot list of nitty gritty stuff, they had us share the stories behind some of our favorite travel treasures. With Maasai spears, Japanese Kabuki masks, Bolivian miners lamps, and Tibetan Cow Bells, we had a little fun with props…if only I knew they’d use the footage of my bell booty shake on TV! 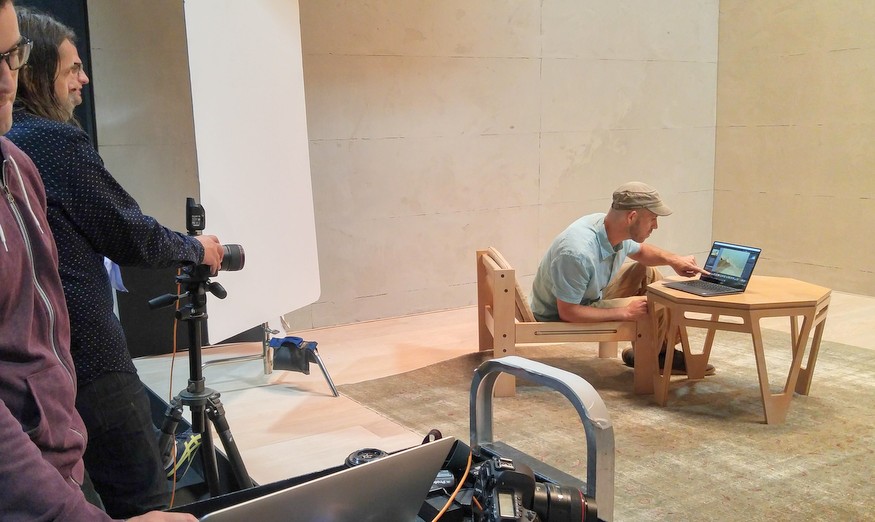 As the film crew deconstructed their gear, a 12-person photo team arrived for the still shots. In addition to what’s on Microsoft’s website right now, we might be in some print ads around the world. (They had me put on a sweater so it could run in the Middle East.)

After we shot the commercial, McCann told us there was no guarantee it would air on TV. They asked us a few follow-up questions over the next two months but still gave no indication if and when it would run. Then last week, we get an email saying: “It’s airing on Monday, don’t tell a soul!” We were bursting at the seams and in a state of total amazement that 10 hours of intense filming could be culled into 30 beautiful seconds.

With so much footage and so many platforms to share it on, the team actually made three versions of the spot. Here’s one of the 15-second clips you may see around social media or Hulu.

We are so grateful for this opportunity to work with such a talented team and respected brand. We hope we did everybody proud!

58 thoughts on “HoneyTrek is on National TV! Go Behind the Scenes of Our Microsoft Commercial”