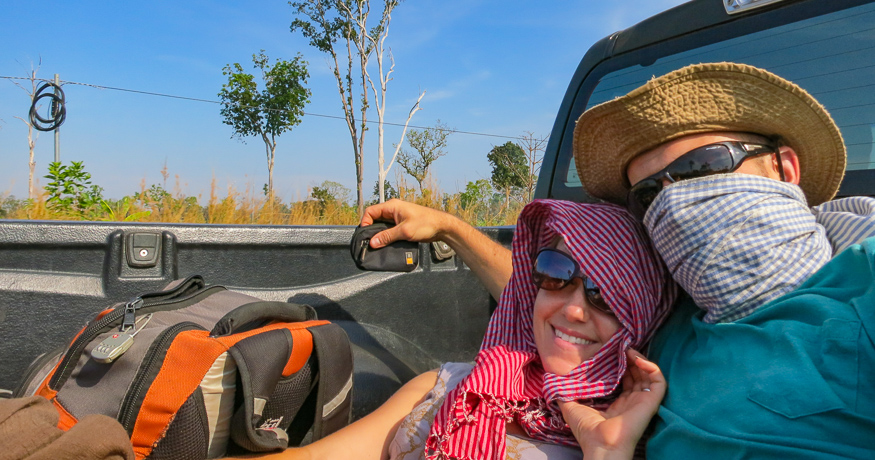 As the saying goes, it’s about the journey not the destination, and this could not be more true of our renegade road trip through northwestern Cambodia. We’d heard that within a couple hundred kilometers of Siem Reap was the mother of all overgrown tree temples, a former Angkorian capital, and finally a 1000-year old clifftop temple. This seemed like a natural progression of sightseeing, despite the fact it would bring us all way back to the border of Thailand and there were no bus routes connecting any of these locations. With our packs on our back and our thumbs in the air, we set off onto the Cambodian open road. Here’s the story of hitchhiking in Cambodia. 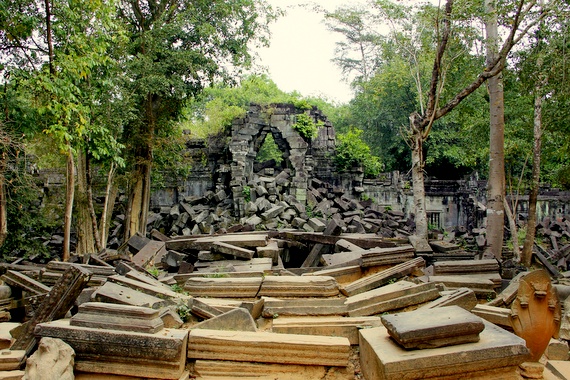 To get ourselves started on our three-part journey, we took a tuk tuk to the first Angkorian temple of the road trip, Beng Mealea. There are actually a few tour buses that head this way from Siem Reap but we preferred being pulled by a motorbike down a dirt road for two hours. We arrived to most beautifully overgrown temple just before sunset and as the last tour bus headed back to Siem Reap. Perfection! 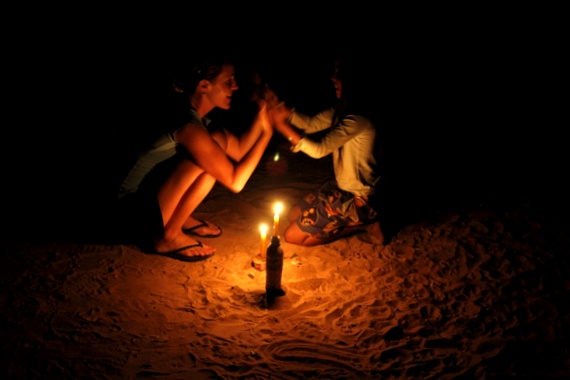 If tourists even hear of Beng Mealea it is solely billed as day trip, so there are literally no hotels in town, just a few families that lay down a mattress in their home upon request. Asking around in Khmer, our tuk tuk driver helped us find a home-stay on a farm. The family didn’t speak a word of English but we communicated through the universal language of paddy-cake games. We played “Slide,” counting our claps in English and Khmer–smiling when we got it right and laughing when we got it wrong. We may not have had electricity or running water, but this was so much better than any hostel.

A huge benefit of spending the night in Beng Mealea is not only the opportunity to stay with a local family but to beat the tourist buses the next day. The place is empty after 4pm and until 11am! The only people there were a few boys who lead “tours” of their local playground. Watch this video to see a glimpse of this jungle gym of a temple. (Sadly we didn’t get any video of the part where we were climbing fallen walls and swinging from vines with the kids…next time we’ll bring the GoPro.). 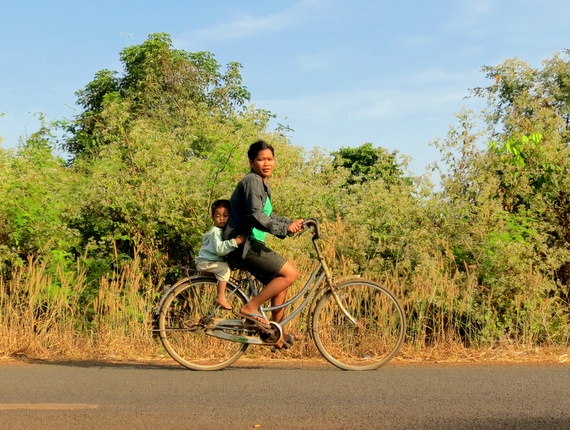 To get from Beng Mealea to our next destination, Koh Ker, there is one bus, but we missed it by hours…let the hitchhiking begin! We took this snapshot (and a few other fun ones in the slideshow) from our perch on the side of the road…How cute is this boy napping on the bicycle?! Though hitchhiking can be a little slow going sometimes, it’s a great opportunity to sit back and watch local life roll by. 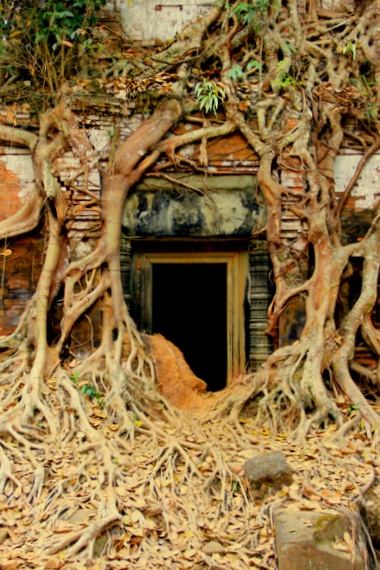 Ultimately, we got picked up by a few lovely NGO workers on their way to drop off grade-school teacher training materials. Adding to their goodheartedness, they dropped us off at the entrance to Koh Ker, the capital of the Khmer Empire from 927-947. What’s left today is a smattering of temple ruins, some in heaps of stone and a few being miraculously supported by beautiful strangler figs. 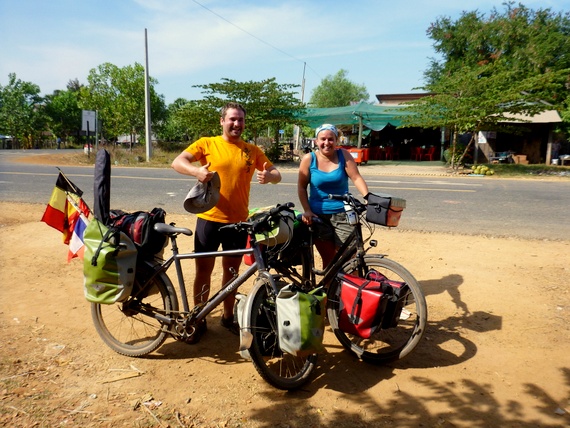 Very few travelers make it to Koh Ker and if they do…they are probably Belgians biking around the world! No joke, in this super rugged local town we met not one, but two pairs of Belgians doing global rides. Check out this couple’s blog GuitarBiking.com to hear more about their incredible journey. 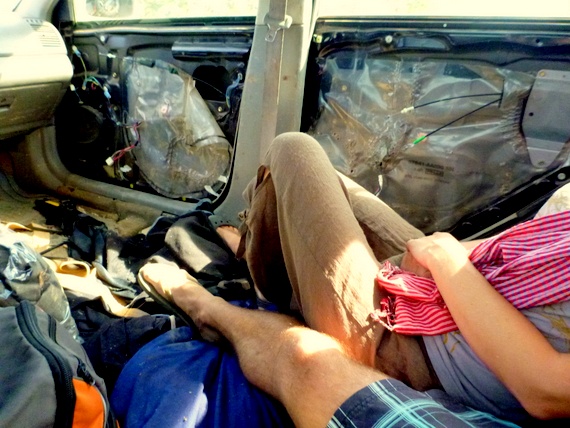 Hitchhiking to a destination is rarely achieved in one fell swoop so in waiting for our second leg of the day, the Belgians actually caught up with us. I would like to blame the following bad judgment on their distraction from our task…but this was the ride we flagged down: A car gutted from the trunk to dashboard with nothing but a metal frame and a driver’s seat. When the guy opened the door by pulling one of the dangling metal cables, this should have been a sign that this was perhaps not the best idea, but we got in anyway. This 30-minute stint in the shell of a speed demon’s car was one of the few times of the HoneyTrek that I thought it might be the end, but once again we’ve lived to tell the tale and laugh every time we recount it. 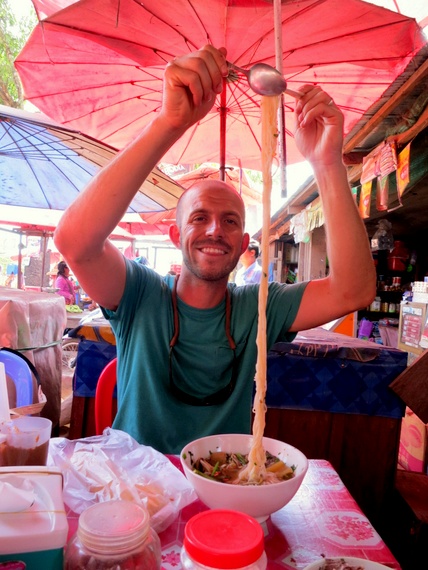 Feeling like we needed to celebrate our survival and arrival to our temple province of Preah Vihear, we sat for a minute at the local market and enjoyed the longest noodle soup. As it turns out the clifftop monument we had set out to see was still another 15km away…the transit adventure continued with the two of us on the back of a single motorbike, followed by a switch to two more powerful motorbikes to make it up the 1,722-foot mountain.

Prasat Preah Vihear is a highly controversial Cambodian temple and UNESCO heritage site. It sits on the border of Thailand and Cambodia and has belonged to both countries at different points…depending on the victor of the latest battle. As a historically Angkorian temple, Cambodia has won the rights to this ancient treasure but the site doubles as army bunker just in case. During our visit, one solider pointed out the fun fact that this temple can be seen on a Khmer 100 riel bill. 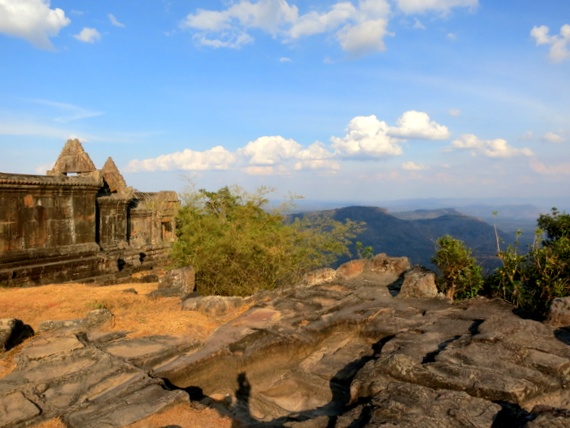 We originally thought schlepping to the end of the country to see this temple may not be worth it, but the spectacular views debunked that notion and the journey to get here turned out to be one of the best parts.

Have you ever hitchhiked? Have any fun thumbing tales?

19 thoughts on “Hitchhiking in Cambodia”