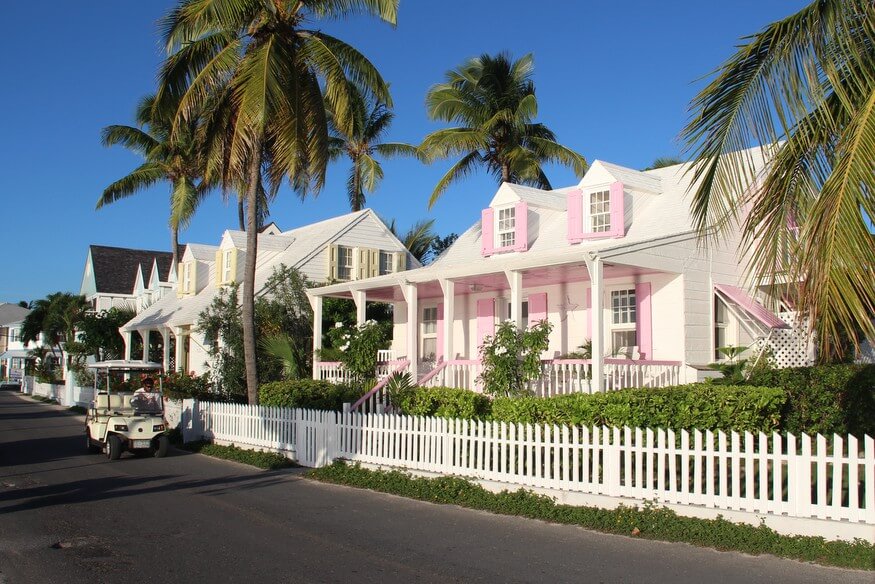 We got an email asking, “Have you ever honeymooned in the Nantucket of the Caribbean?” It was this intriguing note that brought us to Eleuthera and Harbour Island, the former British capital of the Bahamas with its pastel-colored colonial homes, pink sand beaches, and golf-carts-for-cars. Sure, it has similarities with Nantucket’s charming clapboard homes and sailing culture–but it’s got the spice and sunshine of the Caribbean. We spent three days on the uniquely fabulous Harbour Island, followed by the quirky Spanish Wells, and ending in Nassau…the metropolis that strings the Bahamanian islands together. 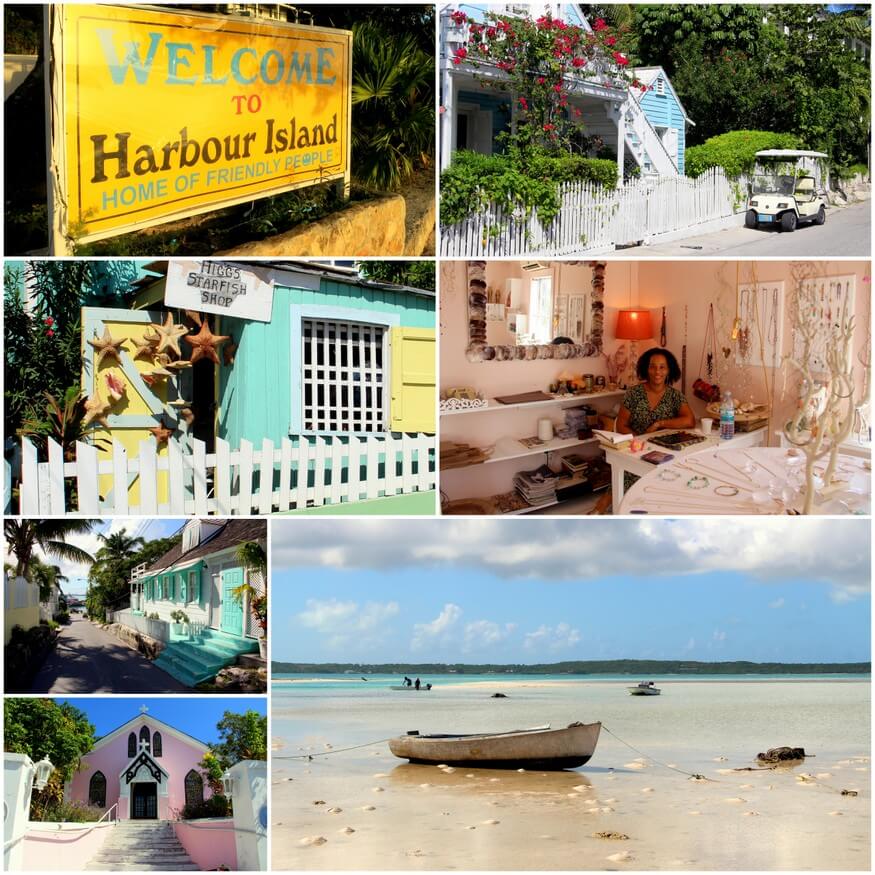 Taking the 10-minute water taxi across from Eleuthera, we reached the 3.5 x 0.5 mile Harbour Island and its one and only town: Dunmore. Named after the loyalist governor of Virginia who fled the States when the Revolutionary War didn’t go his way, Dunmore Town is like a colonial dream in technicolor. From the houses to the sand to the sea to the people, everything is vibrant and full of contrasts. If it gives you a sense, India Hicks’ designer boutique is directly across the street from Eva’s Straw-work shack; their top-notch restaurants serve fish caught from hand-thrown nets; and while there are posh beach bars, the best parties are at the liquor store. 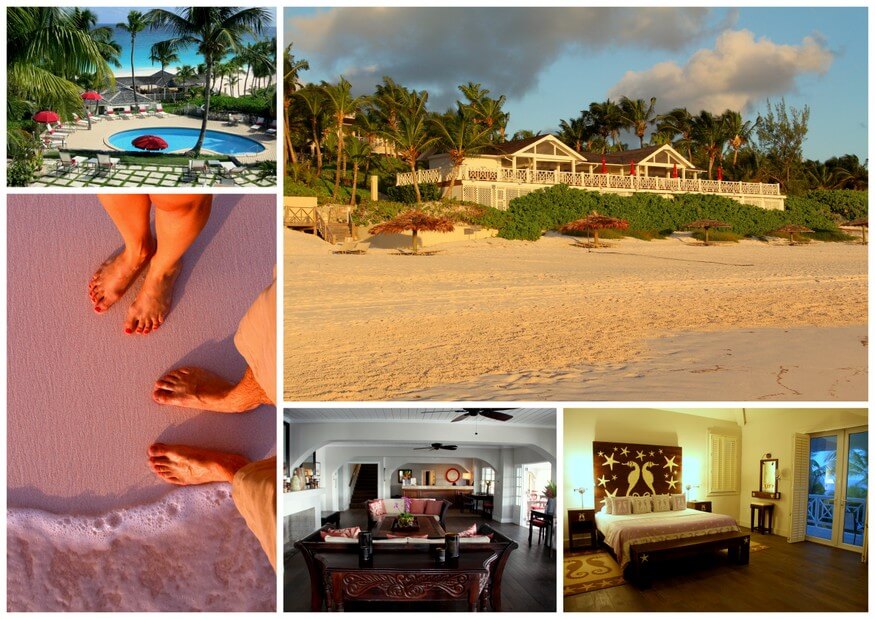 The woman that emailed us about the “Nantucket of the Caribbean” represented Coral Sands: One of the first resorts to attract the Hollywood set, dating back to the 1960s, and the latest on the island to get a swanky renovation. Their name comes from the three miles of truly pink sand beach—one of the few and finest in the world. There is a steady and melodic breeze that wafts through this open-air hotel, rustling the palms and amplifying the sounds of the ocean. From décor to locale, Coral Sands has serenity written all over it. 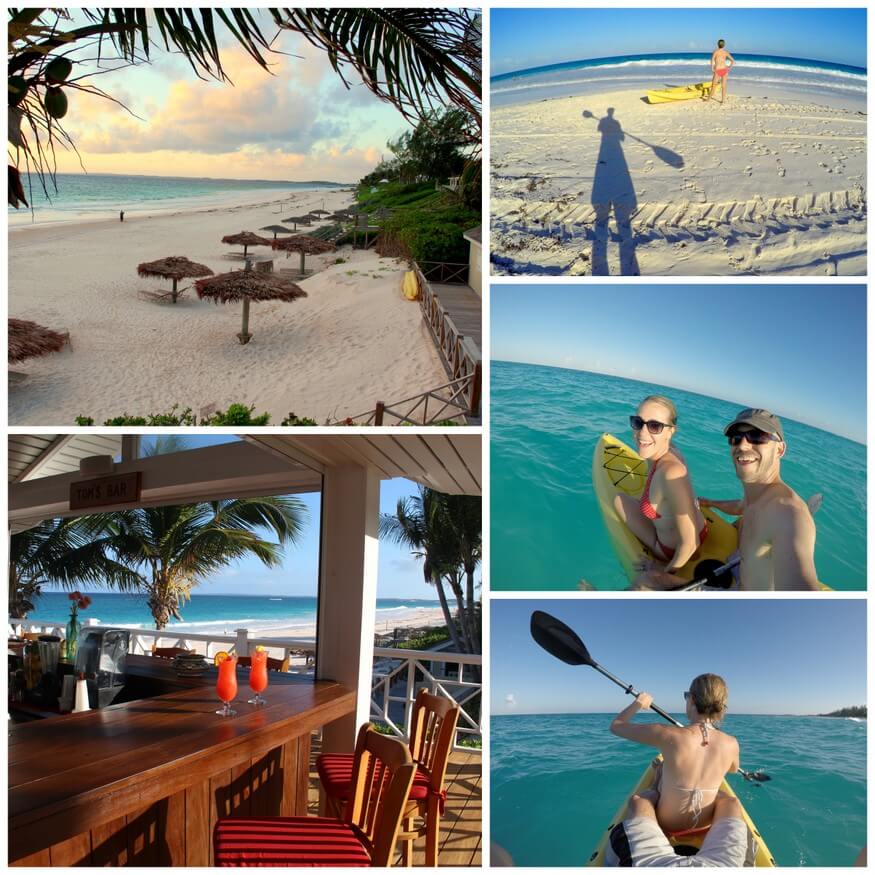 Time slows here and its completely acceptable to take hours to move a few hundred feet. Starting with a morning stretch on our balcony, down to the Terrace restaurant for breakfast, dipping in the pool, stopping at the Beach Bar for Bahama Mamas, flopping under a palm umbrella, and slowly building up the energy for a sea kayak–this was rare and lovely lazy day for us. 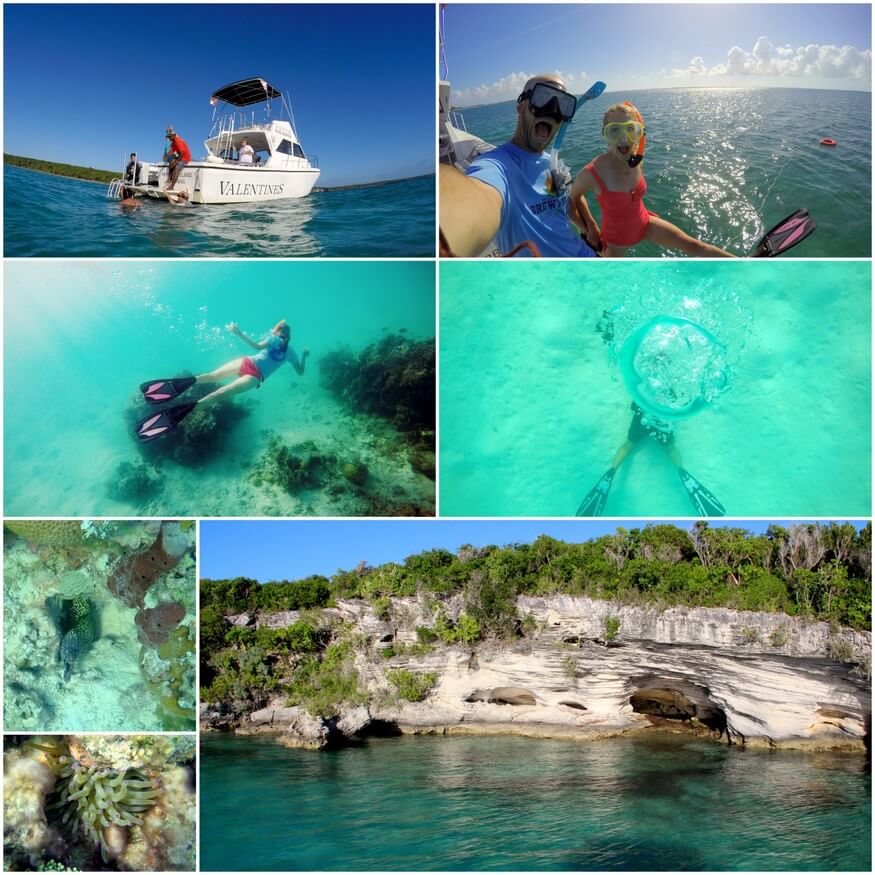 The next day we hopped on a boat with Valentine’s Dive Center to snorkel Gretchen Reef and found nurse sharks, porcupine fish, yellow rays, and spotted eels. Though our favorite part may have been this cave on Man Island with its wavy lines like sculpted clay. 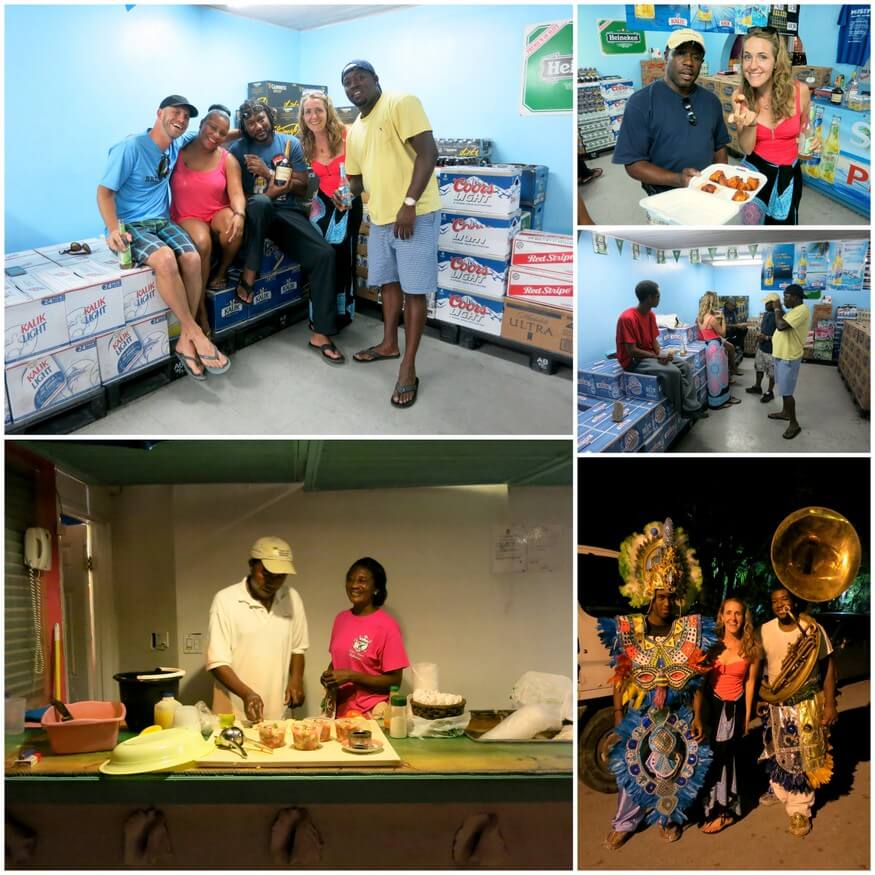 We popped into a bottle shop for some sunset beverages and found a bunch of locals hanging out, mixing drinks, and jamming to the cashier’s radio. While checking out, we asked a lady with a pink drink and lipstick to match, “What’s tonight’s cocktail of choice?” She replied, “Rosé in Wanda-land. Want to try?” Larger-than-life Wanda poured us a drink and so began three hours of laughing and dancing with our dozen new friends. The liquor store closed but did this stop the party? Heck no! Everyone just posted up across the street at Queen Conch for some spicy, fresh seafood salad and the rest of the Hennessy and Kaliks! They said they had never had tourists hang out like that. With people this cool, they don’t know what they’re missing.

P.S. To cap a perfect night, a Junkanoo band –decked out in the bedazzled Bahamian festival costumes—was at our hotel giving a special wedding performance. This tradition is usually reserved for the December holiday but we got a sneak-peek from our balcony!

The Island of Spanish Wells 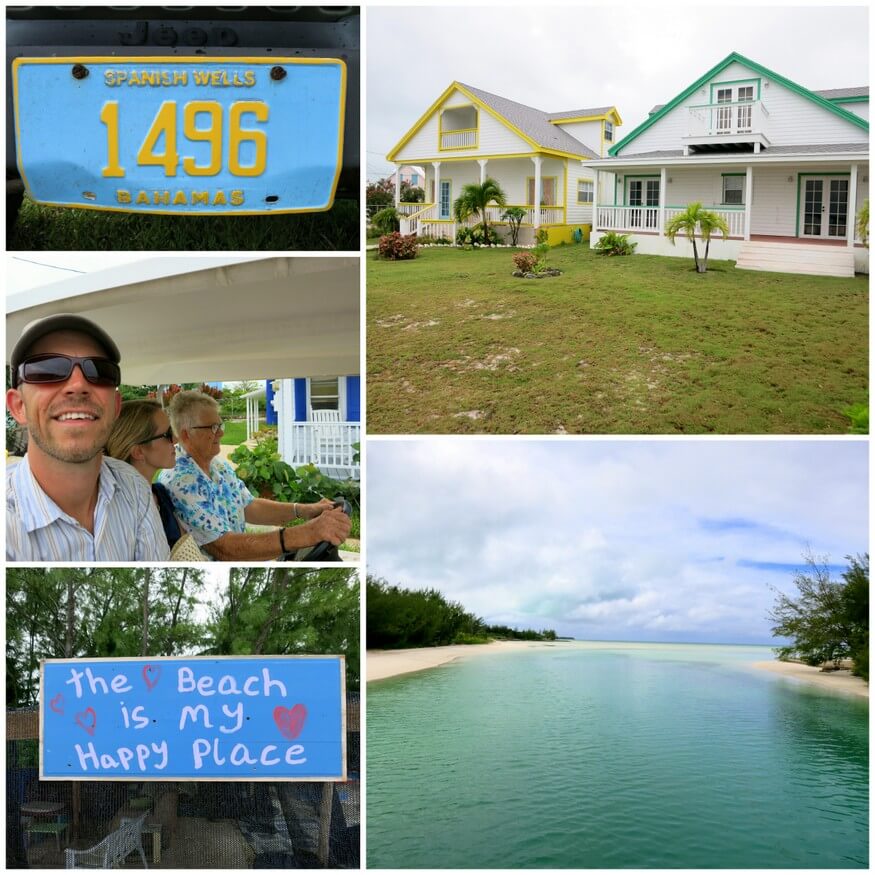 Everyone kept telling us about the neighboring island of Spanish Wells and saying how “special” it is. The 1,500 inhabitants on this two-mile long island stem from the same handful of European families, dating back to the 1600s. Maybe its isolation, maybe its little inbreeding (five names dominate the phone book), but this virtually all-white fishing village has developed their own Bahamian sub-culture and a Scottish-esque accent. That said, everyone was incredibly nice–we couldn’t even walk a city block without someone offering us a ride in their golf cart (the main form of transport). 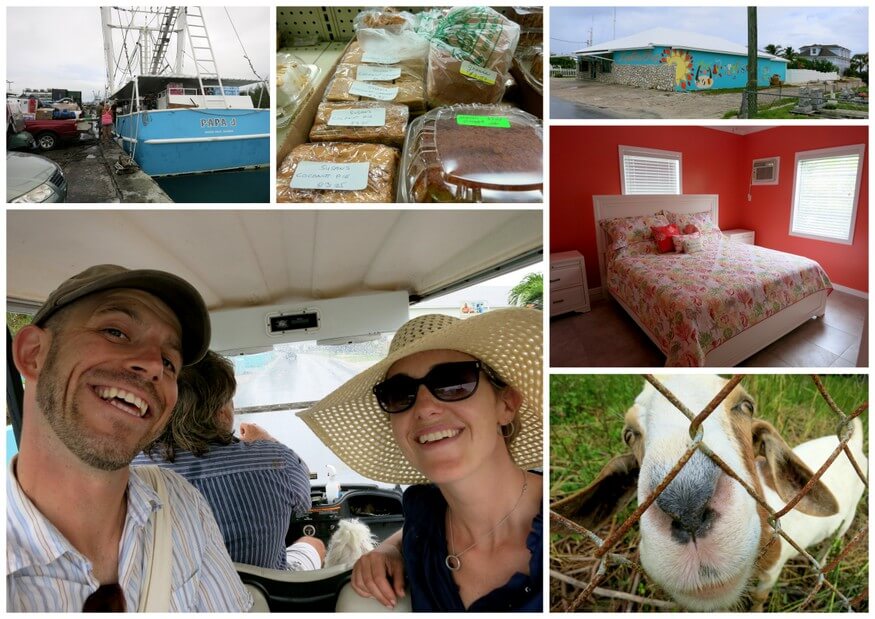 During our first golf cart ride, we asked Shirley the cute little old lady driver, “Where is the heart of town?” She replied, “Oh, we just passed it.” That’s how small and little to do there is in Spanish Wells. So for our own entertainment, we just started accepting rides from everyone who stopped for us (five in total) and drove in circles chatting with the locals. Our next encounter was with chain-smoking Richard and his lap dog, Peanut. He was so eager to give us a lift, his golf cart skidded sideways and nearly hit us. When we told him we were travel writers, he insisted we “review” his sister’s new rental cottage. She gave us a house tour then dropped us off at the grocery store so we could try Sheenah’s pineapple cake (local bakers sell their baked goods on consignment, so look for Sheeah’s handwritten sticker when you shop.) 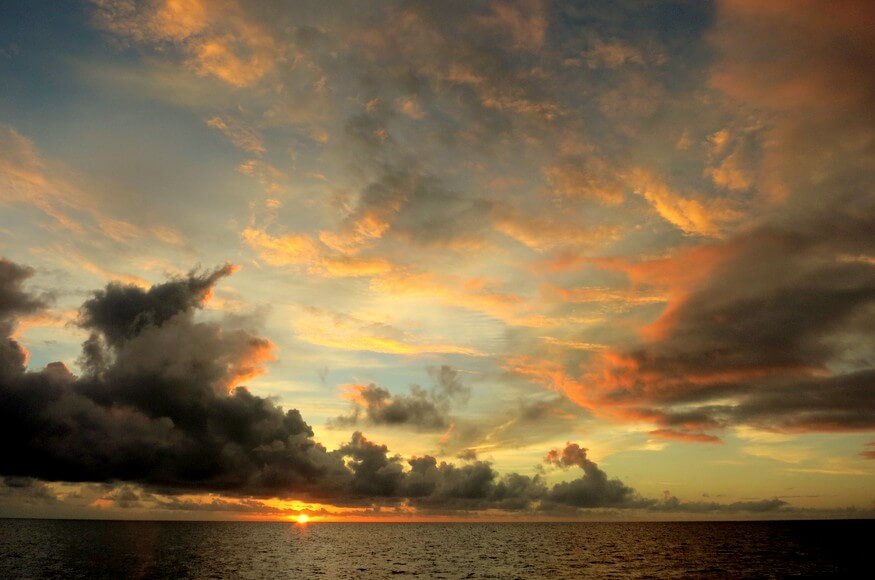 After a “special” afternoon on Spanish Wells, we caught the fast ferry to Nassau. We spent the two-hour boat ride pondering what the heck just happened there. If you’re an anthropologist or sociologist, we hope you go and report back to us. 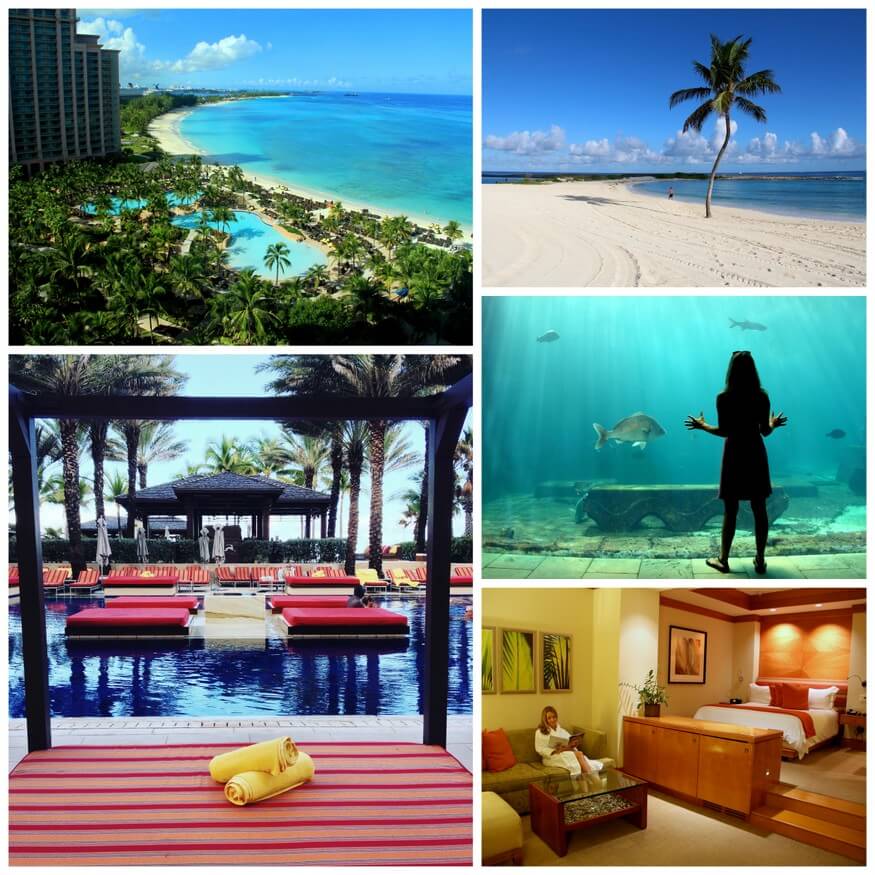 We arrived to Nassau in the evening and came full circle on our Bahamas experience. A world away from the slow-pace-life on Harbour Island and Spanish Wells, Nassau is the hub of the country’s tourism, with the Atlantis resort (the largest in the Caribbean) being their greatest hit. We were invited to stay at their more boutique property, The Cove Atlantis, and roamed around the resort’s manicured beaches, fantastical architecture, and the mind blowing 2.7-million gallon, open-air aquarium–the world’s largest, second only to Earth.

The Real Heart of the Bahamas 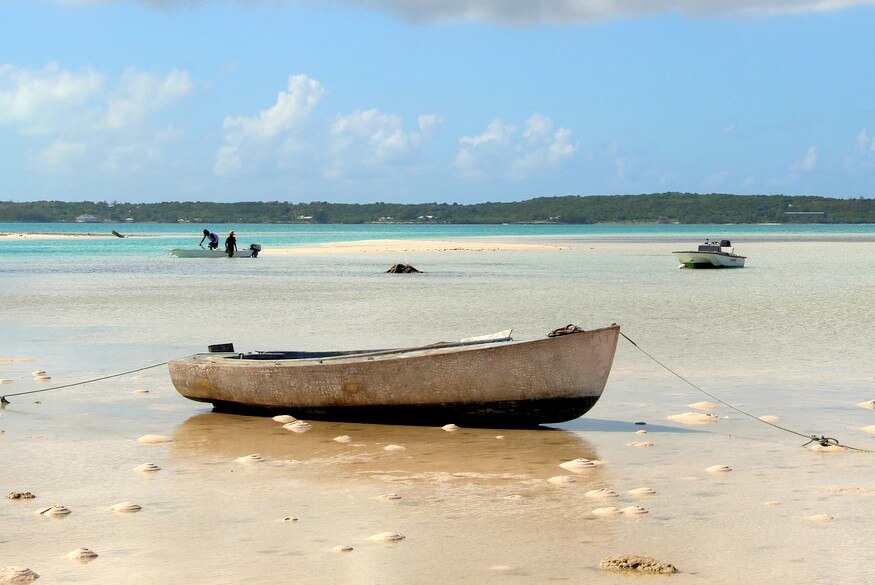 When we talked to the Bahamians we met in Nassau and chatted about our trip to Eleuthera, Spanish Wells, and Harbour Island, they were genuinely excited…“Wow, did you go to the pink sand beaches?!” …“Did you see the waterline between the Atlantic and the Caribbean?” … “Man, you’ve really seen the Bahamas!” Nassau may be the commercial hub but the out-islands have the country’s heart.