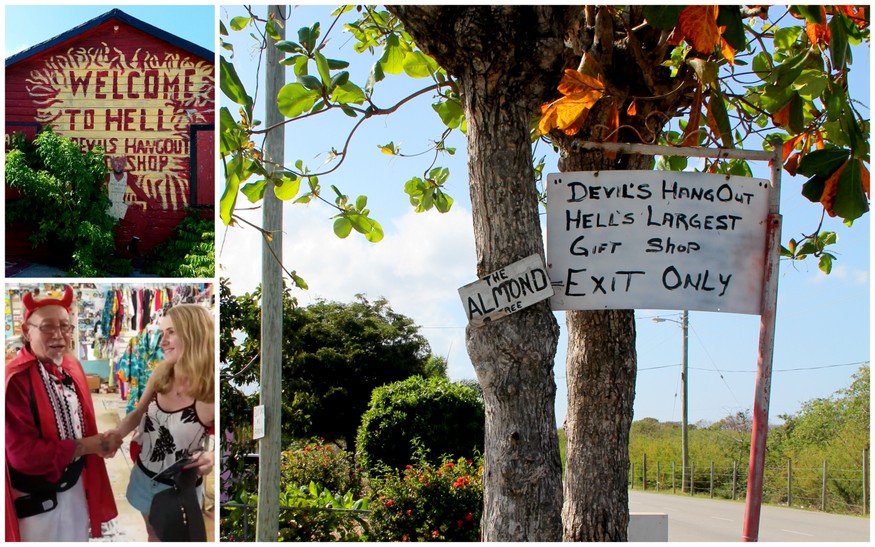 “Where the hell are you from?” said an old Caymanian guy in red horns and a sequin cape. The Cayman Islands is a sophisticated place, but we couldn’t resist a visit to its kitschiest attraction on Hell’s Highway. Inside the Devil’s Hangout, the owner Ivan Farrington chatted us up before his display of flame T-shirts, hot sauces, trinkets emblazoned with “Go to Hell,” and most of the original décor from its 1987 opening. When I told him I was from Los Angeles, it was if I sent him a care-package of comedic material. “City of Angels? They only sell one-way tickets from that place…make yourself comfortable!” Listening to pun after pun, fine-tuned from thirty years of chatting with tourists and still delivered with utmost pride, it was impossible not to fall in love with this man—a local celebrity and embodiment of Caymankind hospitality, as we begin road tripping Grand Cayman.

Missed our first post on the Cayman Islands? Read it here.

The Devil’s Garden in Hell 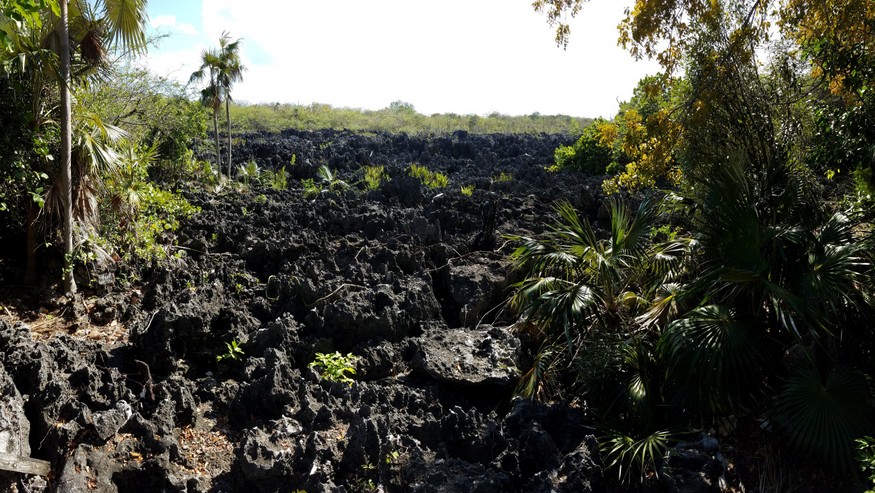 We sent a postcard from Hell, thanked our new friend Satan, and poked around the Devil’s Garden. The area is called Hell for its charred-black ironshore, a jagged and foreboding rockscape. It extends to the fringes of the island for an extra dramatic coastline, especially juxtaposed against Grand Cayman’s soft, white-sand coves. 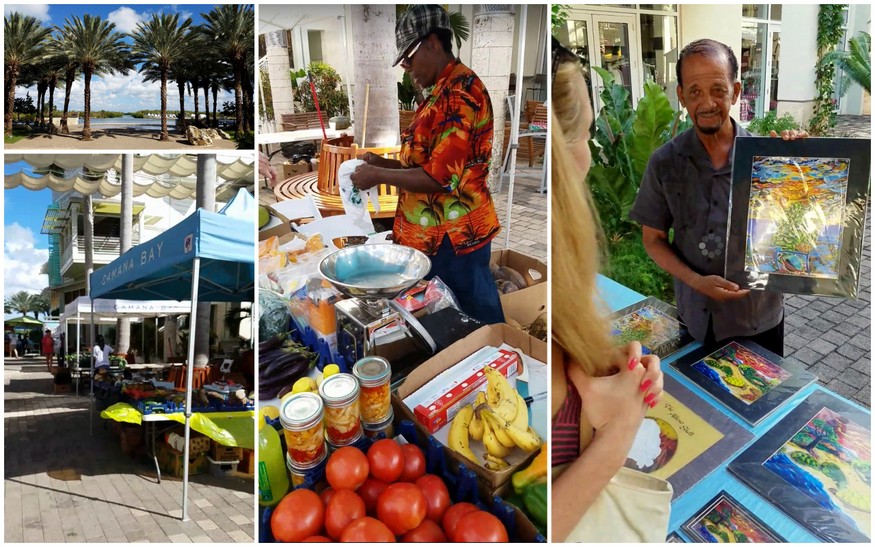 Heading east, our road trip continued past the famous Seven Mile Beach, to lesser-known and local gems of Grand Cayman, like the Camana Bay Farmer’s Market. Each Wednesday (12pm-7pm) this posh shopping boulevard is lined with stalls by Caymanian artisans, bakers, and farmers. We got chatting with a painter named Eugenio and sampled Teresa’s third-generation pepper jelly recipe.
Tip: For farm-to-table foodies, try Brasserie. This sustainable and delish restaurant raises their own chickens, has fisherman on staff, harvests honey, and even has vegetable beds in the dining room. 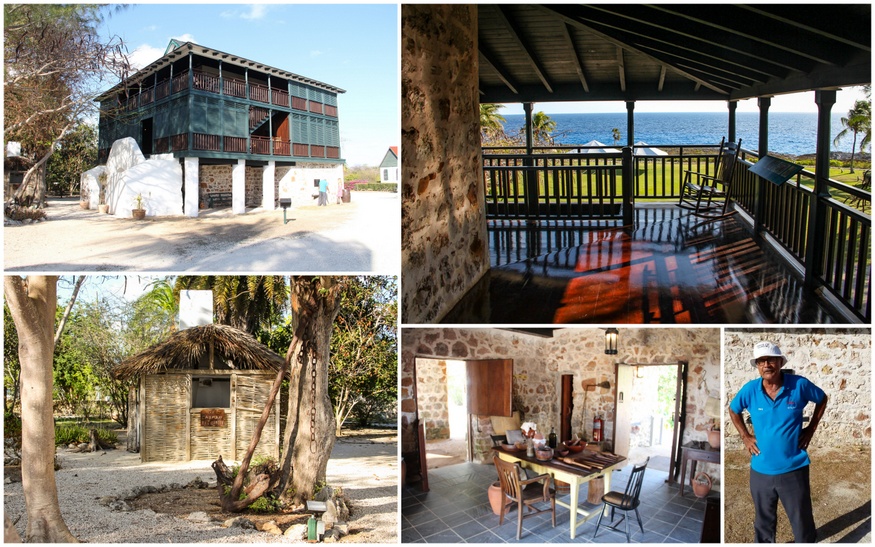 We made our way to the town of Savannah and Pedro St. James, the Cayman Islands’ “birthplace of democracy.” We arrived just as they were closing, but the chief guide, said “It’s okay, I’ll show you around.” We walked the grounds of the 18th-century stone home (the oldest in the Cayman Islands), where the country’s Parliament was established, slavery was abolished, and the pioneering Eden family once lived. It wasn’t until the end of the tour that our guide, Stacey Eden Hurlston, said it was built by his great, great, great, great grandfather! 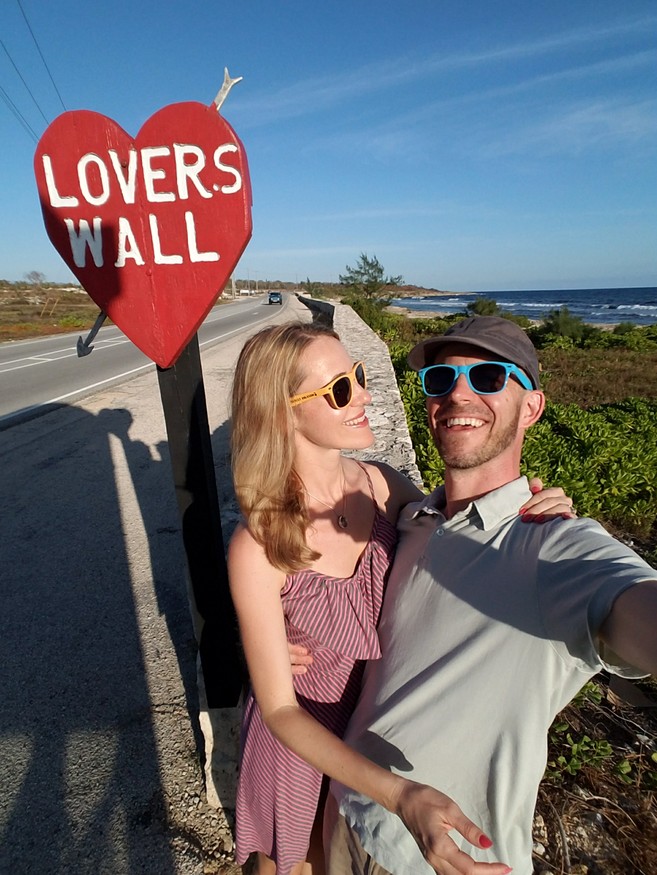 Cruising the Queens Highway (the Cayman Islands is a British Overseas Territory BTW), we reached “The Lovers Wall.” A hand-painted and heart-shaped highway sign need not justify itself to us, but it was curious we couldn’t find any information on its origins. One thing is for certain, whoever stops here must be in love. 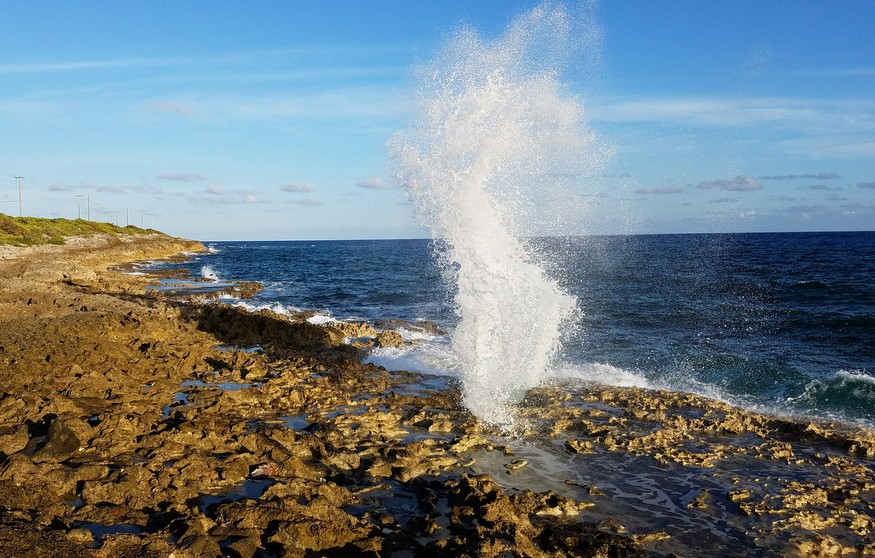 Grand Cayman’s ironshore comes to a head at the Blowholes on the North End, where waves rush under the eroded rock and erupt from the fissures. We watched this natural fountain show, spraying plumes of water fifty feet in the air, for the better part of an hour. Half the fun was trying to predict the biggest waves and see how close we could venture without getting drenched. 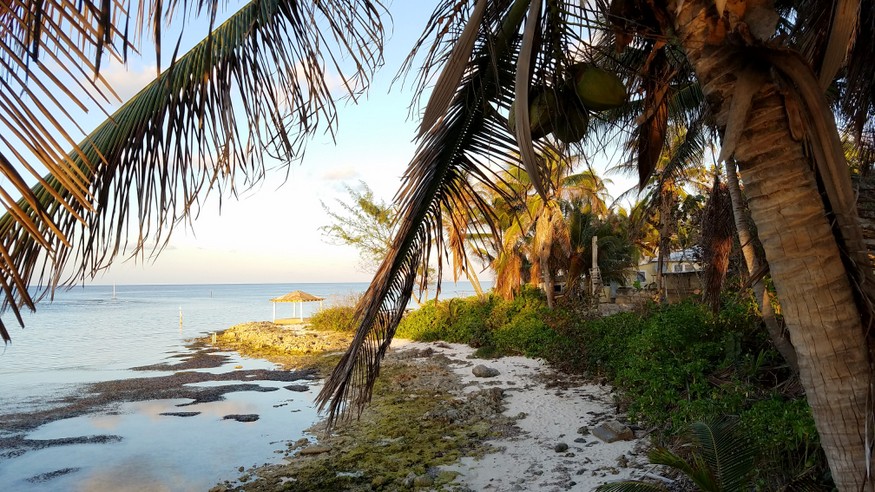 The east half of the island is delightfully quiet, with mostly locals and scuba divers enjoying the beaches. While road tripping Grand Cayman, We pulled over to buy a coconut from a roadside stand and this little palapa captured the chill vibe. 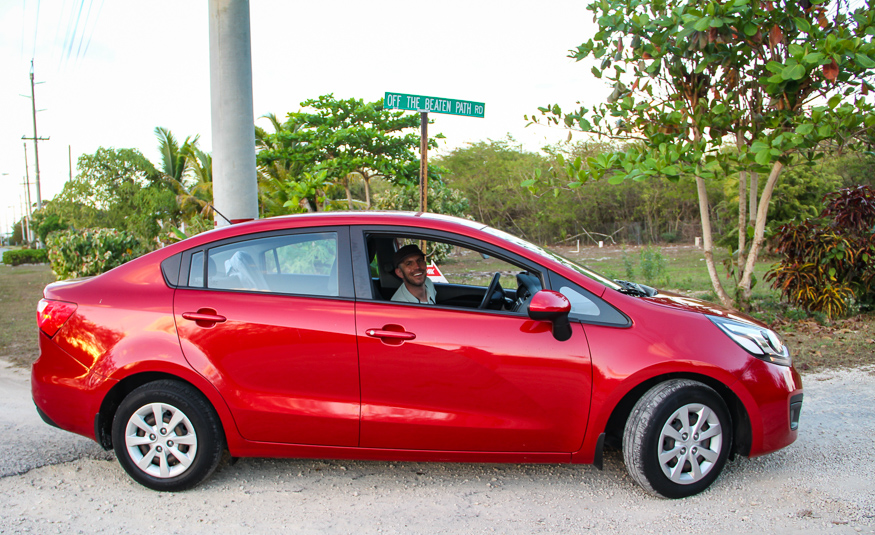 We approached Old Man Bay and the greatest street sign ever! If we could name a road, “Off the Beaten Path” would be it. Funny enough, the island didn’t have street names until a decade ago when the new ambulance system came in (I guess “take a left after the curvy palm tree” wasn’t precise enough). So the government called for submissions from locals, and clever and endearing entries like Uncle Bob Road, Sticky Toffee Lane, Lottery Road, and Snooze Lane all made the map. 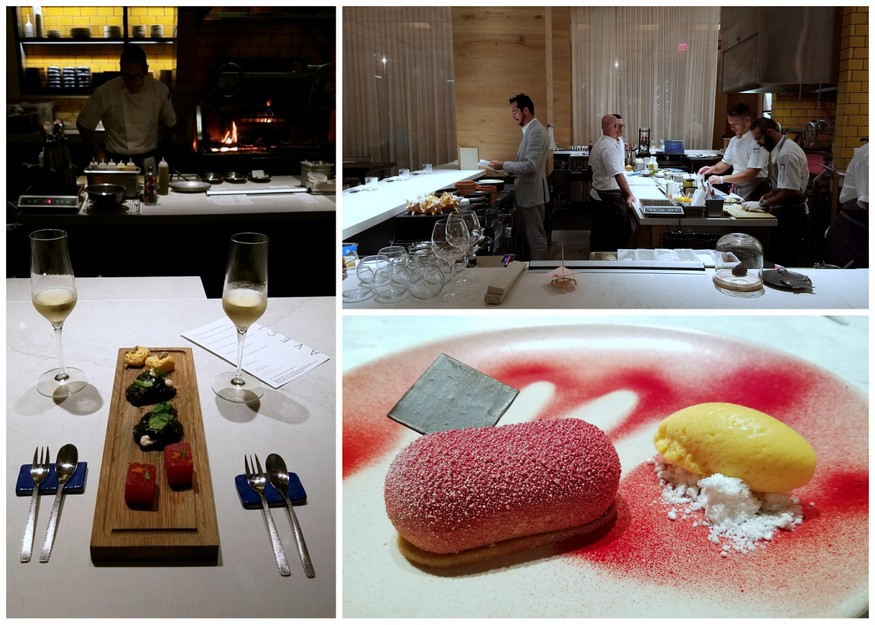 We had dinner reservations back on the westside, so we took the cut-through at Old Man Bay (continue to Rum Point if you can and see ocean-view pics from Blog #1), and made it to the hot new Kimpton Seafire hotel and Avecita restaurant. We bellied up to their exclusive ten-seat chef’s counter for an awe-inspiring culinary performance. Chef Remy—French-born and trained in Spain—crafts a seven-course tasting menu that changes around his creative impulses and the freshest possible ingredients, like Turbot with grilled fennel and Emmental, and Lobster with beetroot and wild mushroom gazpacho. With the support of a sommelier, grill master, saucier, and pastry chef, each course shined with flavor and creativity. (Just look at that dessert?!)

Our Grand Cayman Getaway in Videos 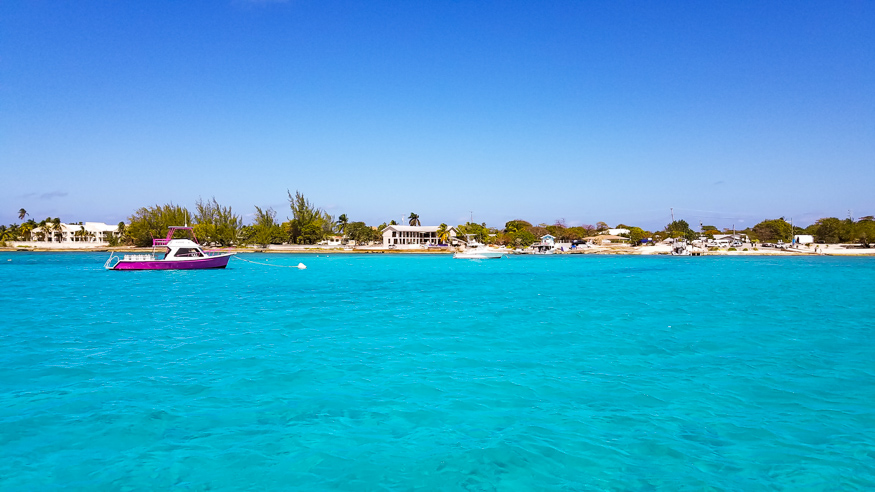 What a trip! We were super impressed with Grand Cayman’s gourmet restaurant scene, scuba diving (no one else has wall dives like this), and the local characters we met in our island wanderings. Unlike many tropical isles, where it’s recommended to stay at an all-inclusive resort, explore with a guide, and only drink bottled water, Grand Cayman is carefree. Safe, clean, straight-forward, and exquisite, it’s the perfect place for those who want an easy foray into Caribbean exploration and just get away from it all. 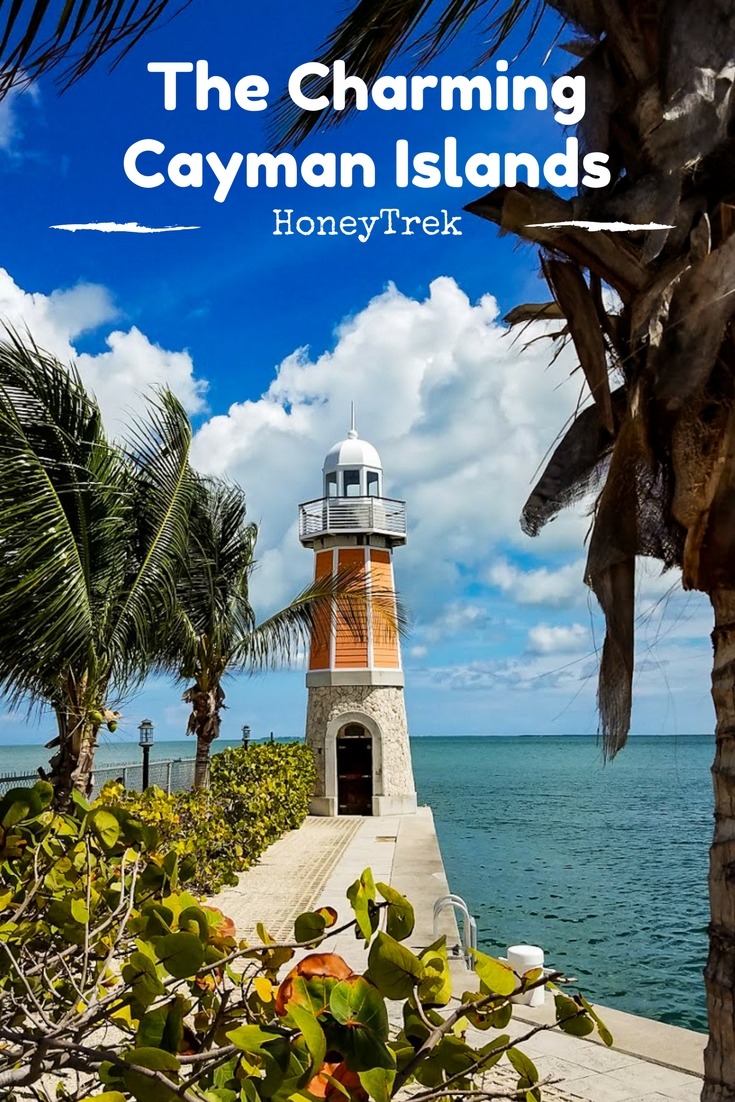 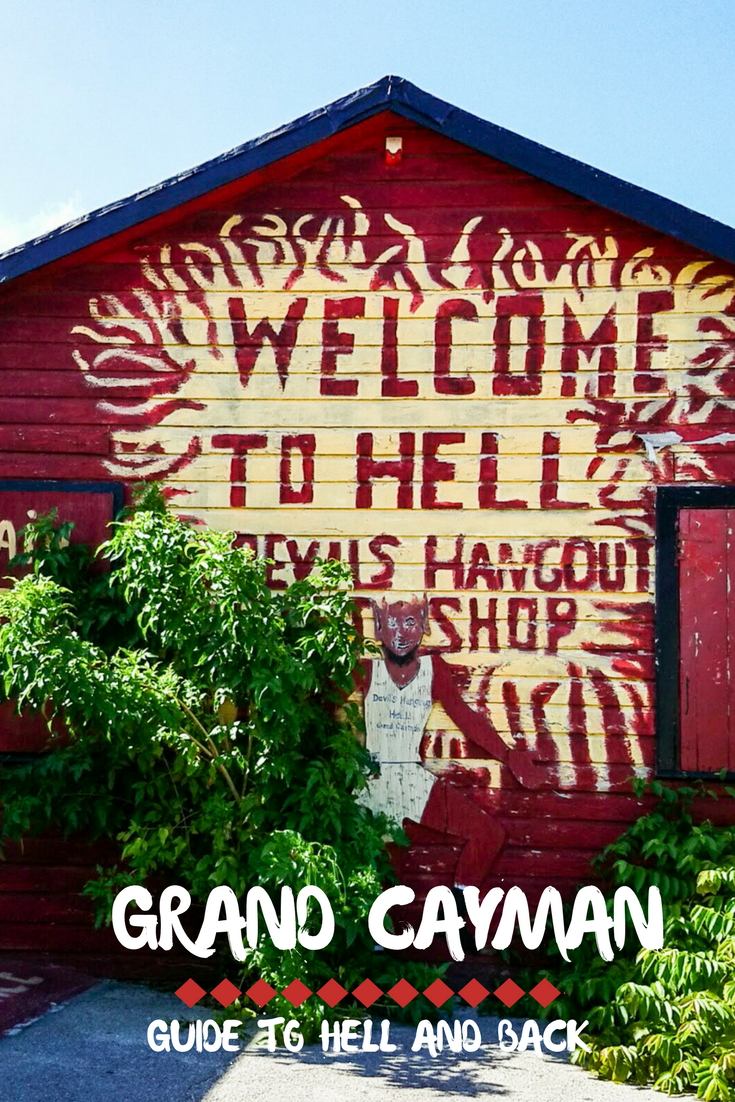 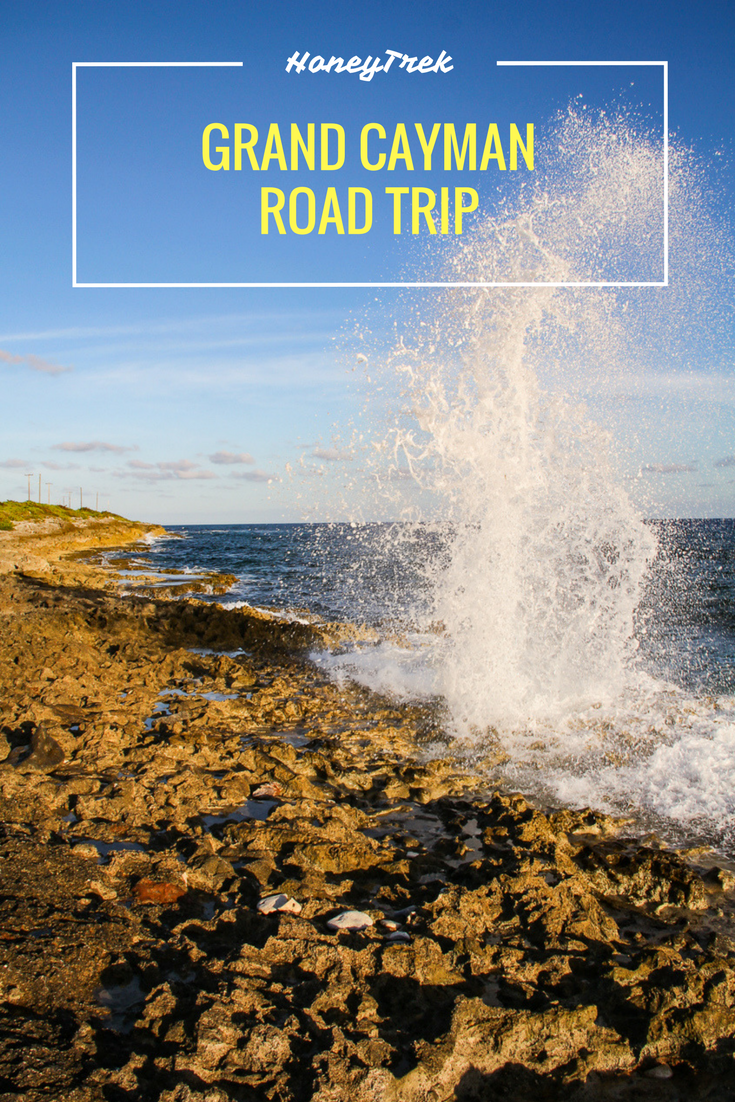 A big thank you to the Cayman Islands Department of Tourism for sponsoring this Grand Cayman Road Trip post.