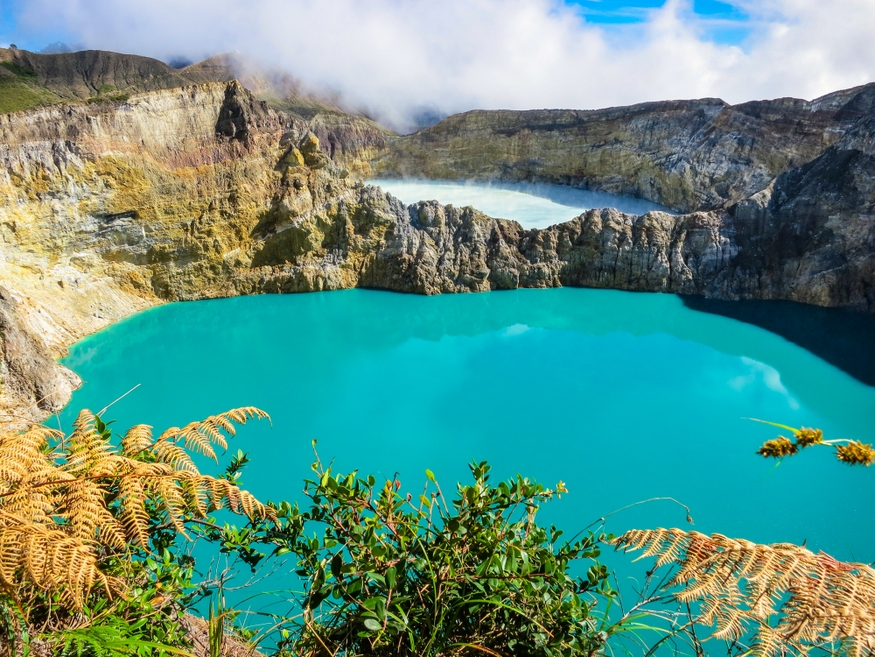 There is a goat on the roof, as we take the local bus between the volcanoes and beaches of Flores, Indonesia. His feet shuffle across the metal with each curve in the jungle-lined road, though no one seems to notice–except the villagers. Not too many people pass through the center of this Nusa Tengarra isle, so a rumble of an engine inspires the locals to stop what they’re doing and giddily wave. We thought it may have been the tap-dancing goat that prompted such big smiles, but this was just the beginning of the warmth we experienced on our 10-day road trip from Bajawa to Kelimutu Volcano and everything else to see in our Flores Indonesia Travel. Some say Flores is like Bali of the 70s and Indonesia’s next big thing (especially with the draw of Komodo’s dragons and diving). With crater lakes that change color, deserted sandy beaches, tribal villages, and some of the friendliest people on Earth, it has all the right ingredients for unforgettable adventures and moments to touch the soul. 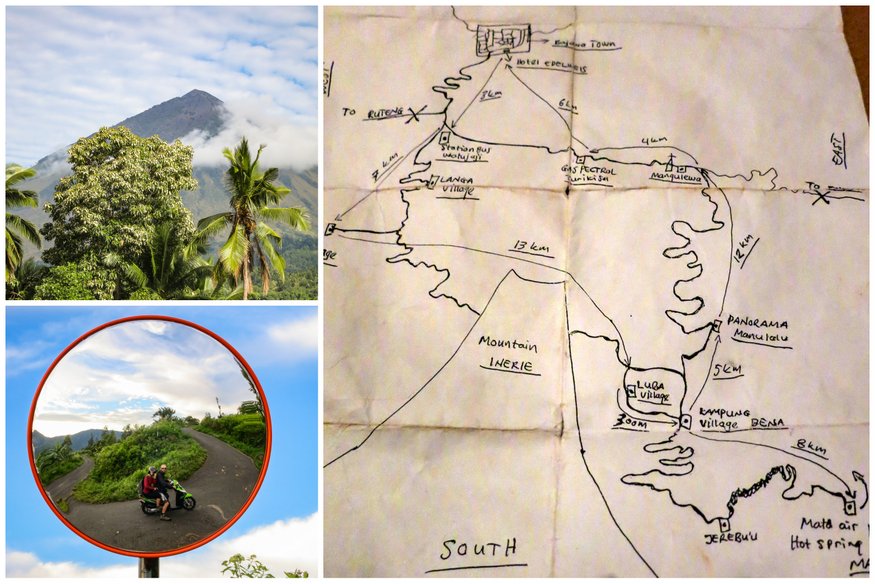 Outside of Bajawa and along the slopes of the Inerie volcano, there are dozens of Ngada villages, practicing a colorful blend of a Catholic-meets-animist traditions. We wanted to discover this world and asked our guest house to help us map-out a road trip (Google Maps and guidebooks haven’t gotten too detailed in these parts). With our Sharpie-drawn map and a vague home address for “Ridho,” a local guy we heard was open to hosting travelers, we hopped on our 150cc motorbike and headed towards Dariwali village and into the unknown. 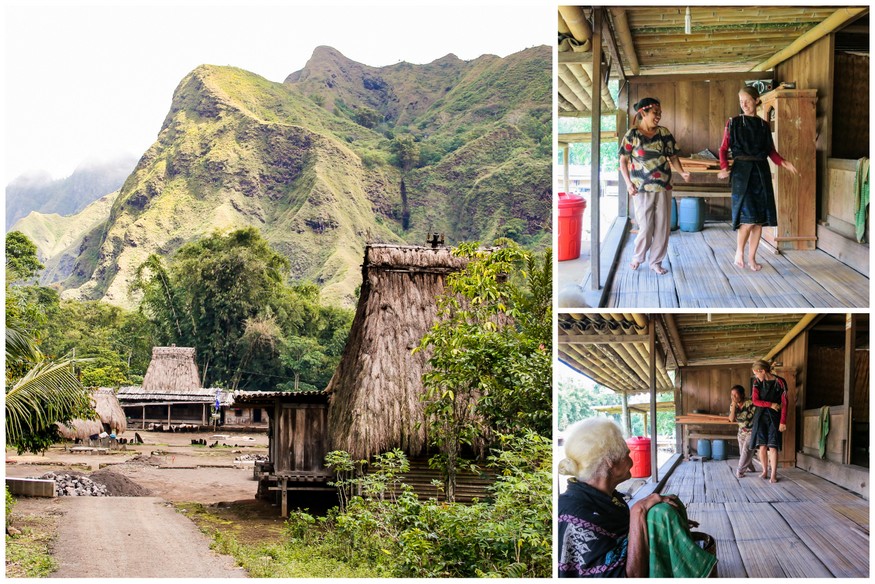 Following the windy roads between sheer mountains and jungle, we reached the village of Bela. We walked around the bamboo homes, using our best Bahasa salutations to greet the villagers. A woman weaving an ikat on her porch motioned us over. She showed us the pattern she was working on, then after a few minutes of charades-style banter, she gave us the universal hand gesture for, “One moment, please.” She went to turn up the music and grab an elaborately embroidered garment for me to try on. I didn’t have the words to ask questions and couldn’t deny a smile as sweet as hers, so the game of dress-up commenced and followed with dance lessons and hysterical laughter. 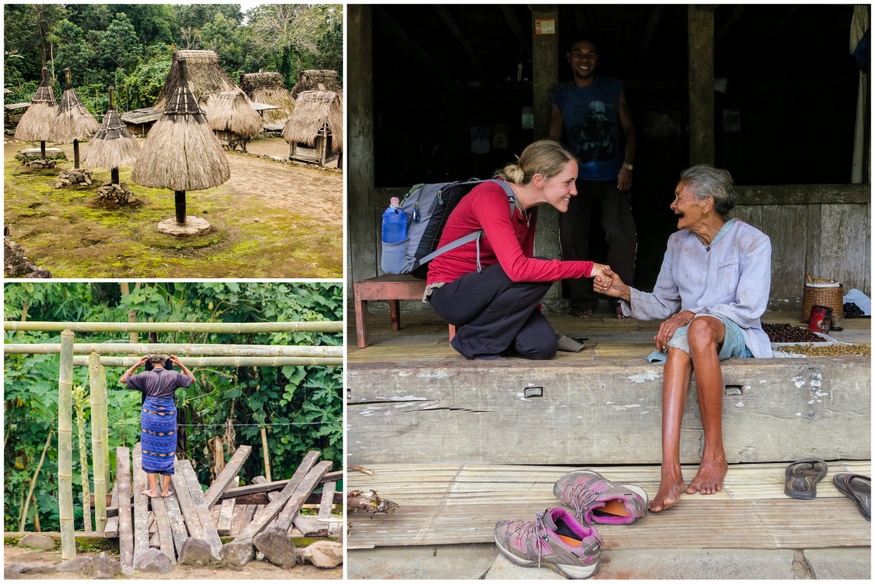 We pulled up to Luba, another village a few clicks down the road, made of lofty thatch-roof homes and centered around stone altars to connect with the supernatural realm. As we sat down to nibble on a granola bar, we were summoned over for a Ramen noodle lunch by the cutest old lady. 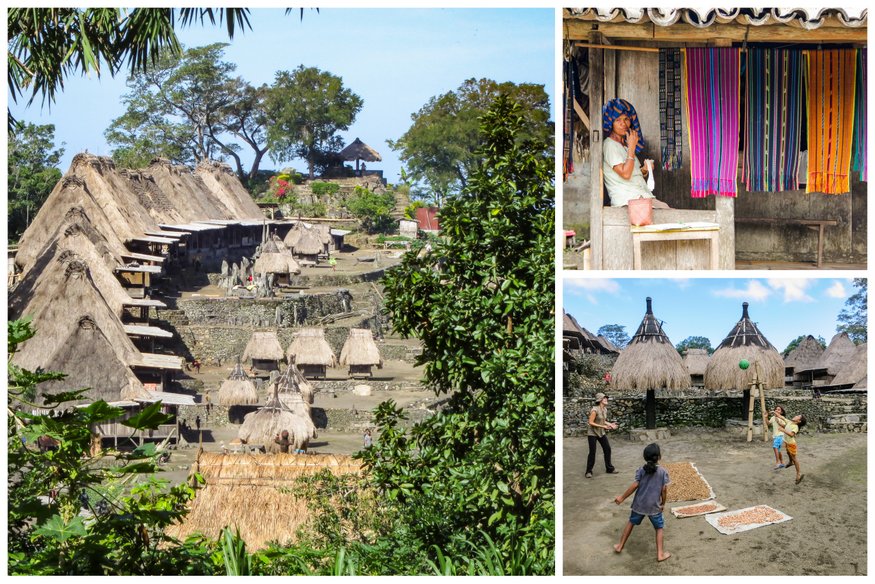 Of all these far-from-touristy villages, Bena has an emerging reputation as the most traditional and picture-perfect Ngada village. Nine clans live in the 49 thatch houses that line a central square, where candlenuts dry in the sun, kids play ball, and harvest sacrifices are made. Stacks of buffalo bones are proudly displayed at their doorstops, to boast the wealth of offerings made to the gods. Woven figurines are perched on the roofs of the clan-elders’ homes (if it’s holding spears, that’s where the grandpas reside). As we strolled, we saw some little girls playing a version of net-less volleyball and couldn’t resist joining in. When language skills have failed us, sports have always been a favorite form of communication. 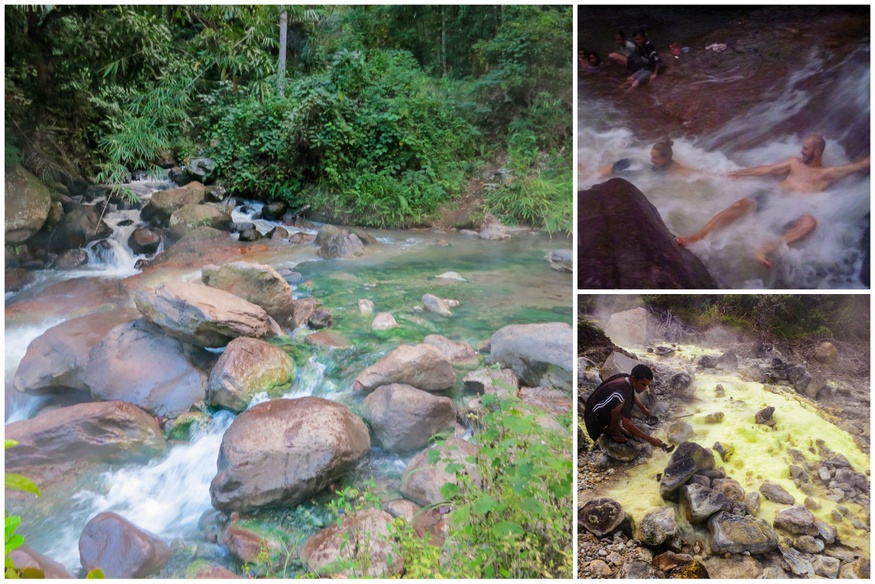 It was getting close to sunset and we still had to find Dariwali village and Ridho, our potential homestay host. We skidded in, and within a few minutes of asking around, his family emerged. They told us (in not so many English words) he’d be back later, but until then, we could join them at the Malanage Hot Springs for their evening bath ritual. We walked through the forest for a few minutes until we saw dozens of people scrubbing down in the steaming waters. I wore a sarong cover-up to blend in with the other lady bathers, but all eyes and smiles were directed at us Yankees…especially as I nearly lost my getup in the raging falls. With volcanic activity in the area, the river doesn’t just run super hot, but in beautiful neon greens. (see above). 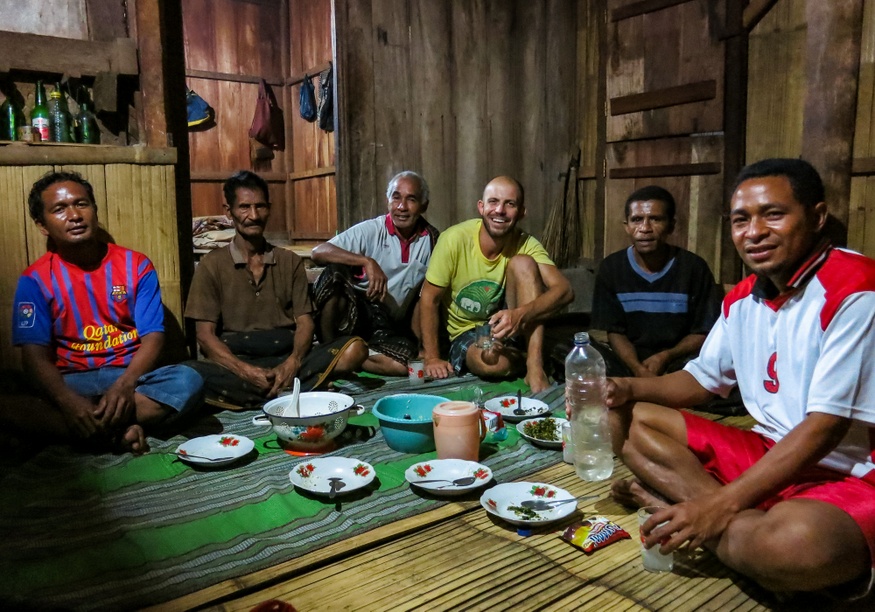 Ridho was back by the time we returned from the hot springs, and low and behold he spoke English! We were getting decently far communicating by patty-cake with the kids and helping the mom prepare food over the fire, but having him there to facilitate a dinner conversation, let us deeper into their world. 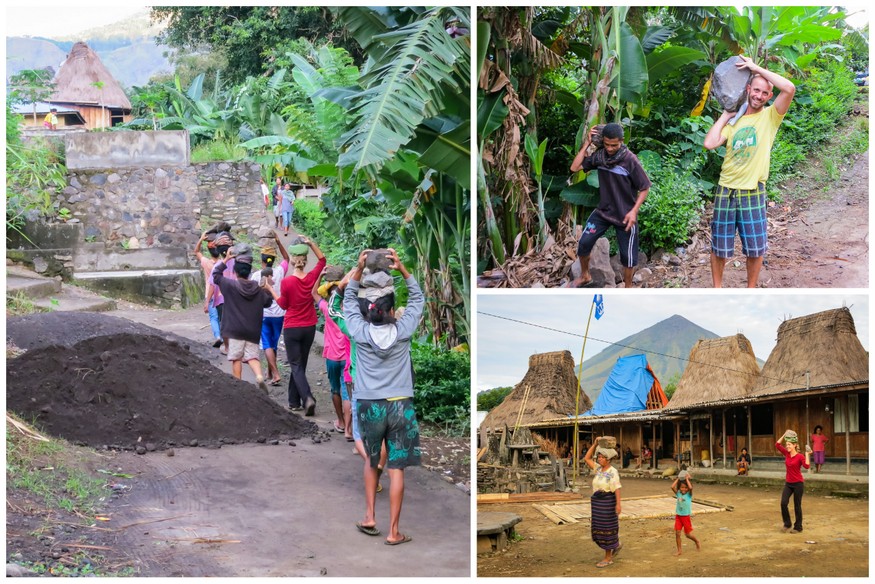 When we woke up the next morning, we saw what seemed to be the entire town marching single file with rocks on their heads. We traced the trail of people to the pile of stones and offered to carry a few. A woman wrapped my head in a cloth and put a 15-pounder on top. Then she grinned at Mike and pointed at the behemoth on the ground. Lifting with the knees, we made a few dozen trips and helped the village build a house for two newlyweds. Gotta love the village mentality and spirit!

Goats on the Roof to Riung 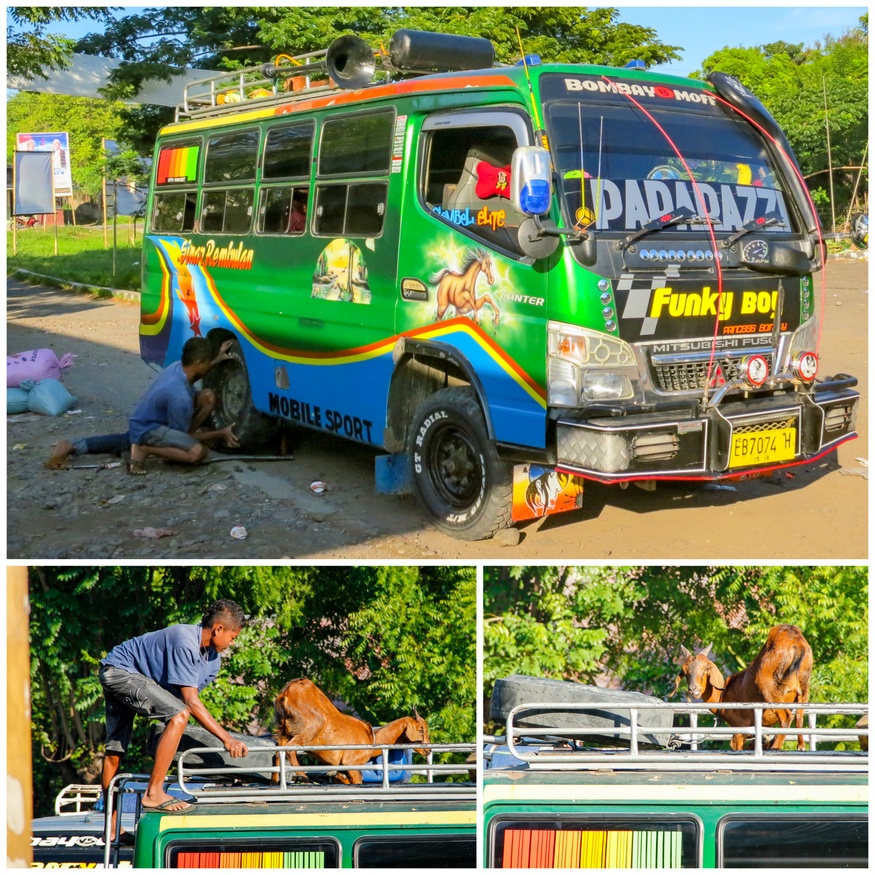 We bid farewell to our new friends and drove back to Bajawa to ditch our motorbike and hop the bus to Riung: home of the 17 Islands National Park. We asked which one was heading that way, and a local guy pointed to the mini-bus with a flat tire and painted in magical ponies and the words “Paparazzi Funky Boy.” (Of course.) Adding to this bus’ zest for life, it was accepting goats as passengers. 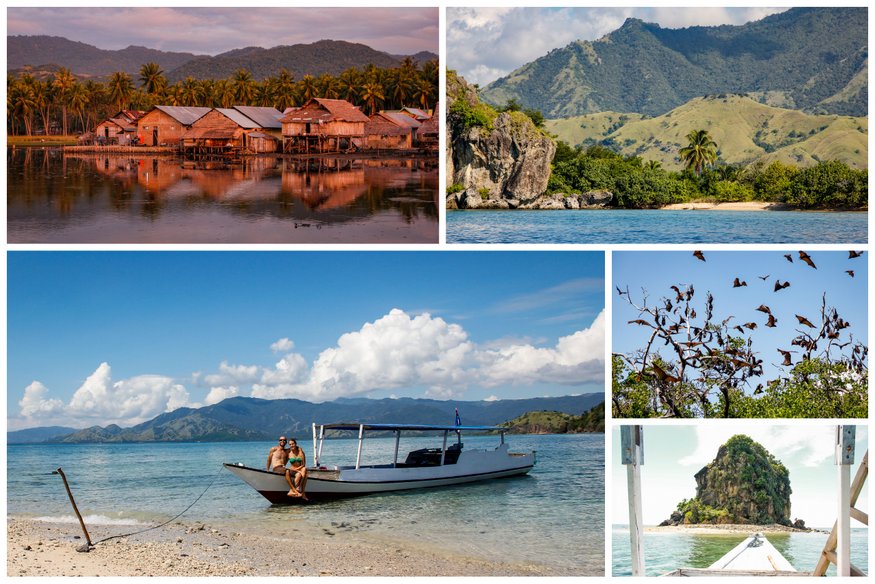 The goat, Funky Boy, and the two of us finally made it to Riung. As we were gathering our bags, a boat captain approached us for a sailing trip to the 17 Islands. To keep costs down and meet a few other travelers, we asked if there was a group trip we could join. After a lot of skirting the question, it came out were the only visitors in town. (We didn’t expect this place to be touristy, but wow!) Off we went on our private island-hopping trip, snorkeling with tropical fish, and spying colonies of bats in the trees. 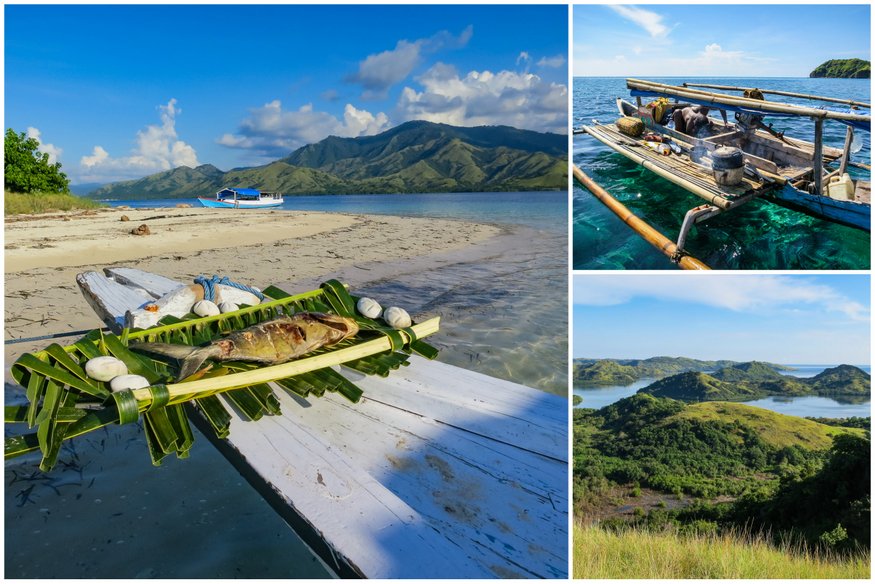 A fisherman in a dug-out-canoe-meets-bamboo-catamaran rowed up, enticing us with his fresh catches. Our captain offered to grill it up for lunch on a deserted isle. Done and done. While he built a barbecue out of sticks and sheer ingenuity, we beach combed for sand dollars and hiked higher for a vantage point over the lush islands. 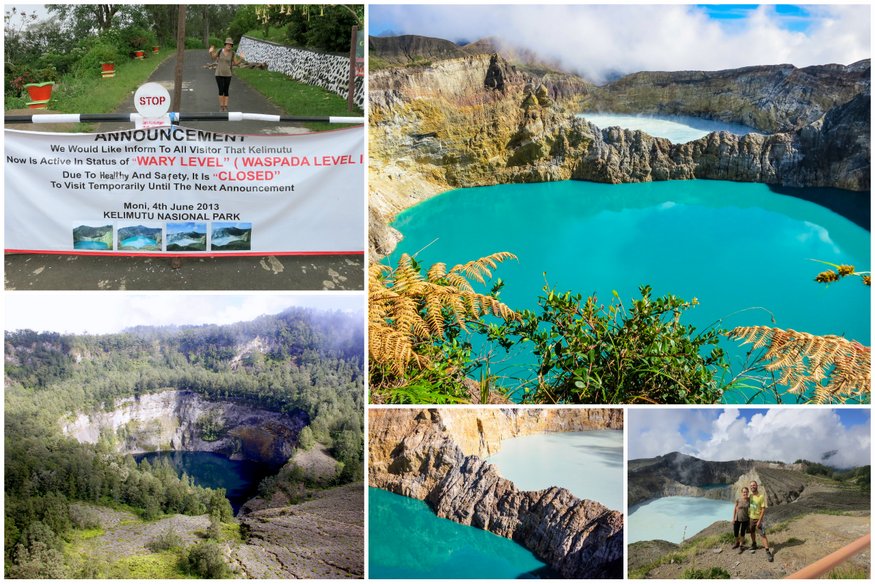 The next major leg on this cross-Flores journey was to Ende to Moni to the color-changing crater lakes of Kelimutu Volcano. Depending on the latest chemical reaction between the water’s minerals and volcanic gases, the triplets will be a unique color combination of brilliant turquoise, forest green, burnt sienna, chocolate brown, or cream white. We made it the volcano…only to find out it was closed due to recent eruptions. Danger be damned, we hiked on in. We reached the rim and couldn’t believe the intensity of colors. We wanted to take it in from every vantage point and kept hiking until we heard, “Hey you! Stop!” from a park ranger. Just as we turned around, he slipped and skidded about ten feet down the crater wall!!! We ran his way to help, but he was already climbing back to the top and fuming with every step. We apologized profusely and managed to smooth things over on our escorted walk back to the path. Phew! 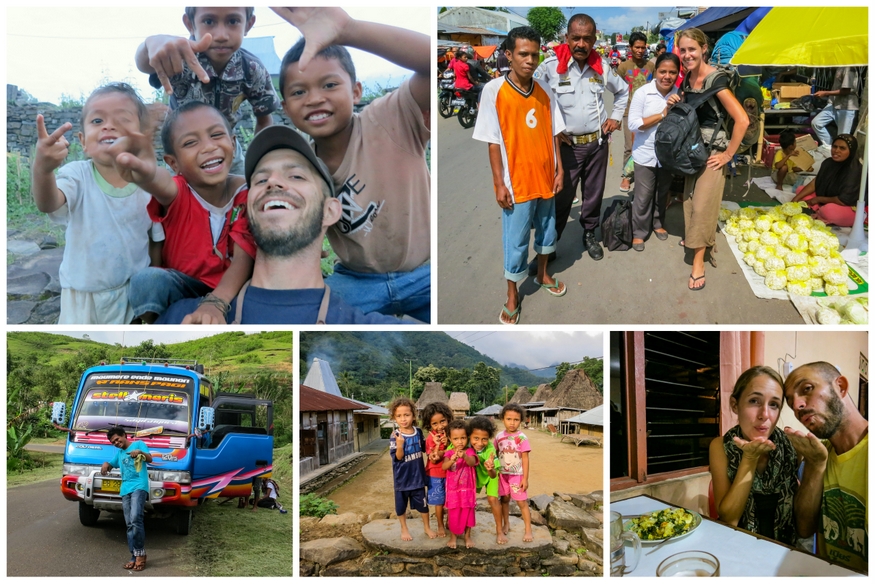 Flores stole our hearts–from the volcanoes to the beaches to hundreds of waves and smiles we received. When asked to name our favorite place in the world, we often dodge or re-frame the question (we love so many places for so many things!). Though press us hard enough, we may just say Flores, Indonesia.