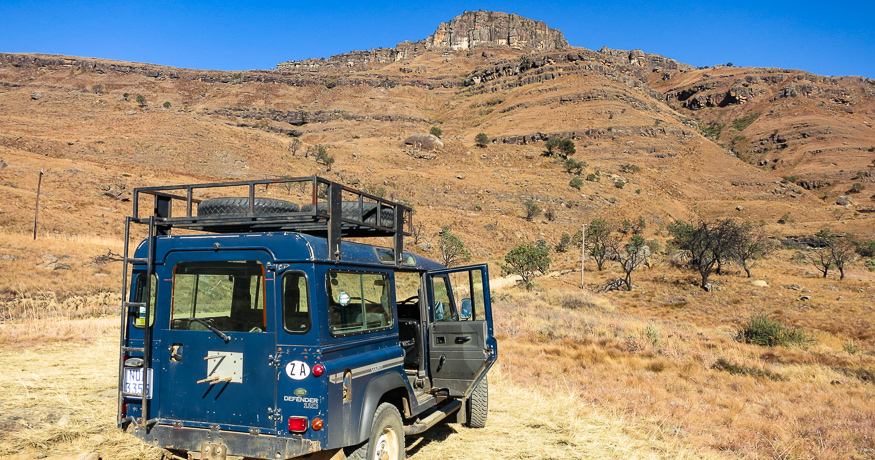 Our South African road trip was originally schemed as a trip from Cape Town to Wine Country, Garden Route, Wild Coast, and up through Swaziland before heading back to Johannesburg. Though after hearing on more than one occasion that Swaziland was “South Africa’s Tijuana” and full of casinos and tourists, we started asking about a country fully engulfed in the middle of South Africa…the Mountain Kingdom of Lesotho. When every South African we met had never been to Lesotho, we knew we had found our next stop! 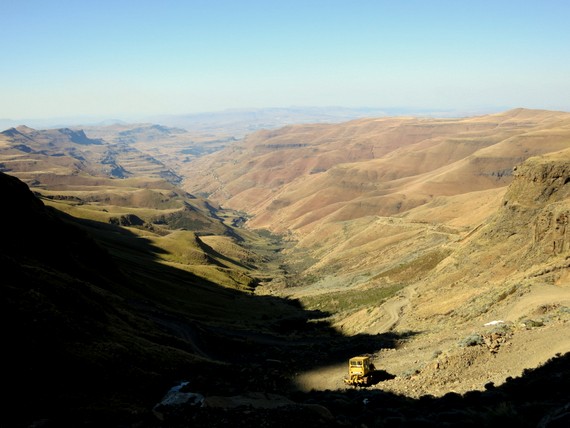 The Sani Pass in the Drakensberg Mountains is a notoriously beautiful way to enter Lesotho so we decided we’d arrive through this high-alpine route. Now, Wikipedia describes the Sani Pass as…”requiring the use of a 4×4 vehicle and above-average driving experience, and it has remains of vehicles that did not succeed in navigating its steep gradients and poor traction surfaces.” Since our Polo Vivo had a ground clearance of approx 8 inches and Avis did not offer the “winch upgrade,” we teamed up with Ian Foster from Drakensburg Adventures for a one-way trip into the Mountain Kingdom.

Reaching the Mountain Kingdom of Lesotho 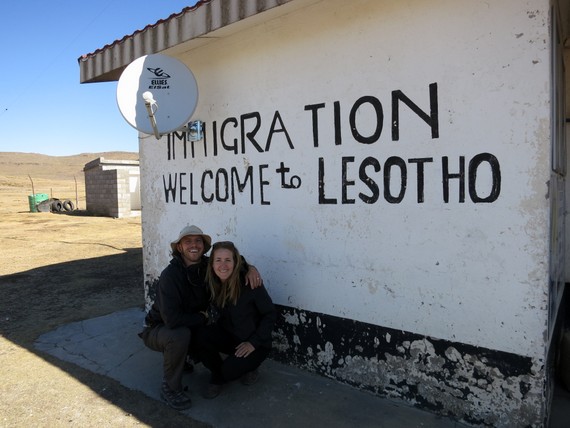 Lesotho’s inhabitants date back to the third century, but its real population growth wasn’t until the early 1800s when the Sotho-Tswana people retreated into the mountainous region for safety from the Boer trekkers, who were aggressively seeking their land. The tribes were able to adapt to the harsh environment of the highlands and neither the Boers or the British could be bothered getting up there to take it from them. Though they were technically a British protectorate and received their independence in 1966, Lesotho has always been a country that marches to the beat of its own drummer. 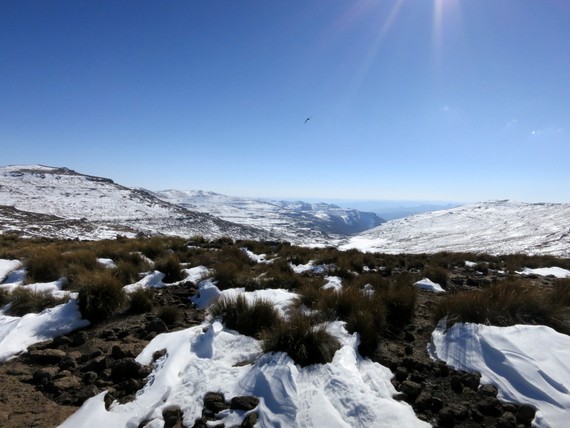 What Lesotho lacks in trees and greenery they make up in altitude. With the lowest point in the entire country lying at a record setting 4,593 feet above sea level, they have their share of snow and cold temperatures (our Lesotho bed came with five blankets per person). 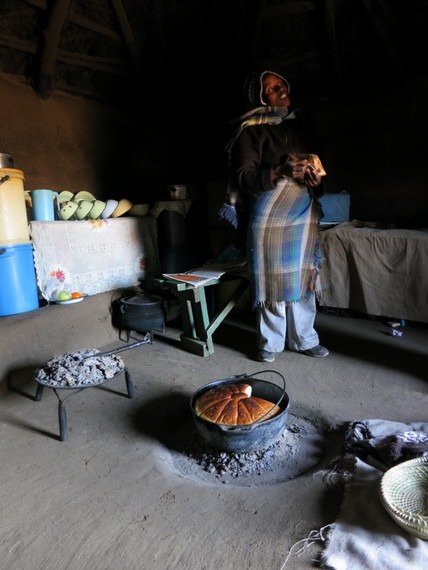 After hiking to a viewpoint of the highest mountain in Lesotho, Thabana Ntlenyana, our crew from Drakensberg Adventures took us to a local baker and brew-master to sample some of the most delicious bread. Outside on the roof we noticed a white flag flying and learned this is one way to communicate with the sheep herders in the vicinity. White flag means this hut has bread and home brewed beer for sale that day. Green flag means vegetables are available in addition. Red flag means all of the above including meat. 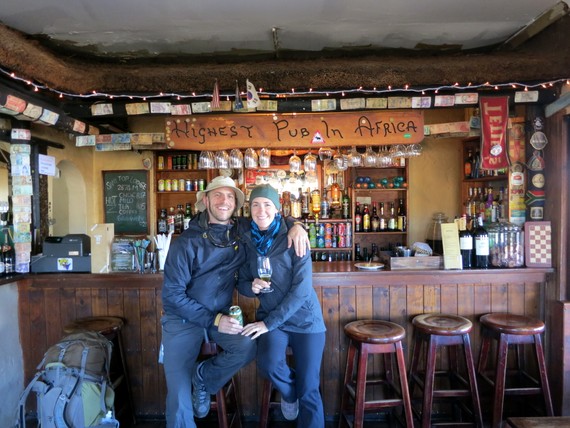 To say farewell to the Drakensberg team and plot our next move through Lesotho, we sat and enjoyed a drink at the highest pub in Africa. Sipping our Maluti beer, we watched the sleek Land Rover slowly zig-zag back down Sani Pass to the comforts of the South African side. Goodbye Drakensburg Adventures, hello HoneyTrek Adventures! 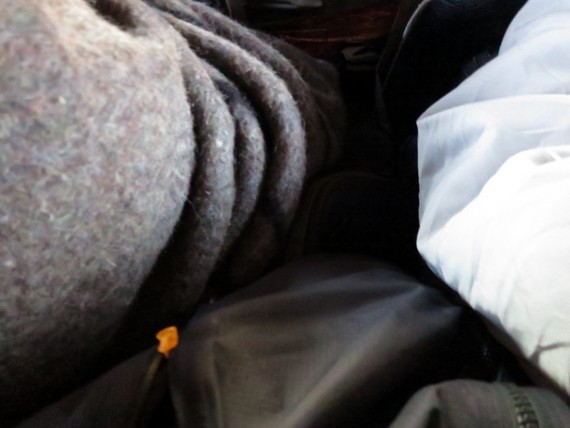 After multiple four-wheel-drive vehicles passed us by, packed beyond the gills, a third slowed down enough for us to ask if we can hitch a lift. When the driver pulled over we looked inside his sardine can and thought, “No way he can fit us….no way.” But before we could spit out those words, our bags were being jammed onto other passengers laps, and we were directed to sit down. Confused, I turned to the driver and to ask where he wanted me to sit and he confirmed that…yes, he was pointing to the four-inch space between two grown men. This photo is of me sitting diagonally on one cheek, the man on my left a local tribesman in a gray blanket and the man on my right another local in a white ski jacket. 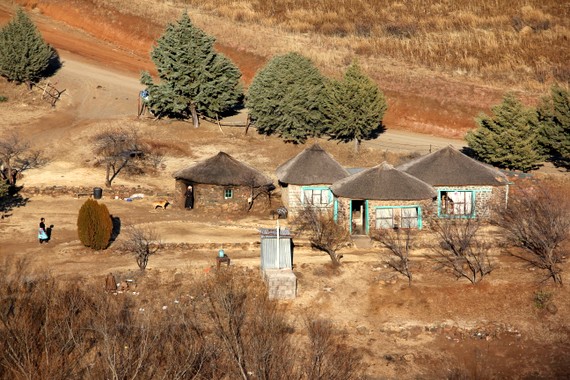 After two hours of sweltering heat inside the mini-van (Tip if you ever travel Africa overland: Snag a seat by a working window because locals never open them) we arrived at our destination, #10 Riverside “Bed & Breakfast.” No running water, no heat, no indoor toilet…no problem! 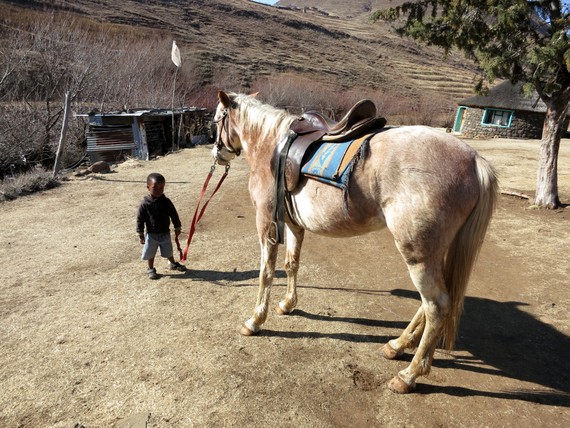 The following day we embarked on a pony trek led by a local Basotho horesman (no, not the young gentleman holding the horse in the photo above, although we did admire this tike’s willingness to get in there and take the reigns). Travel by horse is still one of the most common forms of transit in Lesotho since there are far more trails than roads through the mountains. 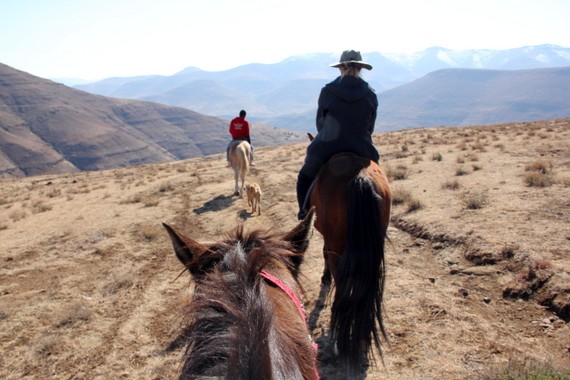 We traversed the potato fields of remote villages, weaving between cows and dogs to catch a glimpse into the life of these fascinating mountain people.

This next experience was so unique and incredible it deserves a blog post all its own. Since we had spent our last dime on the aforementioned pony trek (people say you cannot go to Lesotho and miss this), and Lesotho has barely heard of ATMs (or electricity for that matter), the hitchhiker thumb was our only way to catch a ride back to South Africa. As luck would have it, two gentleman in a Land Rover, who were a little shocked to see us on the side of the road in Lesotho, offered us a lift on two conditions…#1. We didn’t mind sitting in the back of their “dusty truck” (we realized this was the understatement of the year, when three days later when we were still finding dirt in our ears and nose) and #2. That we wouldn’t mind if we all stopped for tea and a snack at an upcoming vista point. 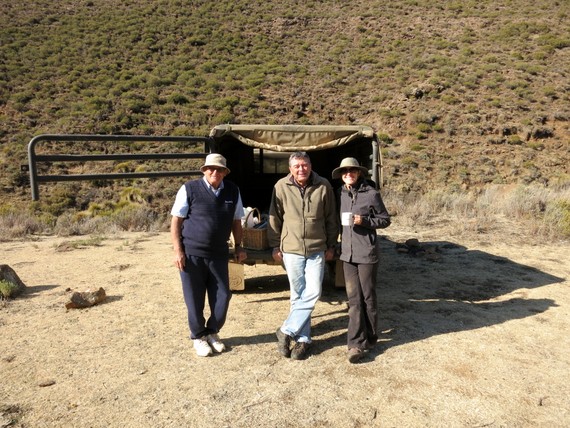 Jokey and Brian were two of the nicest people we could have ever encountered on the side of the road. Aside from the lift all the way back to South Africa and the tea and crumpet rest stops, they invited us to stay with them for the night in Underburg. It was quite informative hanging out with an older generation who have spent most of their lives as the beneficiaries of Apartheid, and while we didn’t agree with their views all the time we wouldn’t trade that learning experience for the world.

Our trip to Lesotho was an adventure to say the least. If you have the chance to go—do it! But if you like warmth and comfort you may want to consider a day trip.