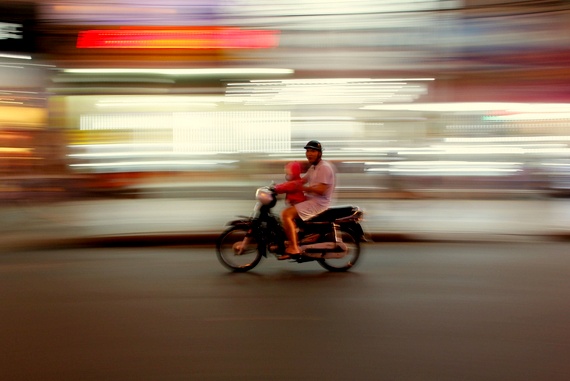 It feels a little strange to be an American in Saigon…whether it’s a guilty complex about the Vietnam War, the landmark reminders of our defeat, or just seeing this fabled city in the flesh. As the largest metropolis in the country and one that was heavily bombed, it is not the prettiest place but with some fascinating sites and a little local guidance, it’s a place we won’t soon forget. 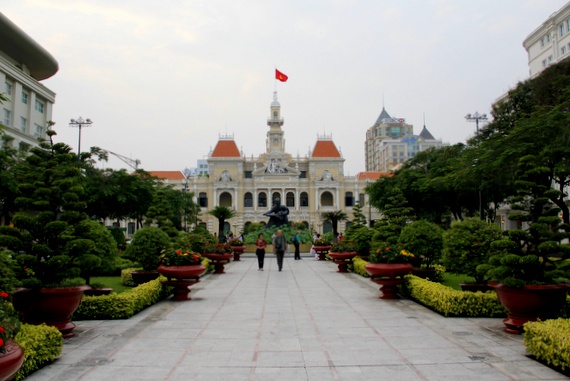 The heart of Ho Chi Minh City (HCMC) is in the Dong Khoi area where the French colonial architecture prevails in the Vietnamese government buildings, parks, and storefronts. Here is City Hall with its prominent statue of Ho Chi Minh—the leader responsible for expelling the French and founding the communist revolution in northern Vietnam. When anti-communist Saigon fell in 1975, the city was renamed after him. 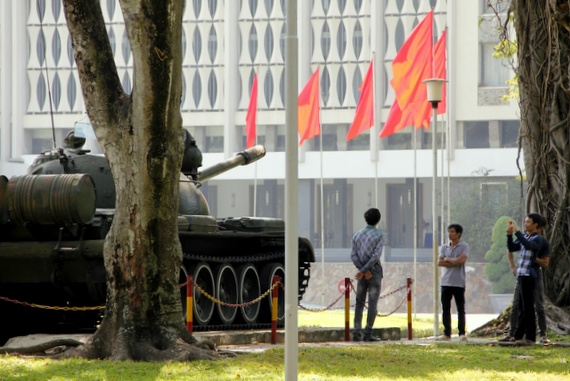 Reminders of the Vietnam War (FYI the Vietnamese call it the “American War”) abound in HCMC with the eeriest example being the tanks at the Reunification Palace. On April 30, 1975 North Vietnamese Army tanks crashed through the gates of the former Presidential Palace, marking the South’s surrender to the North. The tanks are still sitting on the front lawn. 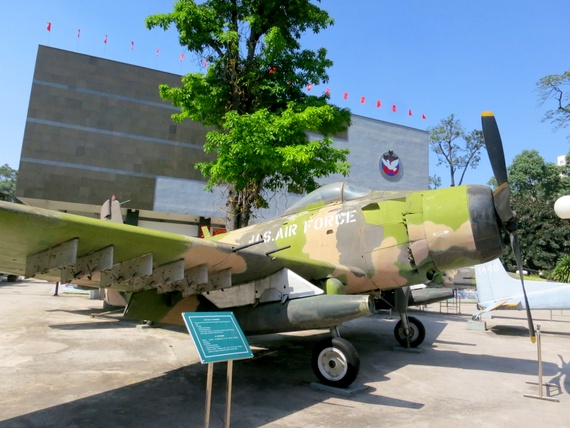 Then the most painful reminder had to be the War Remnants Museum. It documents the atrocities of the “American War” with captured U.S. war planes on display, models of torture chambers, gruesome photography of Agent Orange victims and plenty more to graphically outline the U.S’s various wrongdoings. While it is true that America did horrific things during the war and probably shouldn’t have been there at all, the displays were brutally propagandist to the point of absurdity. For instance: The “Historical Truths Room,” never once mentions that was a conflict between Northern and Southern Vietnam–until the U.S. came. It’s a twisted place, but worth a visit for greater perspective. 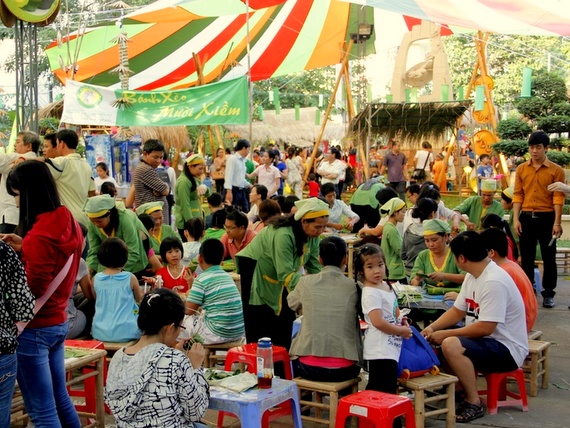 After feeling fairly disturbed by the War Remnants Museum, we were happy to find this neighborhood cultural fair. In a city that seems to be taken over by mobile phone and motorbike repair shops, it was nice to see kids learning about traditional dances, crafts, and foods. We learned how to make banana leaf rice balls and ate all the spicy noodles we could find. 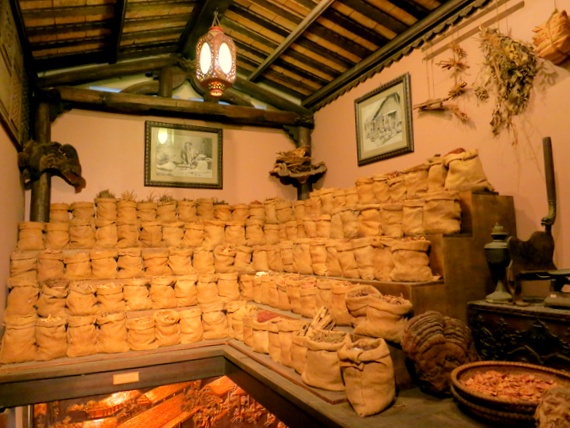 Our favorite stop in HCMC was the Museum of Vietnamese Traditional Medicine. This six-story building renovated with architectural elements from historic apothecaries around the country, traces the history of Vietnamese natural remedies from 2nd century to present. Your ticket comes with an English-speaking guide who walks you through the 18 rooms and explains the various ways plants have been used to heal the body. 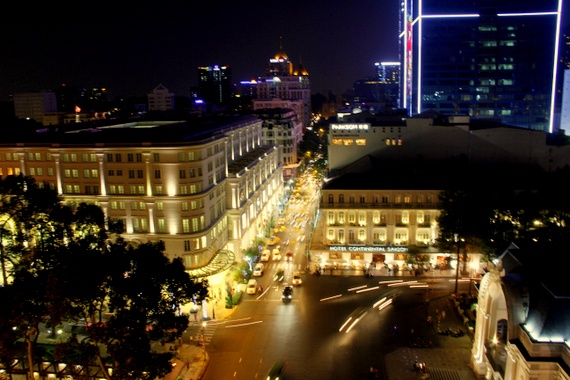 Though our work with Honeymoons.com, we met Esther, a PR rep based in HCMC who had her finger on the pulse of city’s hottest and most classic spots. Our first stop was the famous rooftop bar of the Caravelle Hotel. In the 1960s & 70s, The Caravelle housed the Saigon bureaus of NBC, ABC and CBS. It was beloved by journalists for its bulletproof glass, air conditioning, and cocktails. Supposedly the war reporters would survey the scene from their bar stools, head down if things got interesting, and return by happy hour to compare notes. 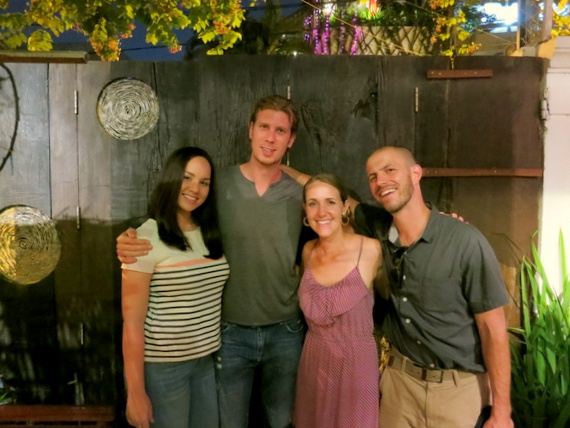 Esther and her boyfriend Fred took us to their favorite swanky restaurant, May or locally known as the Architect’s House. This modern-home-turned-restaurant is a series of inviting rooms serving French-Vietnamese fusion and their food is excellent! For a night cap, we went to the funky lawn-chair bars along the Saigon river to watch the night cruises go by. 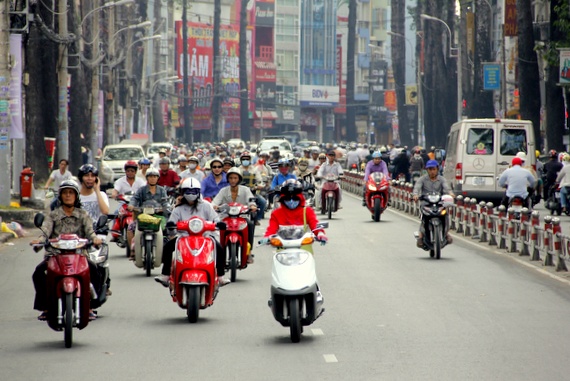 If we could describe Ho Chi Minh City in one word it would be caffeinated. Everything has a charged energy from the motos that whiz by to the sassy people to the rate at which the city is growing…it’s a place on the move.

10 thoughts on “The Fabled Saigon” 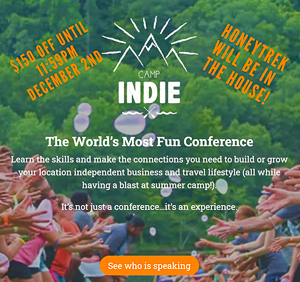