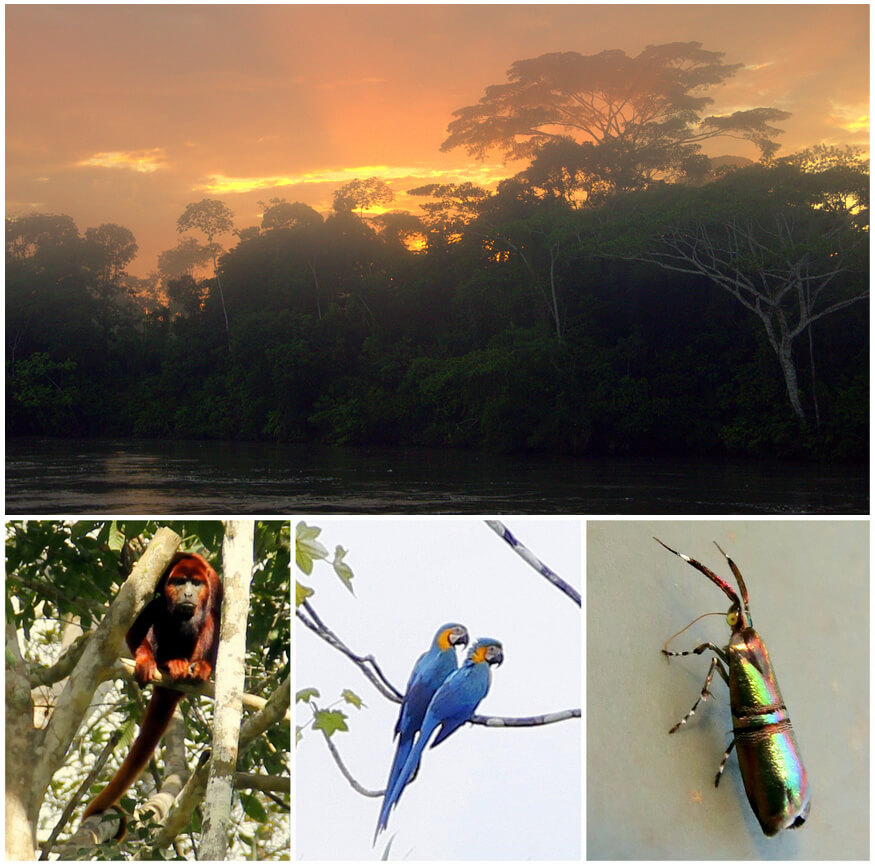 The Amazon is where the HoneyTrek began, nearly four years ago (can you believe it?). It’s where we cast off our 9-to-5 nets, and walked into the jungle towards our new nomadic lives. It holds a special place in our heart, so much so, that we were a little nervous to go back. Could the Ecuadorian Amazon compare to our life-changing five days in the Brazilian Amazon? When it comes to flora and fauna, you bet. Yasuni National Park is said to be most bio-diverse place on the planet and it showed. Toucans, pink dolphins, sloths, howler monkeys, surreal bugs and exotic flowers, all welcomed us back to the jungle and created more unforgettable Amazonian memories.

Our Wild Ride to Coca

Torrential rains had just swept through eastern Ecuador, causing countless landslides and road closings along our 300km route from Baños to Coca. We were 75km into the journey and learned that the main bridge connecting this part of the country had collapsed and bus service to Coca was stopped…indefinitely. We needed to be in Coca the following morning for our Amazon tour so we whipped up Plan B: Take a local bus on the other side of the river and catch a boat to a town passed the busted bridge. Brilliant, right? Well, four hours later, the boats had stopped running and we had no choice but to go to the end of the line: a four-house evangelical town in the middle of NOWHERE. Standing in the dark on the side of a dirt road with 100km left in our journey, we were starting to lose hope for our Amazon trip. Then we saw bobbing headlights and a dust cloud approaching. Our thumbs instinctively floated up to the hitchhiking position. “Hola! A donde va?,” says the smiley man leaning over his son. Those signs were enough for us to entrust him with our lives on the pot-holed, unlit roads into the abyss. This story could honestly continue as its own blog, between him singing at the top of his lungs to 1980s Ecuadorian pop and swerving in front of oncoming traffic to warn them about the terrible roads, but long story short…we made it to Coca!

The town of Coca is the gateway to mainland Ecuador’s largest national park but its biggest industry is not tourism…it’s oil. Pulling away from the docks of this industrial town, passing oil rigs and flames of burning natural gas, we thought, “Is this really happening to most bio-diverse place on the planet?” It’s definitely a disturbing reality but the good news is, with staunch support from the international community, Yasuni National Park is currently protected from drilling. As our boat continued up the Napo River, the roads and rigs disappeared and the jungle reclaimed the river-banks with willows, cecropia, strangler figs, and sable trees, with tropical birds on patrol. 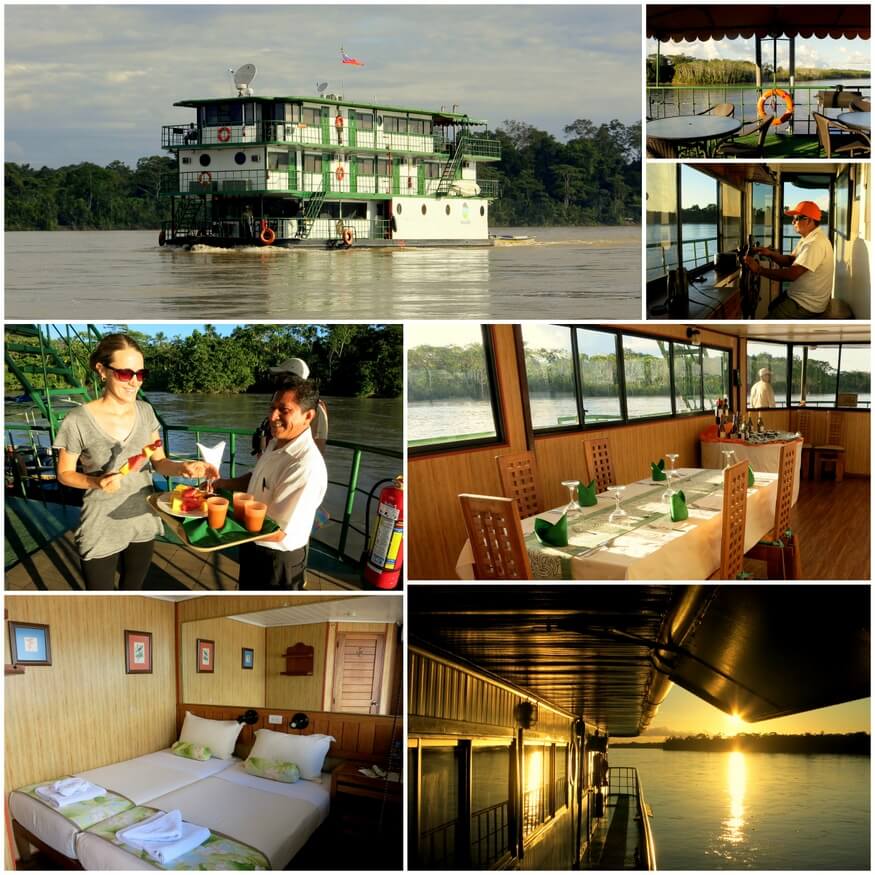 The Amazon is 7 million sq km with virtually no roads, so we figured we better get exploring by boat. Advantage Travel is the only company that offers river cruises in the area so we signed up for their Manatee Amazon Explorer 4-day trip. The 14-cabin boat is run like a boutique hotel, with charming rooms, gourmet meals, and a very attentive staff. Our ship captain navigated the Napo river (with just a compass and eyeballing the water–no computers!) while our naturalist guide Diego would take us down the tributaries in a powered canoe for daily excursions. 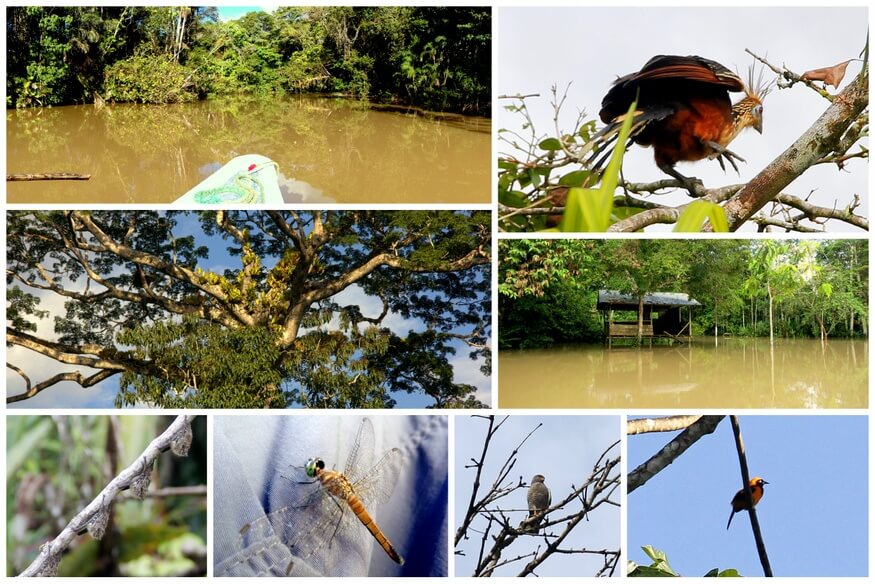 After a night of stargazing constellations from the Northern and Southern Hemisphere (you can see both in Ecuador!), we woke up for our excursion through the floating forests of the Pañayacu river. As we slow-cruised, our senses heightened for the symphony of singing birds, humming insects and rustling monkeys. 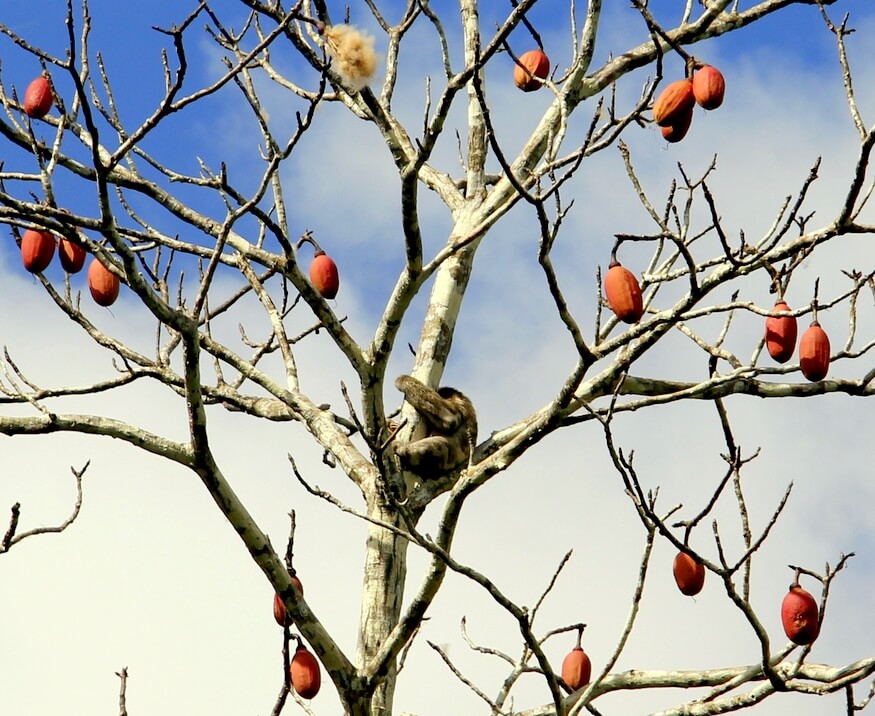 Among the lush green forest, the Java Cotton Trees with their red pods stood out like a Christmas display. Their fruits pop when ripe and leave their wispy insides wafting like feathers in the breeze. As if this tree wasn’t beautiful enough…there was a sloth sleeping the center! Living up to its name, El Perezoso which literally means “the lazy,” didn’t move an inch, but sure looked cute hugging the tree. 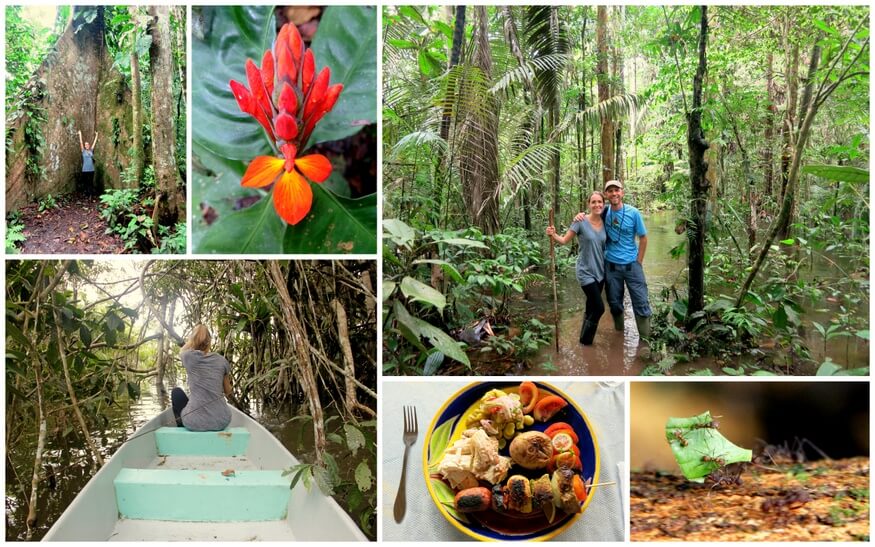 We reached Piranha Lake (eek!) and a camp on one the few pieces of dry land. A local guide took us on a swampy forest hike to teach us about the different trees’ uses, medicinal properties, and the habitats they create. Followed by a delicious BBQ lunch and self-guided kayak through the maze of mangroves, it was a perfect afternoon. 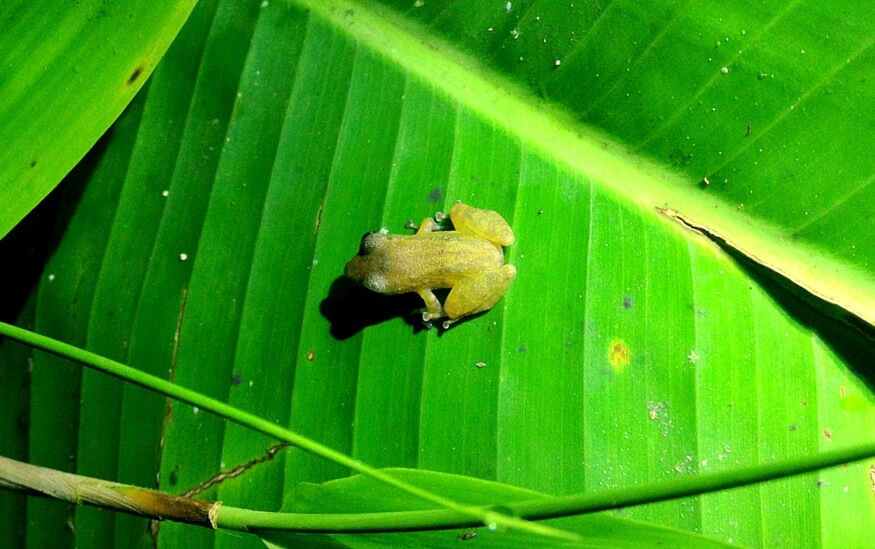 With so many nocturnal animals in the Amazon, night walks are a must. Walking slowly with a flashlight allowed us to focus on the rainforest’s micro wonders. Over 90% of the species in the Amazon are insects, plus there are 1,000 species of frogs, and more bats in Yasuni than any other jungle. 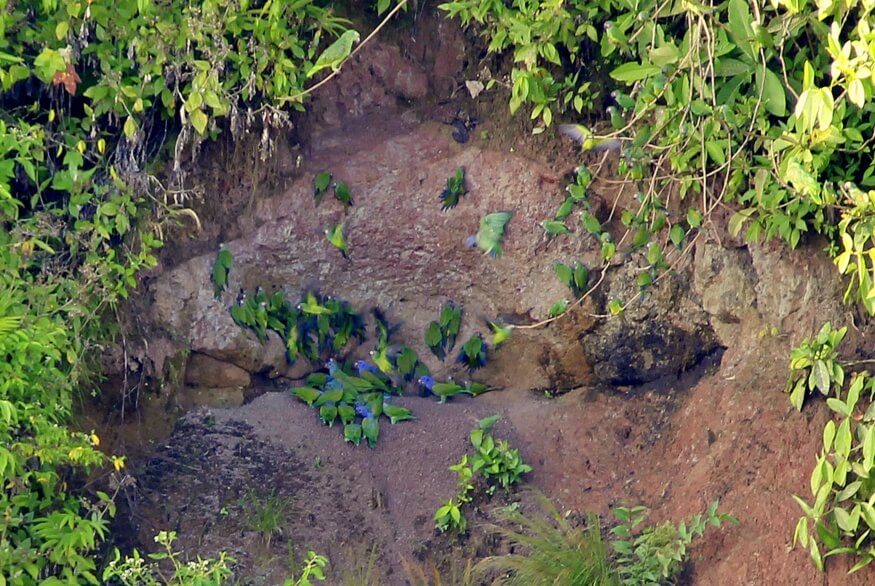 The next day, we woke up before dawn to watch parrots feed at Yasuni’s famous clay licks. Being so far from the Pacific and the Atlantic Ocean, birds in the western Amazon need to find a new source of salt and the area’s clay cliffs are the perfect feeding ground for their sodium intake and to neutralize the toxins in their seed diet. Hundreds of yellow crowned amazon parrots, cobalt wing parakeets, and blue headed parrots, slowly gathered in the surrounding trees. Then one made its move to the clay lick. Once a few proved it was safe, the feeding frenzy began. We watched them peck at the cliffs, flapping their vibrant wings, and squawking like crazy. 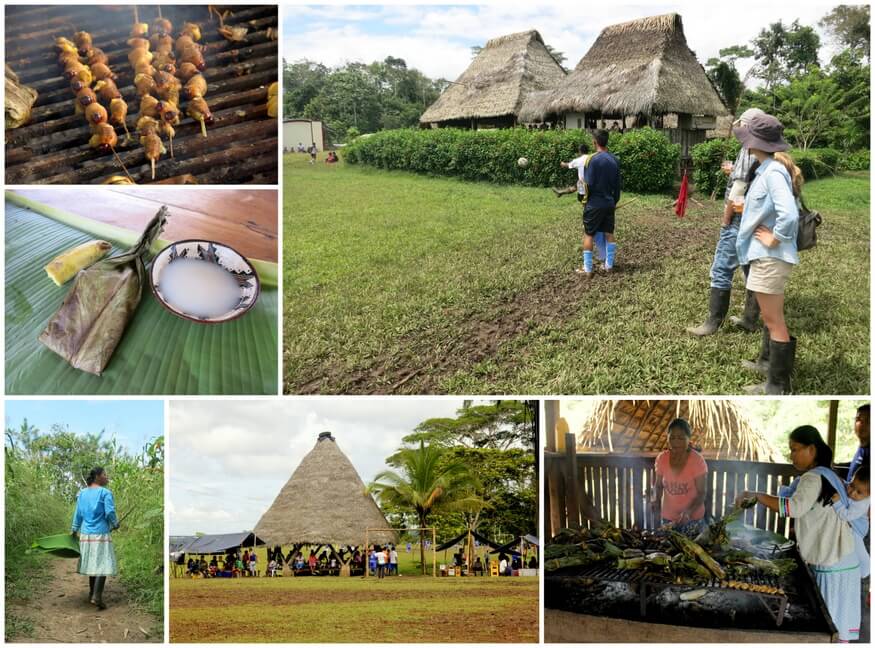 After a breakfast feast of our own, we went to visit a Kichwa village on Sani Island. This indigenous village is a part of a greater community project to help preserve local traditions and bring revenue to its people. We got a tour of the area, then were served traditional dishes like tilapia stuffed with hearts of palm, millet beer, and fat grubs (freaky…yet delish!). We’ll admit the tour felt a little touristy, but the soccer (aka mud ball) tournament going on was a taste of real Kichwa life. We joined the families around the pitch, cheering on the players, drinking Pilsener, and enjoying a sunny Sunday in the park. 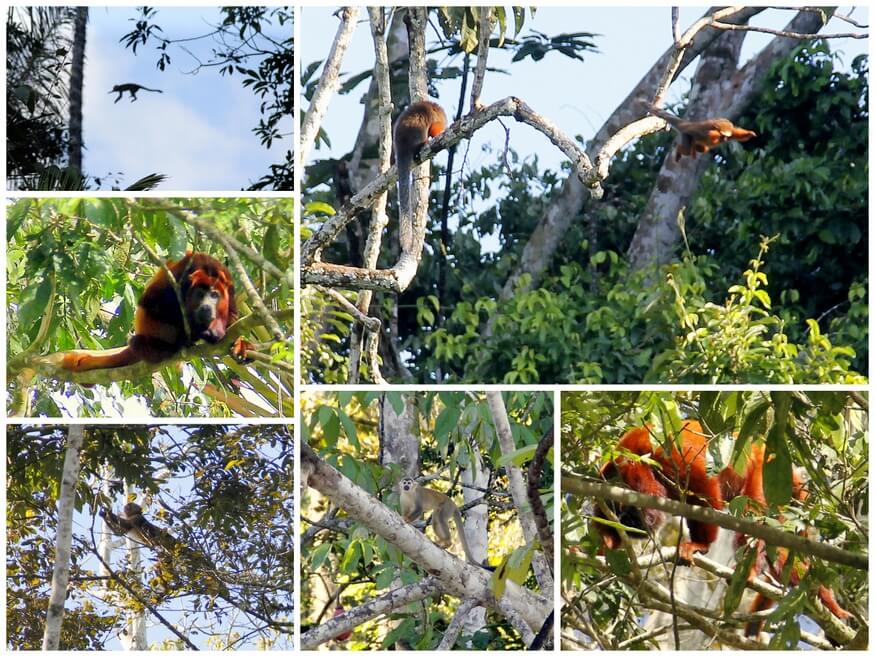 For our last river excursion, we headed down the Ineillama river for what turned out to be a veritable primate circus. We heard an angry squawk, and turned to see monkeys literally hurling themselves out of trees. Apparently a mother Ornate Hawk-eagle was protecting her nest and her wrath sent them flying for cover. Monkey after monkey, leapt as far as 40-feet down to the next tree, then bounced on branches until they caught their balance. Just when we thought we’d seen enough monkey mania for the day, we saw a dozen more red howlers and squirrel monkeys. 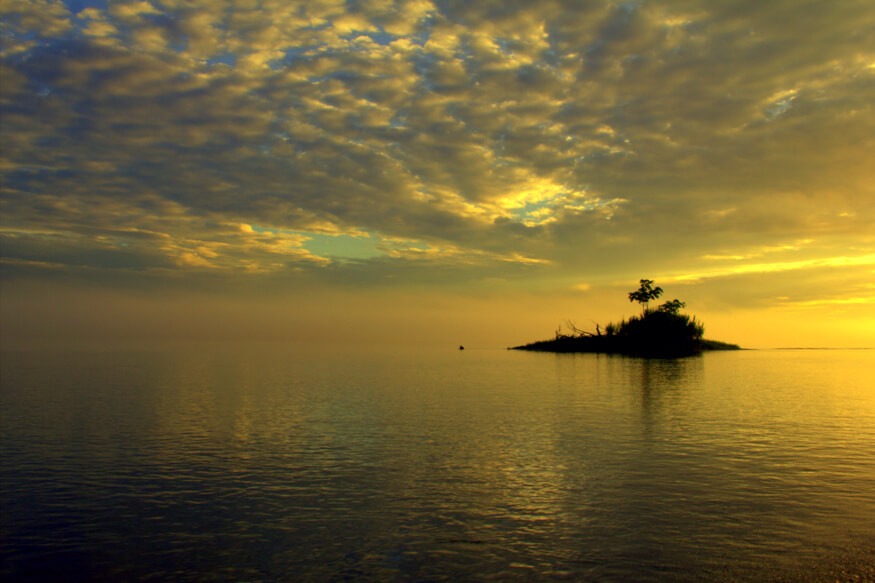 We said farewell to the awesome Manatee crew and zipped back to Coca on the power canoe. The two-hour ride had my mind recounting all our incredible wildlife encounters—diving pink dolphins, leaping monkeys, majestic macaws…then the sight of the oil rigs reminded me how fragile it all was. Tourism has its own evils, but in the case of Yasuni, the more visitors they get, the more reasons Ecuador has to protect it. This was our second trip to the Amazon, and we can’t wait to go back.

9 thoughts on “The Most Biodiverse Place on Earth”