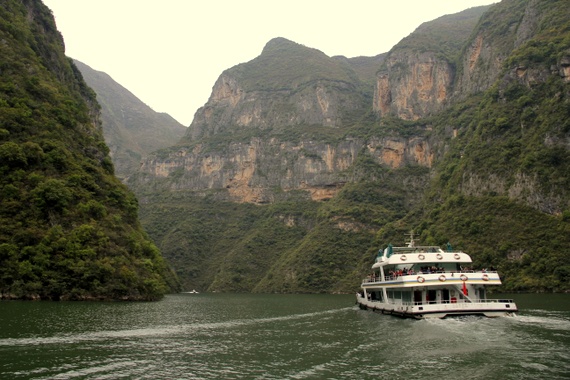 The Yangtze is the third longest river in the world, stretching 6,400km across China, so we knew we had to cruise it. And when I say cruise, I mean a triple-decker boat, complete with one karaoke parlor, four electronic mahjong tables, 500 Chinese tourists, and two westerners (us). We joined the tour to experience the beauty of the Three Gorges and history along this ancient trade route, but it turned out that spending time with the passengers was at least half the fun. 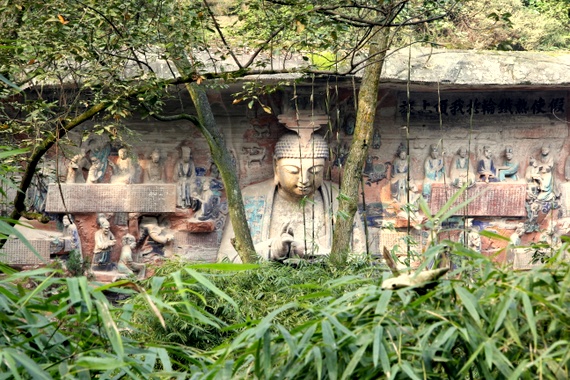 On the way to the port of Chongqing, we made a stop at Dazu, home to 50,000 Buddhist cliff carvings. Sixteen km northeast of the city is the most impressive batch of sculptures–10,000 of them with some over 50-feet tall–etched into every rock niche and cave. 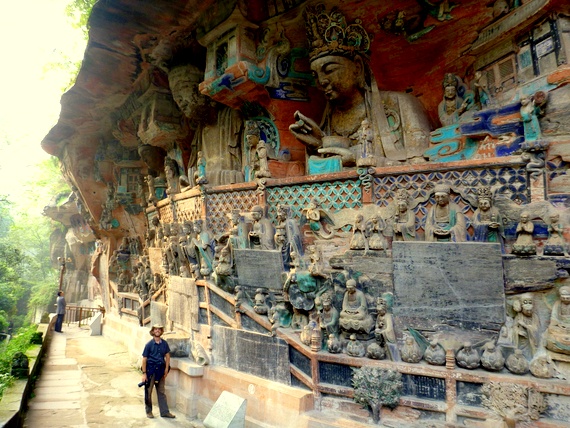 The scale, detail, and color of these cliff carvings completely blew us away. Even if brand new and created by an army of artisans this would be astounding, but the fact that this was the life’s work of essentially one monk, Zhao Zhifeng, who raised the money, designed, and oversaw the project from 1179 to 1245, makes it mind-blowing. 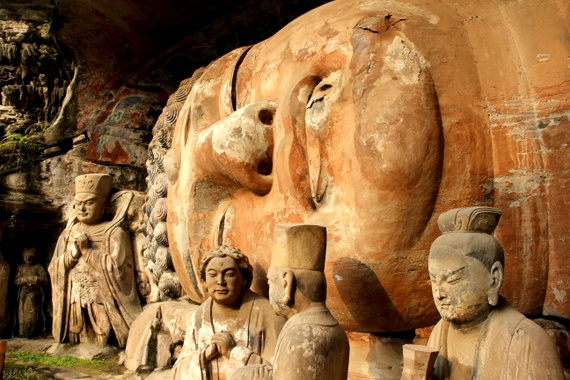 Baoding Shan was built about the time when Confucianism started to mix with Chinese Buddhism so the display is not your average mix of Bodhisattvas. Scenes like this peaceful Reclining Buddha next to the gruesome “Hell of Knee Chopping” kept things interesting, especially in this comic-strip-style story layout. 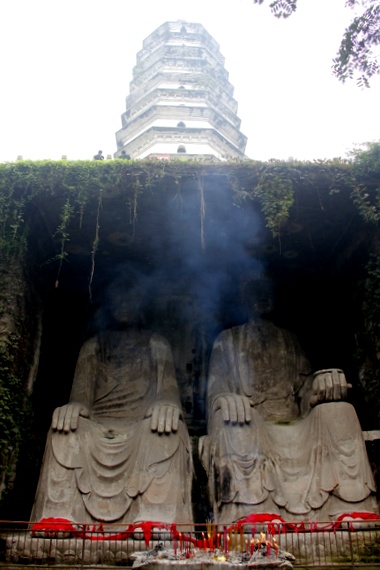 That night we went back to Dazu city, ate the real-deal Kung Pao Chicken (thanks for the recommendation, Frank Sun), strolled the tourist-free streets and by morning we were tracking down more carvings within the city at Bei Shan. While these 892-AD carvings weren’t quite as beautiful as Baoding Shan, we loved that our visit brought us to this neighboring pagoda-meets-twin-Buddha complex. (See the slideshow for more on this jam-packed 24-hours we tried to fit in this paragraph). 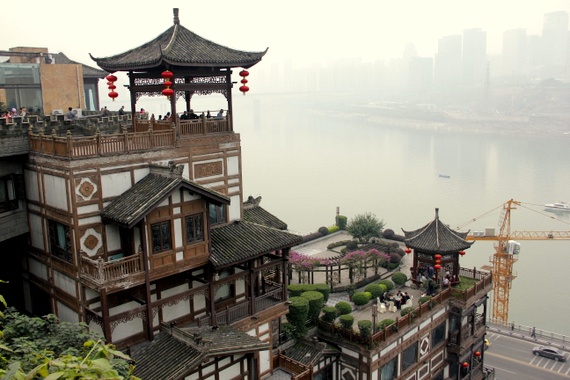 We probably could have stayed in Dazu for days but the Yangtze river awaited us in Chongqing. 2,400 km upstream from Shanghai and the gateway between eastern and southwestern china, Chonqing has become a commercial hub and China’s fourth biggest city with 29 million people. (At that size you’d think we would have heard of it before, right?). We did a little shopping, ate the spiciest hot pot EVER, and strolled the riverside, but our real goal was to find ourselves a cruise through the Three Gorges to Yichang … 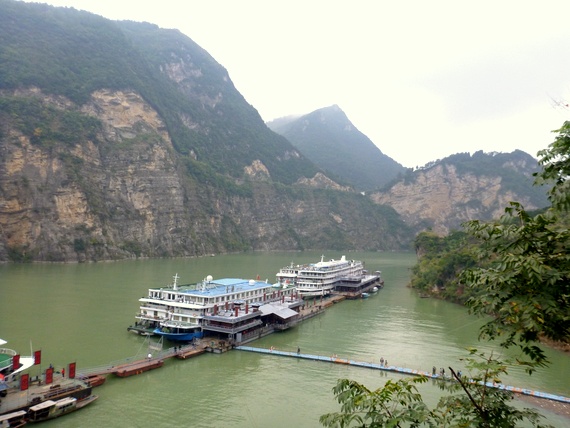 With the help of tour-agent Jimmy Yin of Yangtze Dream (the one English-speaking guy listed in our copy of China Rough Guide 2007), we booked the three-day cruise in a “VIP suite.” The cabin in the brochure had a huge living room, plush sofas, crystal chandeliers, plus he was going to give it to us for the price of a normal first-class cabin. How could we say no? 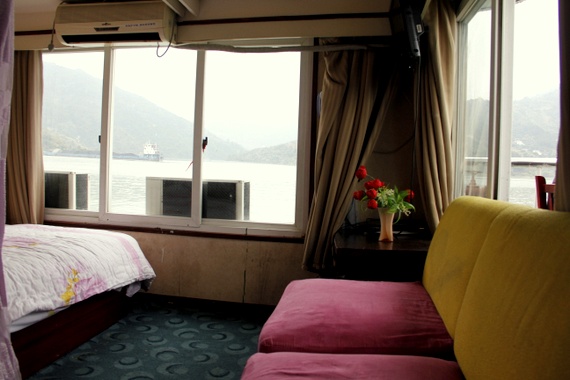 Not exactly like the brochure pictures or as Jimmy’s flowery words had described, but this is our room. We are hiding the purple lacy beaded curtains and ripped wallpaper so that you can focus on the two walls of windows. So yes, we might have been slightly duped on this beater of a suite, but having the limestone gorges approach us from the panoramic comfort of our Barney-colored couch and frilly bed in the morning was worth a piece of our pride. 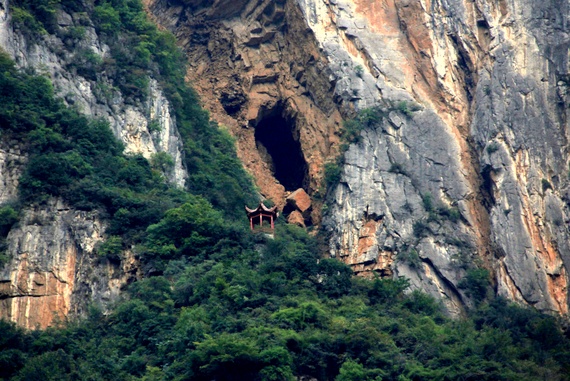 On the three-day ride there where five optional stops to see temples, historical sites, and take side excursions down smaller channels. Though without ever getting off the boat we could spot mountain pagodas, climbing monkeys and ancient hanging cliff coffins tucked in the ombre-colored cliffs and caves. 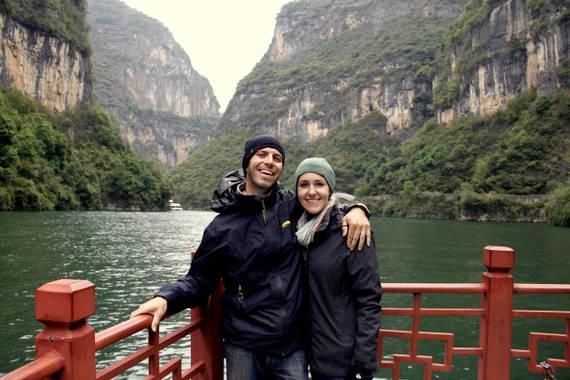 The one excursion we did sign up for was the Three Lesser Gorges. We switched to this medium-sized boat then a smaller boat (complete with a singing Chinese guide with the most obnoxious microphone and of course….costumed photo ops) to explore its dramatic passageways. To give you a sense of this sensory overload, WATCH OUR VIDEO. 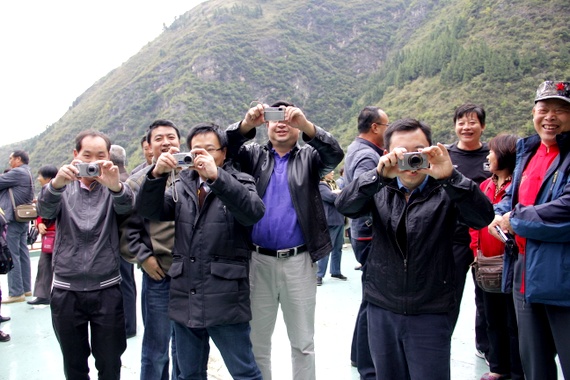 This photo sums up life for us on the boat and the fact we have never felt more popular in our lives. For three days we were celebrities, novelties, or perhaps just the boat mascots–whatever it was, people wanted to take their photo with us..all the time! At first passengers would do sneak-attack photos, where they would stand behind us while their friend took a picture of us “together.” As the tour progressed and we started making more friends, the flood gates opened. Lines would form to hold peace-sign poses together then degrade into a snap-happy mob (like the photo above and in this VIDEO we took just to document). 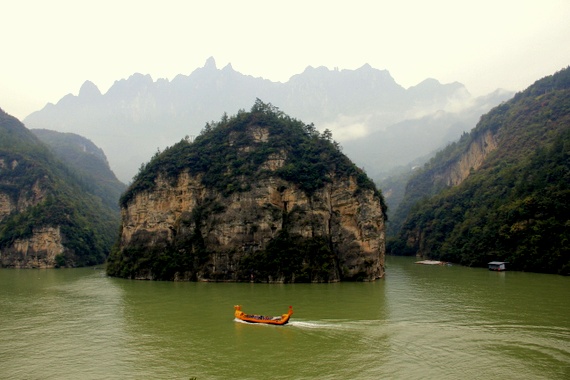 After a night singing in the karaoke parlor and looking at the stars from our Barney-esque sofa, we docked and awoke to this view. The mist draped over the mountains and wafted through the gorges all from the foot of our bed. Some of the tour went for more little boat tours but we opted to get out and hike the hills for aerial views. 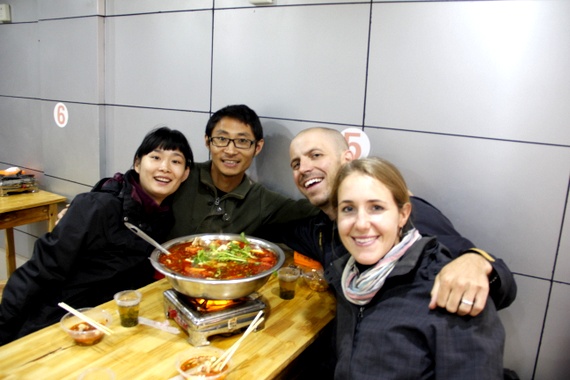 We arrived to our final port of Yichang and had a farewell hot pot lunch with our new friends Lizzie and Alex. If it wasn’t for them (the cutest honeymooners and the only two English speakers we met) we wouldn’t have had a clue what was going on during the cruise—from the time to board, eat, or evacuate the ship. Not only acting as subtitles in this foreign episode, this couple was our cultural translator, answering the million questions we had in a given day: How do you play majong? What do you think of communism? Why is everyone spitting? Do you wish you had Facebook…and more perplexing questions. To Lizzie and Alex and all Chinese passengers on the Yangtze, thank you for letting us into your world.

15 thoughts on “Cruising the Yangtze”