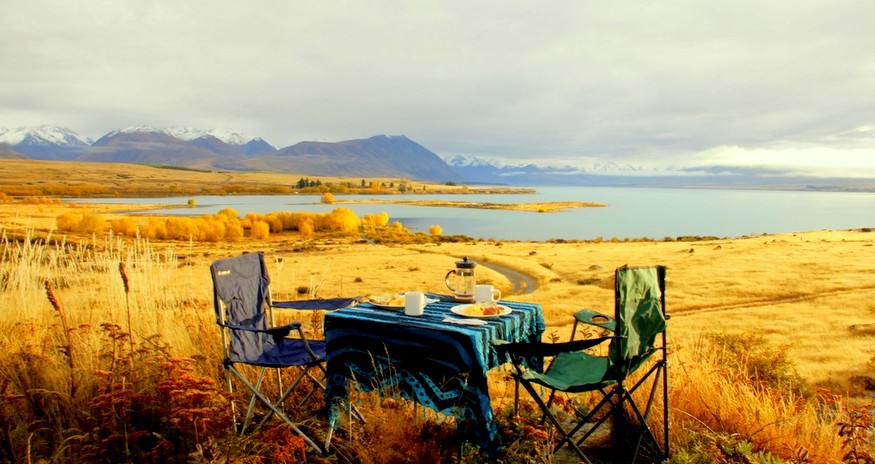 Imagine arriving to the shore of a glacial lake, surrounded by yellow poplar trees and snow-capped mountains and saying, “We’re home.” This my friends, is campervanning in New Zealand, where each night you stop at an absurdly gorgeous place, make a home-cooked meal, open a bottle of Marlborough wine, and then wake up to a million-dollar view, free of charge. We carried on like this for 10 glorious days around the South Island and we have so many amazing locations and experiences to share that we are rolling them out over four HoneyTrek posts, starting with the incredible Southeast of the South Island. Get ready, get excited. 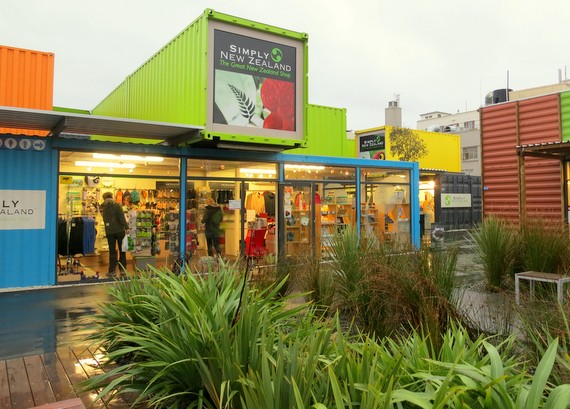 Christchurch is largest city in the South Island and of hub of Maui Campervans, our chariot provider. We arrived a day in advance of our camper reservation to explore town and had no idea what we were in for. Eerily enough, we had a New Zealand Lonely Planet from 2004 and it spoke of Christchurch’s Gothic Revival architecture, grand cathedral, manicured parks…all true, pre-2011. A 7.1 earthquake struck, followed by a 6.3 quake just six months later and the later nearly demolished the city. Years later, some parts of Christchurch are still downright depressing, but there is also an incredible sense of hope and determination that makes you respect this town. Exhibit A: The “Re:Start Mall” (above). Assembled from colorful shipping containers, it was the first major project to re-establish their city with a focus on efficiency and creativity. Exhibit B: The Gap Fillers. Instead of leaving lots barren and waiting for building permits, art exhibits and interactive spaces fill the void. Christchurch may not be fully back on its feet, but mark our words, give them a decade and it will be one of the most modern cities in the world. 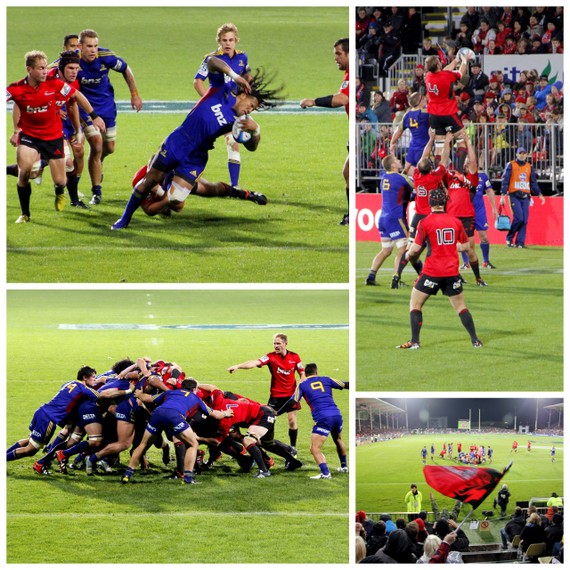 Perhaps at the top of the Christchurch rebuild-list was the Crusaders rugby stadium. Rugby is a serious part of Kiwi culture with the All Blacks, the best team in the world, the country’s pride and joy. That night the Christchurch Crusaders were playing the Dunedin Highlanders (both with multiple All Blacks players) and we got two $15 seats in the students section. The game was thoroughly aggressive, fast moving, and such fun to watch–enhanced by two genial old fans sitting next to us, kindly explaining what the heck was going on whenever we glanced in their direction. Best yet, the Crusaders won! 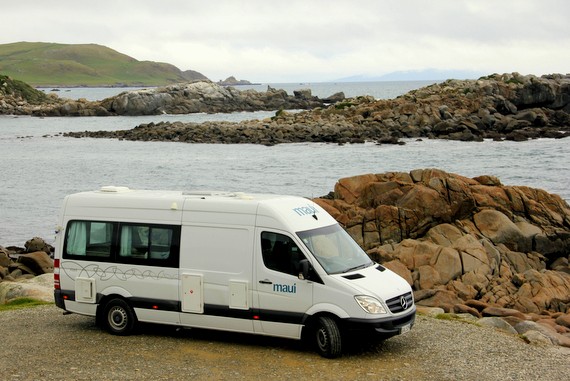 The time had come to meet our faithful steed, our Maui Ultima Mercedes Sprinter! We picked up our two-berth campervan with leather interior, three-burner stove, outdoor grill, spacious cabinetry, and lounge-area-turned-bedroom, and instantly fell in love. This would be our most stable home in seven months. Ironically it was on wheels and we’d sleep in a new location each night…BUT the idea of not changing beds for ten days sounded like heaven. Not to mention, it had a proper kitchen for us to cook all the foods we missed. We left the Maui lot and went straight to the nearest grocery store, stocking up like there was no tomorrow. Campervan Lesson #1: Always shut your cabinets. On our first turn, we had a glass jar of raspberry jelly go shooting across the van and shatter absolutely everywhere. With that minor disaster out of the way, we were ready to take on the southern South Island! 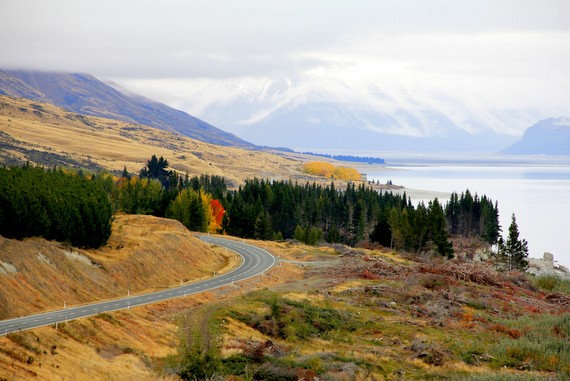 We left Christchurch way later than expected so the new plan was to get as close to Mount Cook National Park as possible before dark. We zoomed into our trusty Maps With Me app, trying to survey the digital landscape for a pretty place to sleep and found a campsite near Lake Alexandrina. We went thinking that campgrounds are where campervans are supposed to stay, but one look at this sad parking lot full of flat-tire RVS and we thought, “This can’t be right.” We’d heard it was legal in New Zealand to “Freedom Camp,” essentially overnight parking on public land that isn’t signposted otherwise. It seemed like a bit of a gray area but we were willing to take our chances and parked at what seemed like a perfect spot overlooking the lake. We woke up and this blog’s opening photo was our view over breakfast. Freedom Camping, I’m yours!

Mount Cook National Park is a world heritage area with the highest mountain in Australasia, plus 22 of New Zealand’s 27 mountains over 10,000 feet. You could spend months trekking the park but for a heck of a day hike, tramp to the Tasman Glacier View and Blue Lake. We were driving in the rain towards the trail head, when we saw two sopping girls with their thumbs out. Flash back a year and we would have never picked up hitchhikers, but now having hitchhiked ourselves on more than a few occasions, it was our civic duty. “Hop in, ladies!” From the Blue Lake Shelter the trail splits, one going towards the Blue Lake with close-up views of the glacier face and the other to Tasman Lake with its many icebergs…a few too many icebergs. As spectacular as these black and blue islands are to look at, the glacier is receding fast, loosing about 600 meters per year. Global warming sadness. 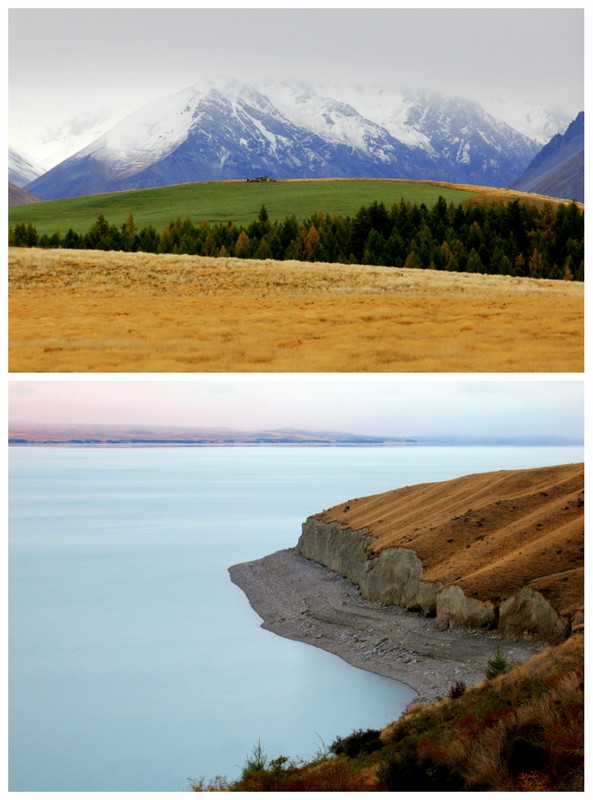 Moving east onto Highway 83, we transitioned from snowy mountains to the beautiful teal waters of the Otago Coast. 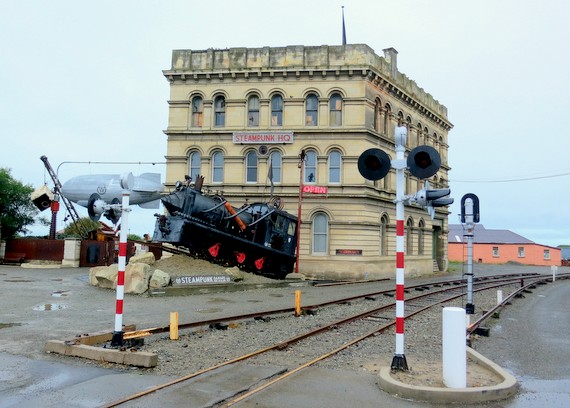 We pulled into the Victorian-era town of Oamaru late at night with no goal, other than a solid WiFi connection, and all the coffee shops had closed. I had a story due the following day for Conde Nast Traveler, so we did the “internet creep,” slowly cruising town for a signal (Campervan Lesson #2). Our bars went up, “Stop!” The Oamaru Library parking lot became our night office and a spot on a residential street our freedom camp…not as glamorous as Lake Alexandrina, but it served its purpose. We tried to get up before the street cleaners and explored the charming Oamaru. Our favorite spot: Steampunk HQ. A museum highlighting this sci-fi/fantasy genre that I can’t quite explain but obsesses with steam-powered machinery and Victorian get-ups. Pop a few pence in this coin-operated train and its lights flash, the steam engine choo-choos, and the chimney spits fire.

Just south of Oamaru are the miraculous Moeraki Boulders. These unusually large and perfectly spherical mudstone rocks lie along a stretch of Koekohe Beach. Sure there is a scientific theory on their erosion and placement here, but we’ll go with the Maori legend…they are the remains of eel trapping baskets washed ashore from the wreck of a canoe. That explains it for us! 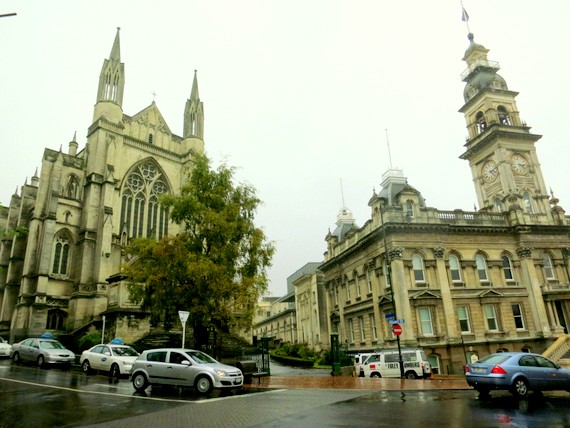 It was pouring rain by the time we got to Dunedin so sadly we only gave this lovely town a drive-by. It is said to be the best preserved Edwardian and Victorian heritage city in the southern hemisphere, founded on the hard work of whalers, gold miners, and hearty Scottish settlers. (Fun Fact: Dunedin is Gaelic for Edinburgh.) It was the country’s biggest city until 1900 and currently the 7th largest and a lively university town. 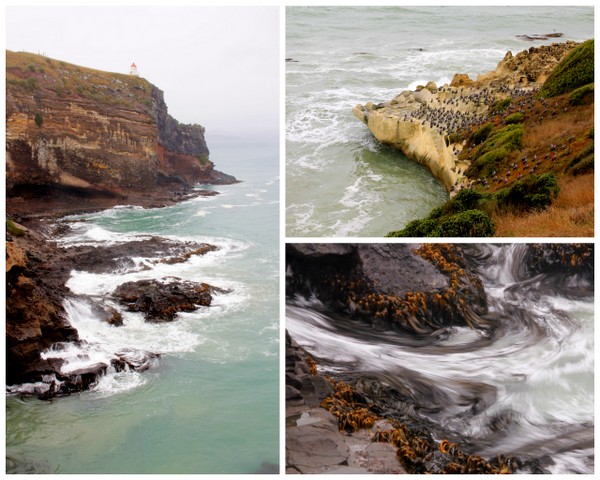 We were at the Dunedin turnoff to the Otago Peninsula, a 20-km long finger of land with some of the best marine life and bird watching in the world. Taking the turn meant a 40-mile detour in the rain, an hour before sunset. Do we go? Of course we go! We went to the very end to the Royal Albatross Center, the only albatross colony in the world that is accessible by land, with endangered yellow eyed penguins, hooker sea lions, and the occasional sea elephant. Truth be told, we didn’t see many of these critters but what kept our fascination was the bull kelp! These long strands of seaweed were in an endless tussle with the sea; it was like watching an 80s hairband rocking out in slow motion. 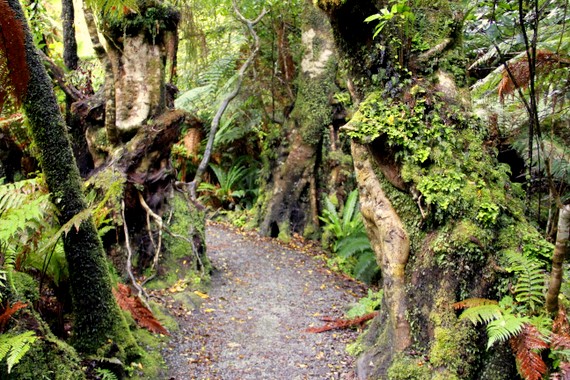 No matter how hard we tried to be find a freedom camping spot before sunset, we almost always pushed our exploring until darkness. There was so much too see! The one benefit of this poor planning was picking a beautiful spot based on gut feeling and waking up to discover your spoils. This night in the Catlins, we woke up to incredible view of the headlands and dozens of sheep surrounding the camper. We’ll call that a win. Continuing along the southern coastal roads, there were not only gorgeous beaches but Lord-of-the-Ring-style podocarp forests. I could have sworn we saw a few hobbits darting between the moss-encrusted trees. 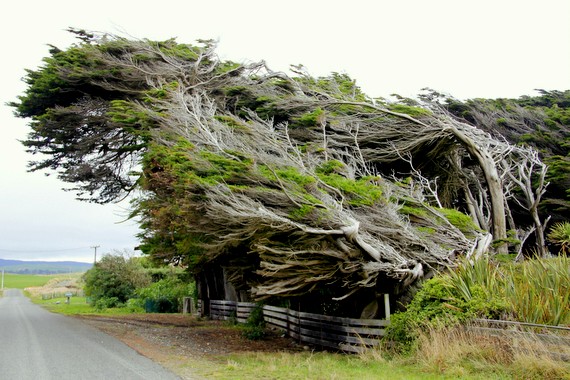 Windy much? Growing in such gusty coastal conditions, these trees in the western Catlins looked as if they were stuck in a never-ending hurricane. 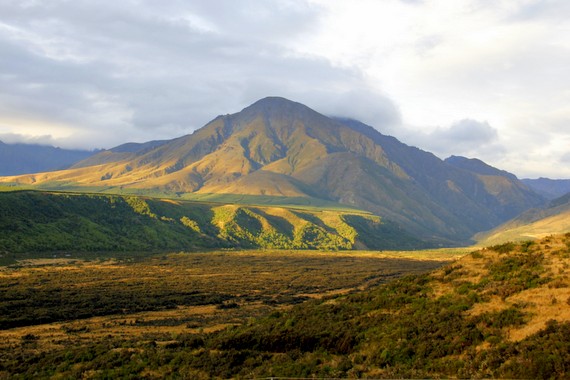 We hit the end of the road at Invercargill and hung a right towards the legendary Milford Sound. We drove deeper into the Fjordlands, thinking about the incredible beauty we’d seen thus far and dreaming of what tomorrow would bring…to be continued!