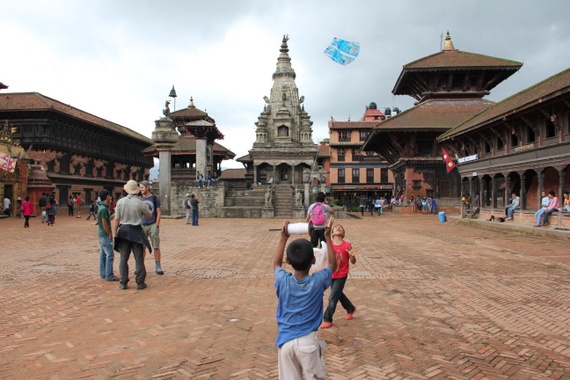 Upon our arrival to Kathmandu, Nepal we were awe-struck by the beautiful temples and stupas hidden in every nook and cranny of the city (view this Kathmandu slideshow to see what we’re talking about), but little did we know that 20km away there would be a medieval city that would top it…enter Bhaktapur. As a UNESCO World Heritage site and the capital of Nepal until the second half of the 15th century, Bhaktapur gives a glimpse of what a royal Nepalese city looked like 800 years ago. 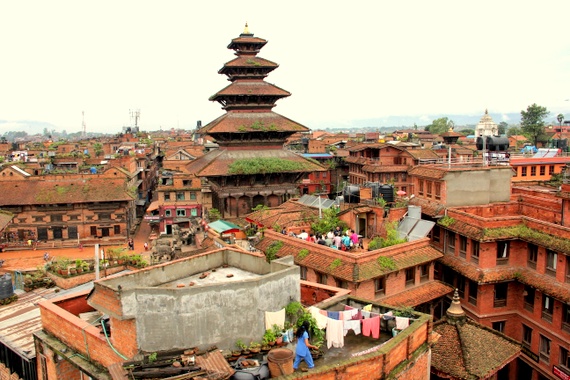 The five-story Nyatapola Temple towers above the city as one of the tallest pagoda-style buildings in the Kathmandu Valley. Touristy restaurants surround the plaza to admire it but if you ask a local how to get to You Me Mini Rooftop Restaurant, you’ll find the best view around–plus cheap eats. At the foot of Nyatapola Temple be sure to admire each tier’s guardians: mythical wrestlers, elephants, lions, griffins, and goddesses of Baghini and Singhini…each level’s protection said to be ten times stronger than its predecessor. 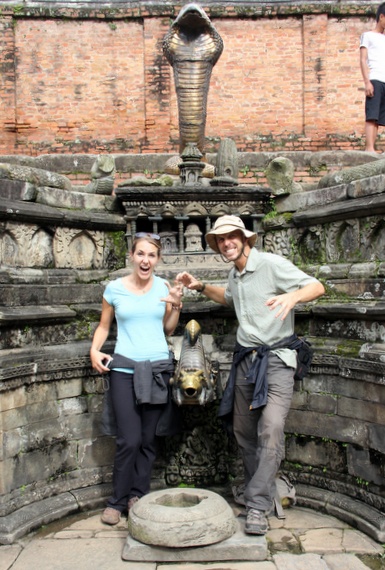 Public baths are all over Bhaktapur, most with gorgeous carvings and fixtures. Trying for no apparent reason to mimic the faucet design, we’re doing our best impersonation of a ferocious snake-goat-elephant-dragon face. 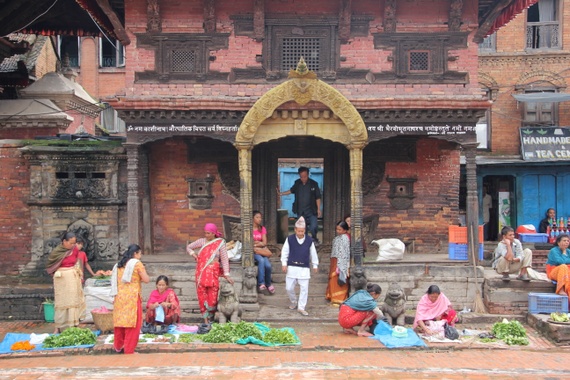 While Bhaktapur may the best preserved of all the ancient Nepali cities, nothing feels too precious. All day cobblestone streets serve as markets, temples double as vegetable stands, and palace gates become flower stalls. (Traveler tip: If you go to Bhaktapur, spend the night so you can see the city awaken without the tourists.) 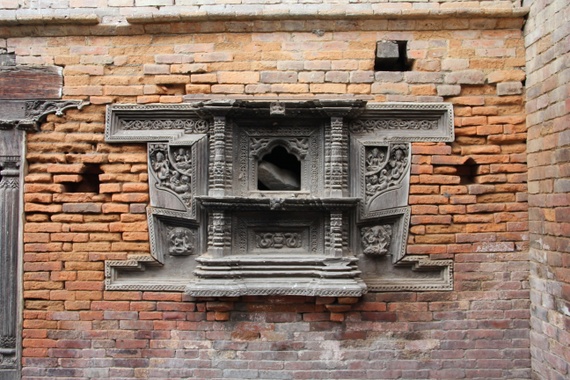 The windows and doors of Bhaktapur are adorned like no other we’d seen in the world. Forget squares or circles, these things spread like eagles through brick. We came across this window, which is approximately 80% frame and 10% opening, after taking a “wrong turn” down a side-street. I say “wrong turn” in quotes as it wasn’t on our walking tour map, but then again, that’s always where you find the real gems.

With coffee and local sweets in hand, our Dutch friend Seb, Anne and I made our way to our hotel rooftop to watch the sun rise over the city. The golden hue over the mountains and ancient city’s streets was worth the lack of sleep. 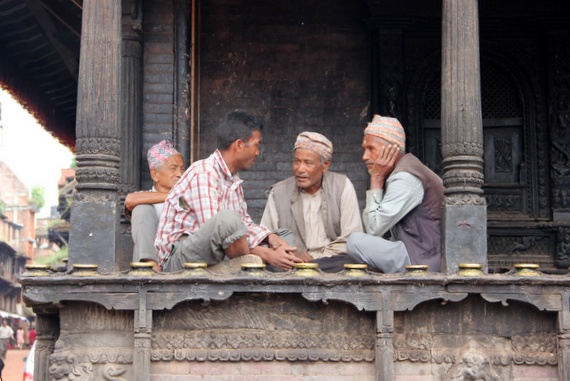 Most men in Nepal where these fantastic Dhaka topi hats in colorful patterns. While observing them, we couldn’t decide whether these old men were explaining the ways of the world to the young gentleman, or he was telling them exactly how the internet works. 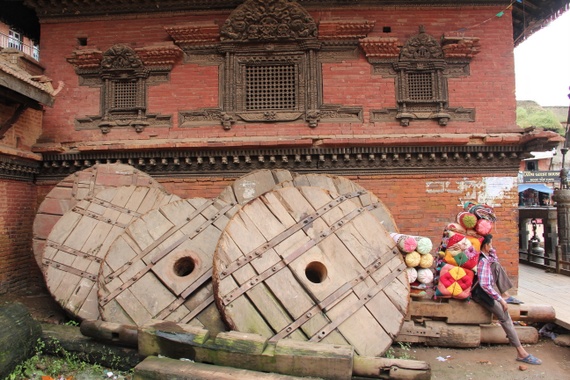 This photo captures a little bit of the magic that is Bhaktapur. A traveling cushion salesman taking a breather, sitting on massive wooden chariot wheels, that are paraded down Bhaktapur’s streets during Nepalese New Year, in front of a beautiful 500-year old Hindu temple. 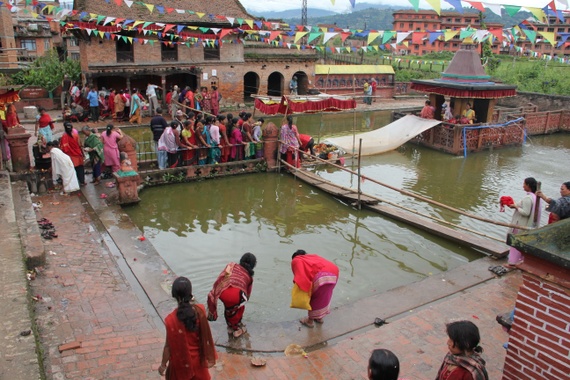 In Nepal, there is such an incredible fervor for Hinduism that we never quite knew what was a festival or another given day of the week. Walking through the streets, we noticed nearly a hundred women lined up at the four corners of this reservoir, flower throwing, foot scrubbing and gift giving in droves. 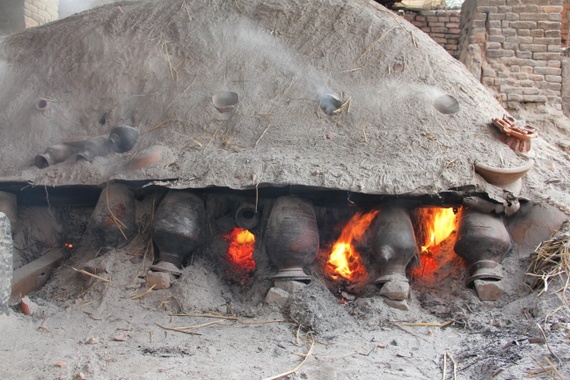 Aside from the plethora of temples, wood carvings, and creamy yogurt, Bhaktapur is well known for its black pottery. After seeing young boys prep the clay and ladies spin it on the wheel, we marveled at the their old-school method of firing.

UNESCO considers the three cities of the Kathmandu Valley as one world heritage site and after Kathmandu and Bhaktapur, we were missing just one: Patan. Somewhere between Kathmandu’s hustle n’ bustle and Bhaktapur’s pristine grounds, Patan is a bit more gritty, but way less touristy and packs one heck of a Durbar Square. This Krishna Mandir temple is one architectural beauty out of nearly a dozen packed in this palace square. More than a tourist attraction it’s the heart of city. So to get a feel for life in Patan, we tucked under a pagoda roof for a little people watching with old ladies saying mantras, kids texting from a temple stoop, and old men chatting over masala tea.

Spending three days in Kathmandu, two days in Bhaktapur and an afternoon in Patan gave us a hearty taste of ancient Nepal but for the complete Nepal experience, you’ve got to get into the Himalayas. Stay tuned for our next blog on our ten-day trek to the Annapurna Base Camp.