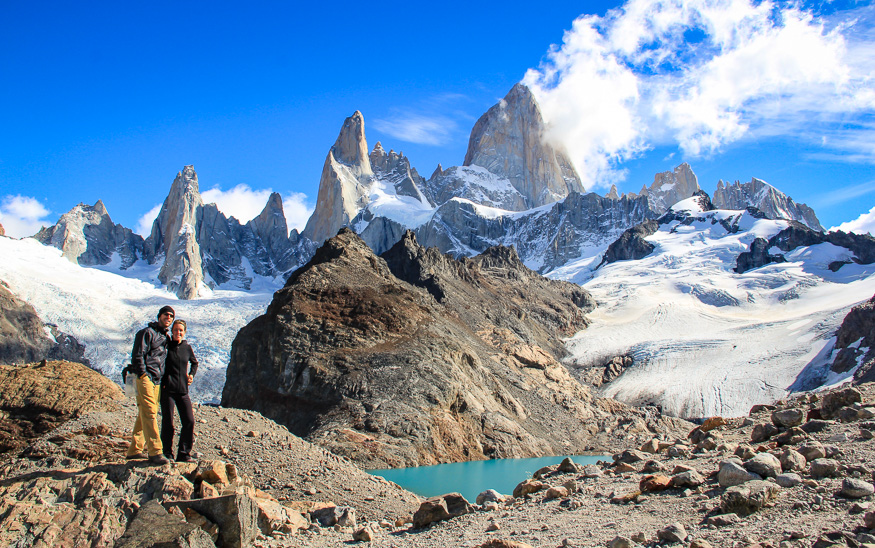 If you can handle freezing temperatures, so much more of the year and world will open up to you. Put on the right gear and a snowy forest looks ideal for a hike, a glacier invites a climb, and an iceberg-filled lake inspires a kayak session. Cold is just a frame of mind, and those who don’t overcome that icy mental block will miss auroras dancing across the sky, the thunderous calving of a glacier, or a penguin nibbling on their camera strap. Frosty places hold precious secrets and share them with the hardy. Sami reindeer herders, Antarctic scientists, and Vermont maple tappers understand the beauty of winter and how to tame it with a blazing fire, woolly blankets, hot toddies, and cuddling up at the end of the day. Though you don’t always need frigid weather to enjoy the ice. The Southern Hemisphere’s glacial destinations can be even better in summer (ie. Dec-March) when sunshine and spas cut the chill.

Find a cool getaway from the “Snow & Ice” chapter of our National Geographic book, Ultimate Journeys for Two: A compilation of our favorite 75 destinations, most inspiring travel stories, and handiest tips. 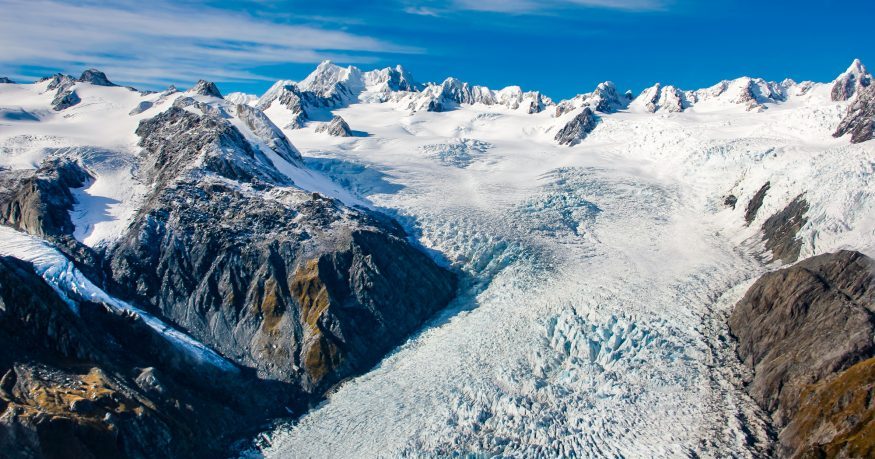 From the tallest peaks of the Southern Alps, miles of glaciers flow down to a temperate rain forest and golden beach. Such diversity of terrain seems impossible within one national park, but Westland Tai Poutini has it in spades. Driving along the South Island’s West Coast, a valley of ice appears through the podocarp forest. Like endless rows of shark teeth, in pearl white and luminescent blue, Fox Glacier is like nothing you’ve ever seen. That is, until you drive 14 miles up the road, where you meet its twin: Franz Josef. Both glaciers extend eight miles into the Southern Alps, and need helicopters and crampons to truly explore them. But that’s not a problem—it’s an adventure. Franz Josef and Fox villages are ready with every possible snowy outfitter (ice climbing, skydiving, glacier trekking, and so on) and hot springs for your return. Pair your ice with a bit of beach and take the scenic drive to Gillespies to admire the seal colony and relics from New Zealand’s mining days. So whether one of you fancies winter and the other summer, you can enjoy the best of both seasons in one locale.

Where to Stay: Te Waonui Forest Retreat, modern, eco-conscious, and the most luxurious resort around. Aspen Court Motel: Updated rooms with kitchenettes and knowledgeable staff, in the heart of Franz Josef village.
Get Romantic: A couples hot stone massage and a private bath await in the rain forest and spa of Glacier Hot Pools.
HoneyTrek Tip: Sign up for your glacier excursions same day. There is a slight risk trips will fill up, but you’ll be able to time your flights and ice treks with the best weather. Check the local Department of Conservation office for the most accurate forecasts. 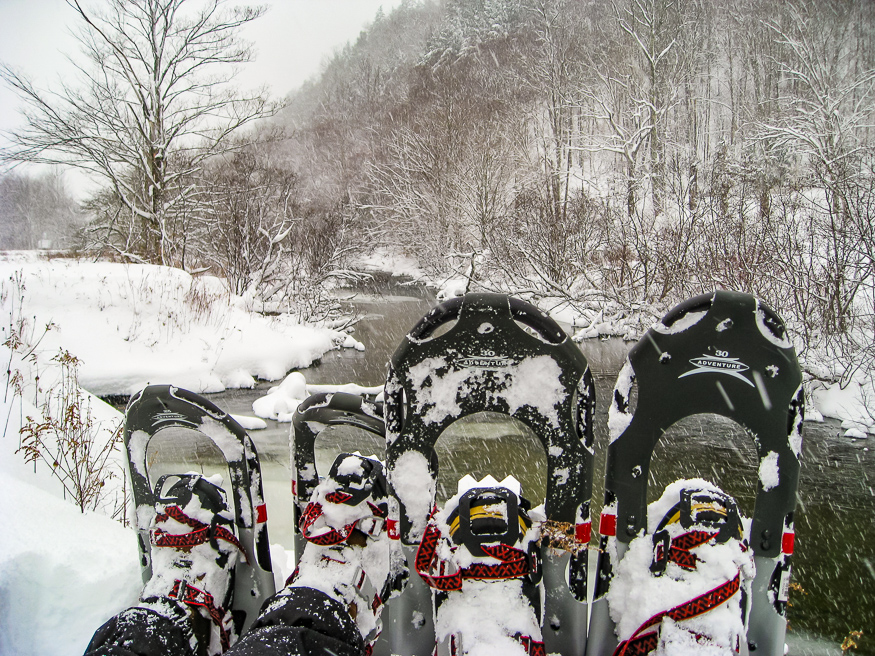 Vermont may not be as wild as Patagonia or as steep as the Rockies, but this spunky slice of New England with its maple syrup farms and covered bridges makes up for it in a myriad of ways. With the second smallest state population in the United States, Vermonters are often underestimated—but they are a savvy bunch. It’s not by accident that their state remains nearly 80 percent covered in forest and they’ve built more hiking trails than highways. They have a fierce love of the great outdoors, especially when it’s covered in a blanket of snow. One of the snowiest states in America, Vermont knows winter like a best friend. Kids learn to snowshoe in phys ed, and many adults keep a pair in the trunk of their Subaru. It’s home to some of the best ski resorts east of the Mississippi, including the skier-run Mad River Glen, and Killington—one of the few in the country to stay open through May. Come to the Green Mountain State and you’ll leave with snow in your hair and a smile on your face.

Where to Stay: Mountain Top Inn, on 350 acres, this lakeside resort embraces winter with ice- skating, horse-drawn sleighs, and cozy spaces. The Woodstock Inn: In the charming town square, this historic hotel has contemporary rooms, a spa, and Nordic center.
Get Romantic: Bundled up in blankets, ascend Killington Mountain in a snowcat-drawn sleigh to the Ledgewood Yurt. By light of candles and a crackling fire, enjoy a five-course meal of regional delicacies.
HoneyTrek Tip: Enjoy the ultimate Vermont day…Ski the iconic Suicide Six, sample maple syrup at Sugarbush Farm, try the 19th-century recipe at Crowley Cheese, and savor a craft beer at Long Trail Brewery. 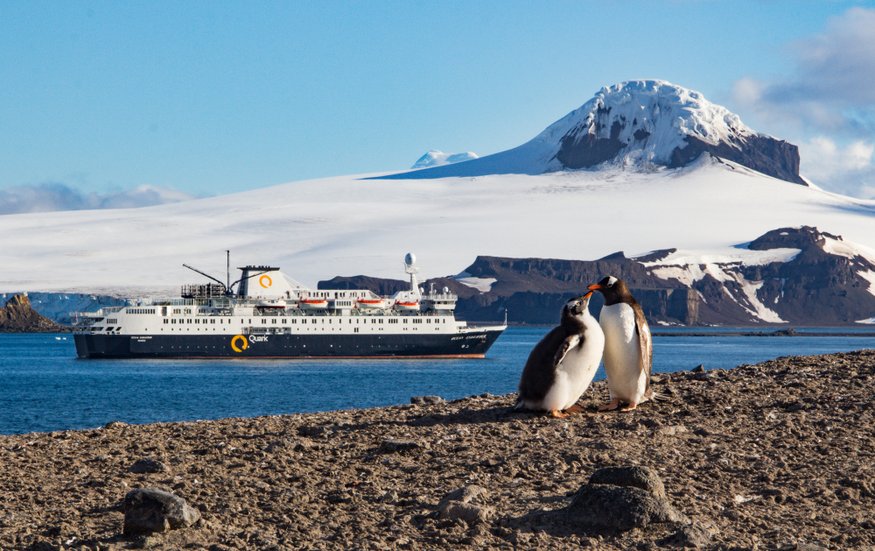 The coldest, driest, and windiest continent is as close to utopia as it gets. Not owned or exploited by any nation, Antarctica is shared by 53 countries for scientific advancement and the common good of humanity. Mother Nature runs this show, and with the ocean, wind, and wild animals on her side, she’s crafted one of the most stunning places on Earth. About 600 miles from the tip of South America, with one of the world’s most dangerous seas in between, the voyage to Antarctica is reserved for the intrepid. After two days on the Drake Passage, with 25-foot swells and virtually no sign of life, a pod of humpback whales appears. You follow them toward icebergs with penguins waddling along the ridges. The gleaming white continent comes into focus—and this is just the beginning. From here, you’ll Zodiac cruise to gentoo penguin colonies, kayak through glacier-fringed archipelagos, and walk in the footsteps of polar explorers.

Where to Stay: Quark Expeditions, among the most adventurous, fun-loving, and affordable fleets. One Ocean: A luxurious ship with an adventure and environmental focus. Note: Most trips are 8 to 11 days, departing from Ushuaia, Argentina, or Punta Arenas, Chile.
Get Romantic: Few make it this far. Head to the top deck and celebrate with a champagne toast to love, glaciers, and penguins.
Honeytrek Tip: Don’t pay full price. Sign up for expedition newsletters to track flash sales. November and March trips tend to be cheaper. Find last-minute deals in Ushuaia. 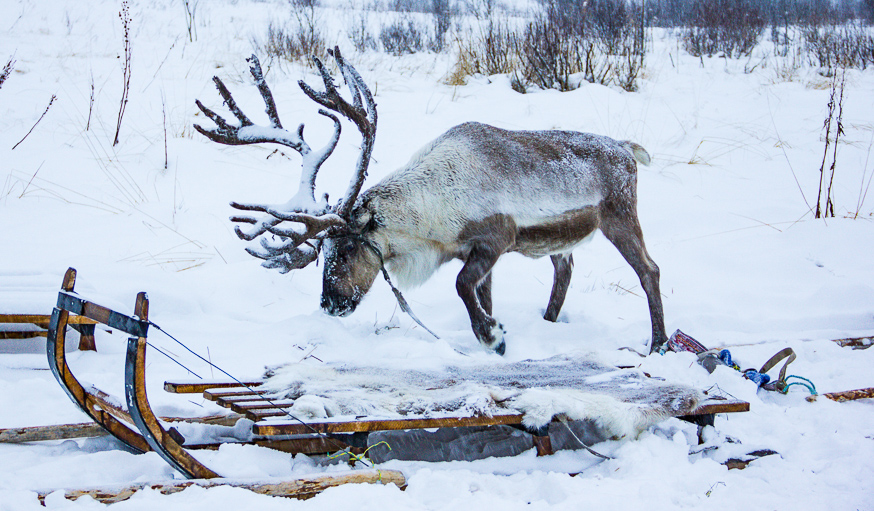 The Gateway to the Arctic, the Paris of the North, and one of the northernmost cities in the world, Tromsø has many impressive titles. On an island inside the Arctic Circle, with roots as a frontier town, it’s a surprisingly sophisticated place. Being a bit warmer destination (the gulf stream keeps it from getting to much below freezing) and close to the polar bears and walruses of Svalbard, it not only attracted hunters, but also esteemed explorers and scientists. Today the city is home to the Norwegian Polar Institute, University of Tromsø, and over 100 nationalities, making for a lively cultural scene (claiming more bars per capita than anywhere in Norway). Even though it’s on the Gulf Stream and never gets too far below freezing, you don’t need to travel far to find the wild alps and dramatic fjords. Away from the downtown lights, auroras burst in neon green and purple, Sami tribesman herd their reindeer, and snowmobiles are the best way to get around. Chase the northern lights, dogsled through the tundra, and warm up with a little Arctic adrenaline.

Where to Stay: Thon Hotel Polar, a whimsical boutique hotel in the heart of Tromsø. Camp Tamok: Lyngsfjord Adventure’s lavvu tents and Arctic chalets, plus snowmobiling, reindeer and dogsledding, 50 miles from downtown.
Get Romantic: Hop aboard the dreamy Vulkana Spa Boat. Relax in the Finnish sauna or soak in the saltwater hot tub on deck. Both have panoramic views.
Honeytrek Tip: Most outfitters provide Arctic outerwear, so don’t pack all your ski gear. Pack Yaktrax for Tromsø’s icy streets and a tripod for aurora photography 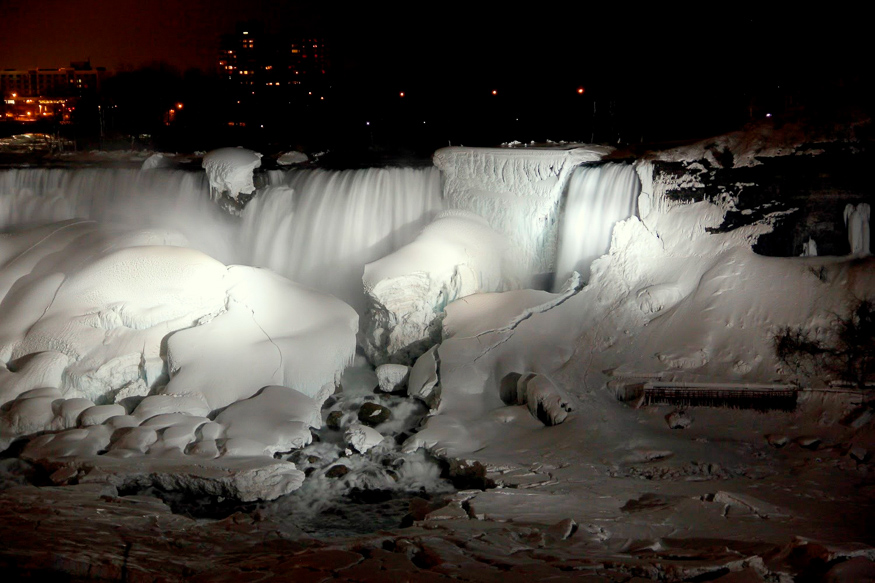 The dual-nation falls are the largest in North America and among the most visited in the world, but few people make it there in winter. The freezing temperatures keep tourists away, but that’s exactly what makes Niagara so special. Of all the globe’s greatest falls (Iguazú, Angel, Victoria, and so on), this is the only one that freezes. See cascades framed with a glacial layer of ice, its boulders entombed in frozen mist, and its trees dripping with icicles. The scene is incredible, especially because you practically have it to yourselves. Known as the “honeymoon capital of the world,” it has lured couples since the late 1700s (including relatives of Aaron Burr and Napoleon Bonaparte), and it’s keeping up its romantic claim to fame with luxurious spas, top-notch restaurants, and dozens of wineries. Although some attractions close in the winter season, the region is never shy on adventure. Put on your snow boots and hold each other tight; these are falls like you’ve never experienced.
Come during Canada’s Festival of Lights is December– January or just after a cold snap for max ice and warmer temps.

Where to Stay: The Giacomo, a boutique art deco hotel adjacent to Niagara Falls State Park. Niagara Crossing Hotel & Spa: In the charming village of Lewiston, New York, with fireplaces and views of Niagara Gorge.
Get Romantic: Dine at the delightful Carmelo’s in Lewiston, then stroll the falls, illuminated in a dazzling succession of colors (a nightly spectacular until at least 11 p.m.).
HoneyTrek Tip: Although the flashier Canadian side begs attention, spend time in the au naturel Niagara Falls State Park. Designed by Frederick Olmsted, America’s first state park offers 15 miles of manicured trails from the Discovery Center to Goat Island.

Among the Austral Andes and one of the world’s largest ice caps, Los Glaciares National Park is a winter lover’s paradise. It harbors frosted peaks, iceberg-filled lakes, and over 200 glaciers, including the legendary Perito Moreno. While many of the world’s glaciers are retreating, the fierce Perito advances as much as 10 feet a day. Standing before its three-mile-wide terminus, listening to ice fracture, and watching it calve with cannonball splashes into Lago Argentino (Argentino Lake) is among the most awe-inspiring experiences in South America. Just when you think it couldn’t get any better, you arrive at the other side of the park. Mount Fitz Roy, the veritable symbol of Patagonia (the region and the clothing brand), presents itself front and center. Its village of El Chaltén—an oasis of gear shops, vegetarian restaurants, and breweries—exists for no other reason but to access and adore the “smoking mountain.” Trails peel off from every corner of town, and you cannot help but follow them. Patagonia’s beauty will push your body to hike farther and harder than ever before. Your muscles may not always be so grateful, but your inner trekker will forever thank you.

Where to Stay: Hostería Senderos, a cozy contemporary inn, well priced for the level of style and central location in cheerful El Chaltén. Los Ponchos: Boutique hotel and self-catering suites at the edge of El Calafate, overlooking Lago Argentino.
Get Romantic: Upgrade your exploration with a three-day glacier-to-glacier cruise. Aboard the sophisticated Cruceros Marpatag, you’ll find luxe rooms, gourmet meals, and countless occasions for champagne, from Spegazzini to Upsala. Day cruises are also available.
HoneyTrek Tip: Get in shape for Patagonia. When you see these magnificent mountains and glaciers, you’ll want to hike forever. Prepare with a few 10-mile treks on your home trails.

Looking for more awe-inspiring destinations or a fabulous holiday gift? Pick up our Nat Geo book, Ultimate Journeys for Two: Extraordinary Destinations on Every Continent, from Amazon or get a signed copy in the HoneyTrek shop.

10 thoughts on “Best Winter Destinations: Where snow and ice is a good thing”