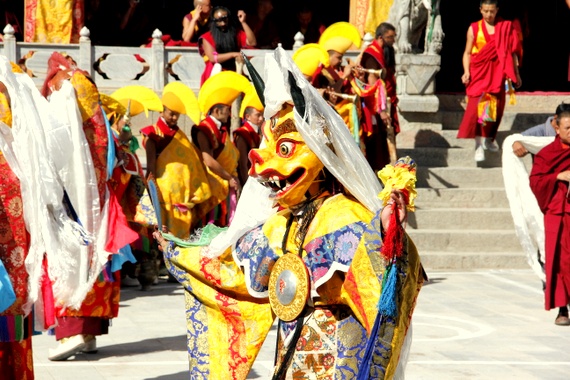 Tibet is world famous for its culture of Buddhism and holy mountains but its neighbor Diqing is a well-kept secret. When China drew the line around the autonomous region in 1951, they didn’t magically move all the Tibetan people and the centuries-old monasteries inside the new boundary…the Tibetan people and their culture live on in this far northwestern province of Yunnan. To navigate this far-flung world, we had the help of Songtsam Lodges, a small network of inns built into the Tibetan communities throughout the province, where we relished in local cuisine, hiked the holy mountains, and experienced the most impressive cultural event of all…the Gedong Mask Festival (watch the VIDEO here). 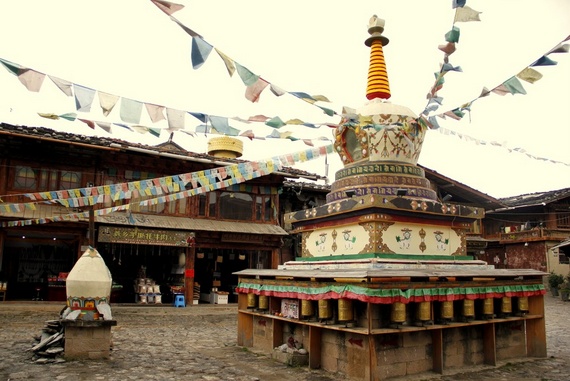 Our first stop with Songtsam was in the fabled town of Shangri-la, set at nearly 10,000 FASL and in the heart of the three parallel rivers area (the mighty Mekong, Salween, and Yangstze), it’s considered the gateway to the Tibetan Kingdom. 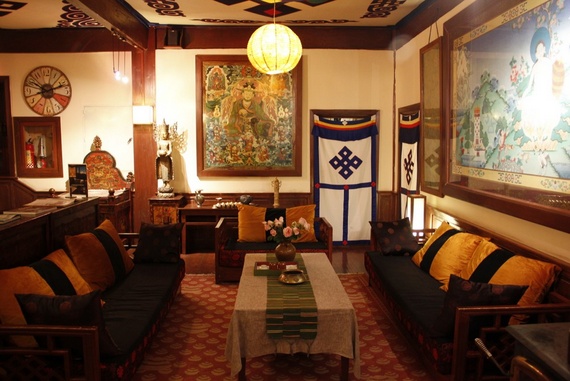 Built from a traditional Tibetan dwelling with thick wooden beams and colorful carvings, the Songtsam Shangri-la embraces the area’s rich roots and a bit of the grandeur its famed 17th-century neighbor, Songzanlin Monastery. We walked into the lobby from the brisk mountain air and felt ourselves instantly warm with a pot of ginger tea, the heat of the fireplace, and the cozy ambiance of handwoven textiles and storied antiques. 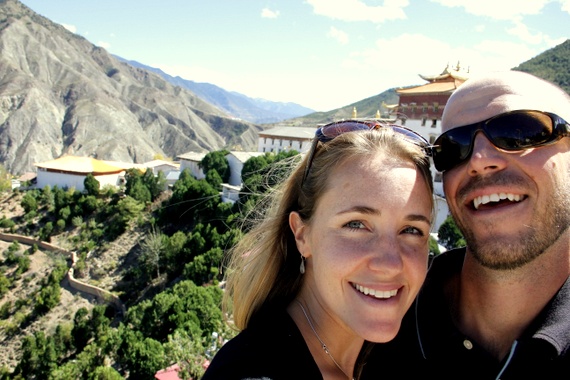 After a trip to Old Town Shangri-la (see slideshow for pics), we continued deeper into the mountains with a four-hour ride to Songtsam Benzilan and the home of the Gedong Mask Festival. Whenever possible we try to coordinate our visits to a country or city with its festivals, so when we found out about the annual festival at the neighboring Dong Zhu Lin monastery, we knew it could not be missed. 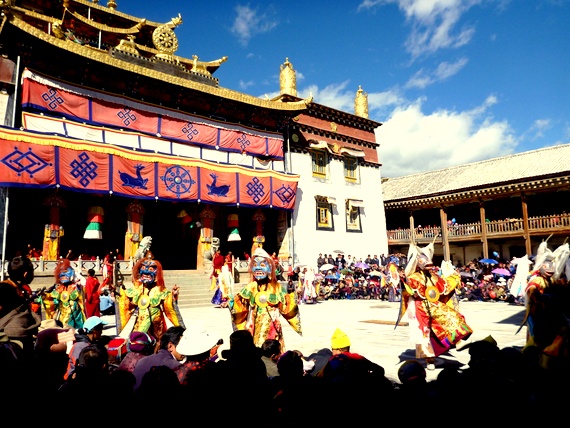 Built in 1574 and escaping the demolition of the 20th-century’s Cultural Revolution, the Dong Zhu Lin monastery is one of the best preserved in Yunnan. With sweeping golden eaves and colorful wooden carvings along its roof line, the beauty of Tibetan architecture had us in awe. 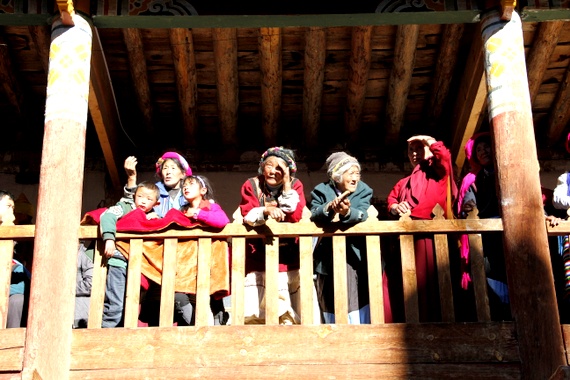 In anticipation of the festival, the town was flooded with locals ladies in their cloth-braided hair, monks swaddled in crimson robes, tribal Naxi families bundled up in their yak-wool sweaters, and about two westerners. When we talked to the other two “tourists,” we found out one had been living in Yunnan for five years and the other was a Tibetologist who had made a pilgrimage to Benzilan to see this rare remote festival. We couldn’t have felt more honored to be there. 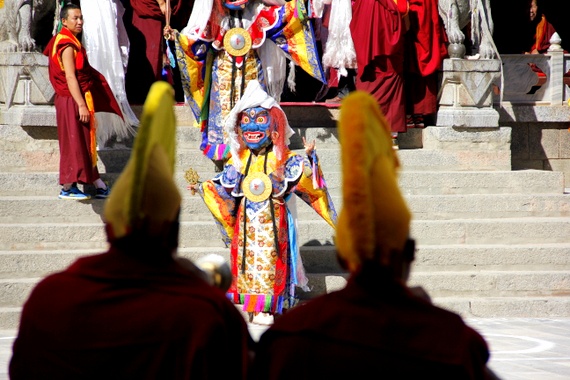 Surrounded by monks playing leather drums and massive horns, masked dancers pranced around the monastery courtyard to appease the gods. Though largely cryptic to us, the general gist of the Buddhist mask festival is to familiarize believers with the frightening faces of hell and show them an alternate path to paradise. 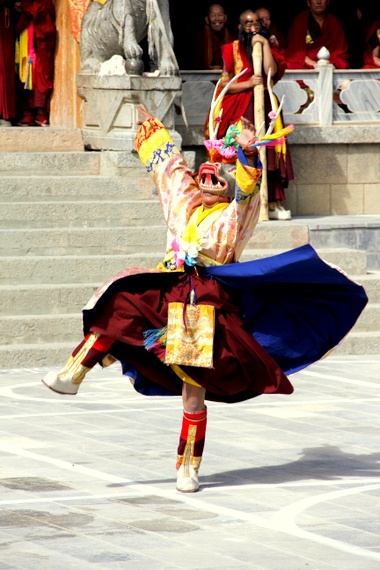 This creature, seemingly a mix between a human, pig and a deer came into the festival to much fanfare, both from the audience and the musicians. After completing the dance it proceeded to use its antlers to tear through a fake human heart, perhaps displaying the fragility of the human body and its irrelevance in the afterlife. 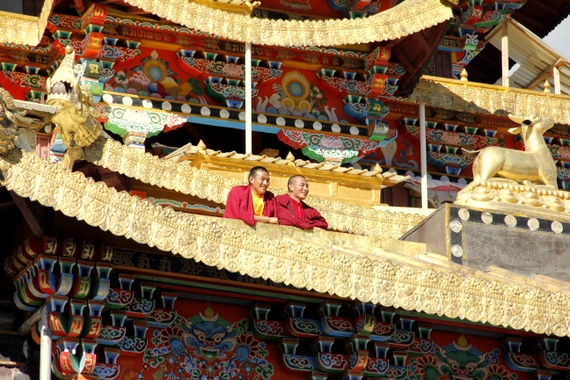 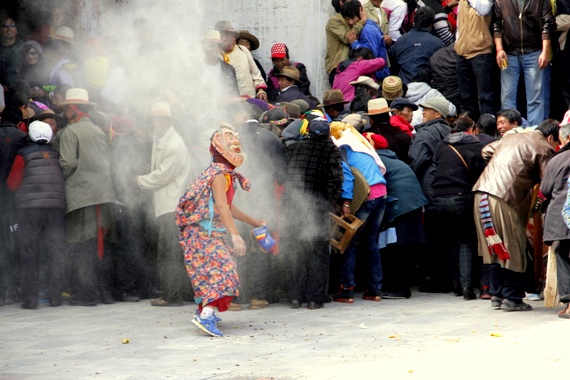 To let the audience know that the first half of the procession had come to a close, four monks wearing ladies dresses and old man masks ran around the monastery throwing fists of chalk powder all over anyone who dared remain. Sending guests running, giggling and squealing out the door, the monks tactics proved very effective. 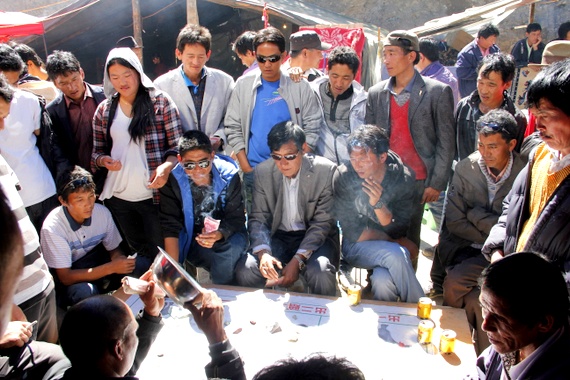 Outside the holy monastery it was a veritable carnival of shopping, food, dentistry (no joke, check the slideshow) and games. Little gambling booths like this with a board of animal pictures and matching dice drew intense contestants. Guys shouting, throwing money, and holding some serious poker faces made for the best people watching. 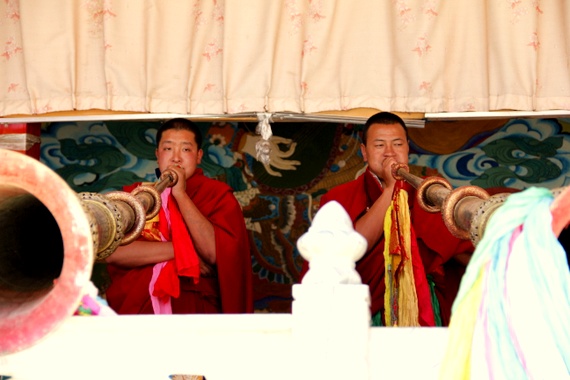 After an 90-minute break, the mask festival was ready to resume. These two monks opened up their pipes and let the farthest reaches of the valley know it was time for the second act. 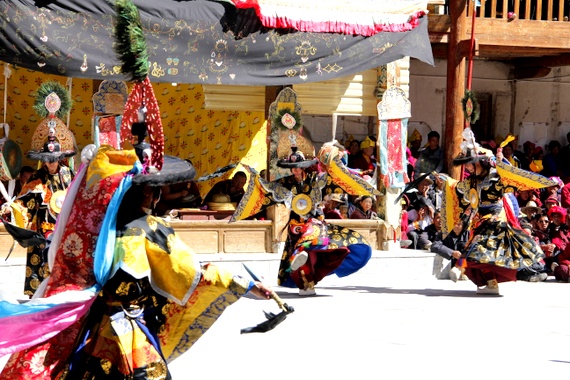 This quartet of dancers, donning very ornately carved wooden head-pieces and the most exquisite cloaks, each grasped a bundle of twine in one hand and a knife in the other (when we tried our normal game of “Chinese Charades” to clarify what those two items signified we didn’t come up with a definitive answer). 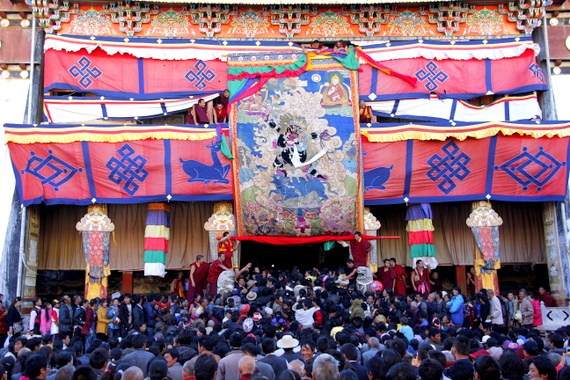 After a dozen more dances and a ceremony to cast out bad juju were performed, we all waited in great anticipation for the grand finale. Once a year and for one day only, this massive embroidered thangka is revealed to the devoted attendees of the Gedong Mask Festival. The crowd meditates on its beauty and symbolism for as long as they need to hold the image in their minds until next year then runs inside to pray and give offerings to Buddha. 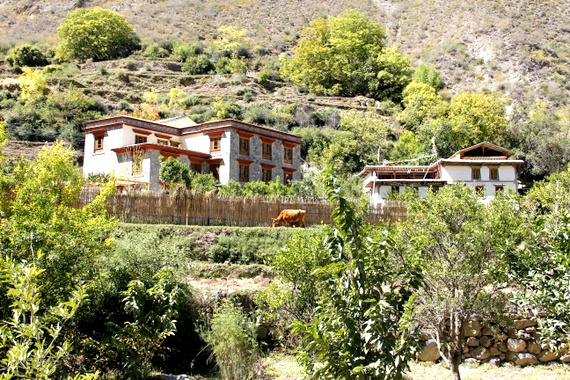 Heading back to Songtsam Benzilan our heads were spinning from the energy of the festival. The passion, devotion, and pageantry involved in Tibetan Buddhism was like nothing we’d ever seen and may never see again.

25 thoughts on “A Taste of Tibet: Diqing, China”